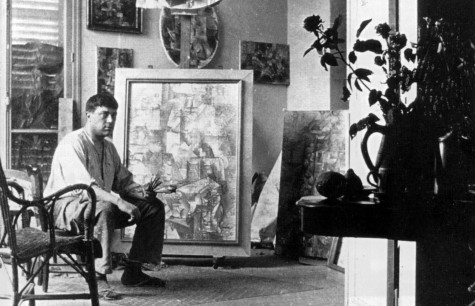 Pablo Picasso and Georges Bracque met in late 1907 in Paris. They were both in their early 20s and enthusiastic about the work of Cézanne and Gauguin, and African native art and tribal masks.  They began working together, to try to tackle artistic problems such as movement, perspective, and colour. By 1910, they were producing paintings using limited palettes, showing multiple facets of their subject matter, upon the basic flat plane of the canvas. They left many paintings unsigned, making it impossible to identify which of them was the artist. Their work was termed ‘Cubism’ by the art critic Louis Vauxcelles and their ideas were taken up by artists such as Juan Gris, Jean Metzinger and others. The Cubist movement lasted until around 1921, but its influence upon other artists, through to the present day, has been immense.

This book was produced as an exhibition catalogue. It concentrates solely on the period of ‘analytic’ or ‘high’ Cubism, developed during 1910–12, a two-year period of intense activity between the two artists. In the opening chapter, Kahng explains her choice of these artists and this very limited period of Cubism. Principally, the ready availability of Cubist work of this period within the United States reduced the cost of importing from Europe. Also, previously Cubist exhibitions had largely been the preserve of New York, with none before on the West Coast. Finally, she had the presence and support of experts in the field, Malcolm Warner, Jeffrey Weiss and Harry Cooper. She discusses previous exhibitions as comparisons, and summons up such luminaries as T. J. Clark,  John Golding, and Alfred Barr to ponder what she calls ‘the persistent uncertainty of the intentionality of the cubist experiment’. The remainder of the catalogue consists of five further essays by distinguished art historians.

You might think an exhibition catalogue would be aimed, at least in part, at the general public. Not so in this case. It is assumed that the reader has a considerable and deep knowledge, not merely of Cubism, but of modernist art and artists in general.

In ‘A Project for Wholeness’ Professor Charles Palermo considers the influence upon Picasso of Cézanne, and to a lesser extent, Henri Rousseau (Le Douanier). He compares a number of works from these artists, particularly Cézanne’s Still Life with Plaster Cupid (1895) and Picasso’s Composition with Skull (1908), in a discussion of their different approaches to the idea of autonomy within their work. Palermo defines autonomy for the purposes of his essay as ‘self-sufficiency, independence from the world’. He considers the relationship between the effects of size and shape in a painting and the nature of straightforward pictorial representation. He points up the use by the two artists of forms with which to show ‘autonomy’ or ‘self-sufficiency’ in the form of metaphors, in the same way that a cartoon of a famous politician may stress some unpleasant aspect of their character, and thus become both divorced from, yet inextricably connected to the real person. Palermo considers the ways that the sense of volume is conveyed and how the artists used allegory in their work. The essay as a whole is concerned with the problematic relationship of Picasso’s work to a notion of ‘completeness’.

In ‘Braque’s Ovals’, Harry Cooper, curator at the National Gallery of Art, Washington, is interested in the oval paintings of the two artists. The use of the oval format had been largely discarded by artists since the baroque period.  Cooper discusses the way that Cubist paintings tend to pull away from the edges of the framed work, with forms concentrated towards the centre. He suggests that oval paintings, especially still lifes, often take the shape of table tops tilted forward to offer their contents to the viewer. Looking glasses are often oval in shape, and he posits that behind every Cubist oval, lies an oval mirror. He also discusses the use, or lack of use, of horizontals and verticals in Bracque’s ovals. He points out owing to the differences in shape between circles and ellipses, the latter offer greater suggestion of movement and thus of dynamism.

Prints by Braque and Picasso from this period are limited in number and confined to those produced by dry-point and etching. They often merit comparison with an equivalent in oils. Annie Bourneuf’s discussion of these prints particularly concentrates on Picasso’s ClichéKahnweiler (1914). Daniel-Henry Kahnweiler was the artists’ dealer, and the instigator of much of their intaglio work created for use as book illustrations. These in turn helped to disseminate the work of artists in his stable.

In the early 20th century Russian artists and critics first identified ‘faktura’ – the materials from which a work of art is composed and the effects they have – in Cubism. Professor Christine Poggi notes that for Rodchenko, Tatlin, and the Productivists, faktura ‘came to stand for the erasure of the artist’s form-giving power in favour of discovering the structural possibilities inherent in the materials themselves’. Poggi discusses the work of  David Burliuk, Vladimir Markov, Kazimir Malevich, and Claude Lévi-Strauss. She points out that Cubism analysed nature in terms of planes rather than lines or colour, and that during the period covered by this exhibition, Picasso and Braque moved gradually away from the codes of illusion to those of ‘faktura’.

The volume is adequately rather than lavishly illustrated, though it must be said that when a painting which in reality measures 70 x 57 cm. is reduced to a tenth of that and then subjected to detailed analysis, it can make the argument difficult to follow unless the original happens to be hanging on your wall. Nonetheless, at £18 the catalogue is not overpriced, and one may expect to find it in a number of university libraries.

BUY Picasso and Braque FROM AMAZON