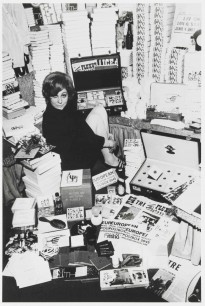 Although there were some individual precursors of Fluxus – Daniel Spoerri, Nam June Paik, George Brecht and La Monte Young – it was the Lithuanian-born George Maciunas (1931–78) who was the inventor of the term, and was its master-of-ceremonies or at least its postmaster-general. He began the Fluxus Press in 1961 and the circulation of ‘editioned objects’ through the international mails was one of its characteristics, as were the doctrine that art is inherent in everything and a belief in collectivity. Fluxus is perhaps the other side of Pop Art, although there was overlap: Robert Watts straddled both movements, and Claes Oldenburg contributed  False Food Selection  (1965–8) to the Flux Cabinet.

Gilbert and Lila Silverman, Detroit-based collectors, with the help of Jon Hendricks, assembled perhaps the most definitive collection of over 3,000 Fluxus works. It was given to the Museum of Modern Art, New York in 2008. The collection has been the subject of two earlier and smaller exhibitions at the Museum of Modern Art, once before and once after its acquisition. This is, by far, the largest exhibition – although only 91 captioned items are on display – and it is curated by Gretchen L. Wagner, Assistant Prints Curator at the Museum of Modern Art, with Jon Hendricks as Consulting Curator. Hendricks’ collecting for the Silvermans, his related publications and exhibitions have been perhaps the major influence on the way we see and understand Fluxus.

Despite the occasional pink and grey wall, ‘Thing /Thought’  (which takes its name from a George Brecht proposal for two pennants with these two words) is largely a white-cube presentation of Fluxus, where the scores are silent and are to some degree fetishized as art objects. Ben Vautier’s ‘Keine Kunst/Pas d’art/No Art’ (1964), intended to be a paper bag around an object declared not to be art, here becomes a poster. The digital version of the George Maciunas work  12 Big Names  (1975), which projects the names of Vito Acconci, Joseph Beuys, Andy Warhol, etc. lacks the accompanying sound effects of its 35mm slide original. Likewise the digital films, Yoko Ono’s silent film  Eyeblink  (1966), Albert M. Fine’s  Dance (1966), or Smoking  (1966) by Joe Jones  (1934–93)  do not quite reproduce the flicker effects or have the sounds of the original 16mm film in projection.

The working musical instruments help to reintroduce the playfulness and sounds of Fluxus – the electric motors of George Maciunas’  Aerophone  (1966) and Dancing Aerophone  (1972/3); Joe Jones’ Mechanical Violin (1964),  Violin in Bird Cage  (1965) and  Mechanical Bells  (1966) perform at regular intervals. In a nearby section, there is also Jones’  Small Wooden Zitar 3  (1970) and  Metal Zitar 4  (1971), acquired by the Museum in 2011 and not part of the Silverman collection, neither of them working as part of the ensemble.

And contrary to those who think Fluxus ended with the death of Maciunas, Fluxus artists, including some born the year of Maciunas’ death – Cory Arcangel and Anna Ostoya – have been invited to select and re-arrange objects from the two Fluxkits (1965–6). The first intervention was by the Japanese artist, Mieko Shiomi.

The star of the installation is undoubtedly Larry Miller’s and Hendricks’ recreation of Willem de Ridder’s Amsterdam Fluxshop from a photograph (winter 1964/5) by Wim van der Linden, with Dorothea Meijer seated amongst the contents of de Ridder’s European Mail-order Warehouse. Here are Ay-O’s  Finger Box,  Ben Vautier’s  Mystery Box  and  Keine Kunst  bag, George Brecht’s  Delivery Direction  and  Water Yam,  the collective  Fluxkit,  Fluxus newspapers and year boxes – as if this re-installation is itself an super-sized, grey Fluxus box.  There is some irony in the fact that the doctrine behind the editions was an attempt to escape the gallery system, and that Maciunas had a (serious) desire to overthrow the institutions of art by clogging up postal boxes with thousands of heavy bricks, addressed to galleries and artists, without stamps, complete with the return address of other museums and galleries.

It is also a shame that we are not told more about the Silvermans and their collecting preferences and earlier interest in Dada, and how Hendricks’ own collecting instincts interacted with theirs. There is no catalogue, perhaps because the Silverman collection has already been well documented by Hendricks.

Despite my minor quibbles, this is a witty but elegant exhibition, which allows the pieces freedom to tell their own story: these multiples/editions resonate disturbingly in a consumerist world, just as the labels of the Fluxus multiples jar with their contents.

BUY The Rise of the Sixties by Thomas Crow FROM AMAZON