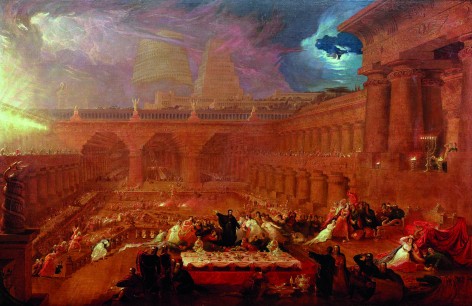 A visual extravaganza of colour, drama, theatricality and awesome splendour – this exhibition is all of that and more. John Martin (1789–1854) was a showman extraordinaire of art – not only its creation but its production, promotion and dissemination. From a poor family and with no formal training or education, he had the natural gift for capturing the imagination of the masses and became tremendously popular with his dramatic scenes of apocalypse and catastrophe.

The show raises important issues beyond the spectacle of the artworks themselves. What constitutes the ‘accepted’ canon of art? What is the role and status of the artist? What rights should artists have over their own works, including issues of copyright and reproduction? And what has been the impact and influence of Martin’s work on modern popular culture? There is so much packed into this exhibition that one visit is really not enough.

Martin polarized attitudes about art and gave rise to numerous dismissive criticisms by the art establishment, rooted in snobbery and prejudice. John Ruskin referred to him as a workman whose ‘works are merely a common manufacture’, while Samuel Taylor Coleridge described him as a ‘poor creature’ who ‘looked at Nature through bits of stained glass’. Inherent in these excoriating criticisms are allusions to his working-class background. The youngest of 13 children, he began his career as an apprentice to a coach painter in Newcastle upon Tyne. He then joined the studio of Boniface Musso, an Italian drawing-master, and two years later moved to London where he obtained employment decorating glass and china – hence Coleridge’s snide remark.

1812 marked the launch of his career as a major artist when he obtained his first literary review for Sadak in Search of the Waters of Oblivion (no. 8) exhibited at the Royal Academy. You could be forgiven for thinking this was a 20th-century fantasy painting reminiscent of Tolkien, with its towering masses of menacing mountains and rock formations, bringing to mind Mount Doom, and the struggling hero clinging on to a rock ledge – just. This is surreal and otherworldly with its limited colour range, strange lighting effects, strong contrasts and linear bolts of lightning – apparently drawn with a ruler. Deliberately designed as an attention-grabber, the portrait format, red tones and large size (183.2 x 131.1cm) ensured that it would not be overlooked on the crowded walls of the Academy.

Martin’s lack of training in oil painting is evident from his handling of the paint and instead of the usual techniques he tends to use solid blocks of colour. Unfortunately, the vibrancy of the colours is completely lost when reproduced in the catalogue. The same is true, sadly, for most of the other images. While I appreciate it is difficult to recreate a correct colour balance in print, these really are disappointing.

Martin achieved his greatest critical and financial success with his ‘blockbuster’ painting of Balthazzar’s Feast (no. 28), which was first shown at the British Institution’s exhibition of contemporary art in 1821. The combination of supernatural drama with the theme of decadence and moral degeneracy of a ruling monarch seemed to resonate with audiences of the day who flocked to see the painting – so much so that barriers had to be erected to protect it. (The current king was the unpopular George IV, the former Prince Regent.)

The painting was bought by Martin’s former employer, the glass-painter William Collins, who exhibited it in London and, the following year, in Glasgow and Edinburgh. Consequently it went on tour to just about every major town in Britain. Even before leaving London it was estimated that over 100,000 people had seen it. Accompanying the painting was a ‘descriptive pamphlet’ where Martin listed details of the buildings and identified the people depicted, which reflects a rather obsessive concern to validate his work and assert that the scale and proportions were correct. This pamphlet went through 13 editions in 1821 and by 1826 it had reached its forty-fifth edition.

Despite – or perhaps because of – the immense popularity of this work, it was dismissed by many leading artists and art connoisseurs as mere visual entertainment. Nevertheless, it was much copied, plagiarized and exploited – a sorry tale that is detailed in the catalogue to the Tate’s exhibition. Collins even took Martin to court for breach of contract when he produced an engraving of the painting. Martin successfully argued that the engraving was based on a painted sketch (no.29) and not on the finished work. These two are hung side by side and it is one of the strengths of the exhibition that many of the paintings are exhibited with their painted copies and even engraved versions, which is most illuminating.

As for the painting itself, while the ‘garish’ colours immediately draw the eye, and incidentally heighten the dramatic effect, it is the detail and range of content that retains the attention – so much is packed in. The more you look, the more you see. The centrepiece, in the foreground, is a beautifully laid out table complete with snowy white tablecloth and glittering gold tableware precisely laid out and perspectivily correct. This unnatural capsule of pristine civilization and calm is offset by the madness and mayhem in the rest of the picture. Figures writhe, flee and fall, fling their arms about and point, while a crocodile creeps out from under a drape. You can almost hear the deafening noise and wailing. The cause of all this melodrama is the magical writing in brilliant light on the very left edge of the painting.

Against the moody, dark red tones, the supernatural light is reflected by the gold dishes and illuminates the lush red carpet covering the empty throne, which glows like a jewel, emphasizing its vacancy and foretelling the death of the king. Sadly this effect is completely lost in the large reproduction in the catalogue, where the tonal balance is completely wrong, which is a great shame. Comparison of the finished work with the ‘painted sketch’ (no. 29) hung at the side demonstrates subtle differences; for example, the placement of the table has been changed with figures now obscuring its left edge, and the gold tableware is largely replaced by silver; there are fewer figures and the tonal range is more muted, less dramatic. This may possibly have been done with a view to intended printmaking.

There are many more fascinating paintings and much that can be said about them, not to mention the engravings, prints, engineering schemes and his later rather lyrical water colours, complete with a range of supporting material – pamphlets, letters, diary extracts and so on. The catalogue that accompanies the exhibition contains extensive information on all these aspects as well as the individual works. It is thought provoking and informative with lots of fascinating facts and details. The curator, Martin Myrone, is knowledgeable and enthusiastic and this comes across. Apart from his excellent introductory essay, there are four others covering different aspects of Martin’s work including printmaking, his engineering projects and the influence of his work on contemporary popular culture, film-makers and fantasy/sci-fi illustrators. There is also an account by Sarah Maisie of the restoration work she carried out on the wonderful Destruction of Pompeii and Herculaneum (1822).

Clearly John Martin was a complex artist. There is a dissonance in his work between the desire to appeal to the masses and the desire to be accepted by the art establishment. This tension does mar some of his works. The lack of confidence in his technical ability is revealed by too strong an adherence to mathematical draughtsmanship, such as the use of a ruler for depicting lightening and the gridwork layout of the tableware in Balthazarr’s Feast, and his obsessive need to justify the accuracy of his compositions by providing a key detailing the contents. There is also a clash between his fantastical imagery, such as is now familiar and in which he excelled, and more traditional depictions. He comes into his own with scenes of destruction, terror and awesomeness. His swirling vortexes of fire are reminiscent of Turner’s vortexes of cloud and snow (for example, Snow Storm, Hannibal and his Army Crossing the Alps or Childe Harold’s Pilgrimage) and it is instructive to visit these paintings in the Tate galleries after the exhibition. The Great Day of His Wrath (no.100) brings to mind William Blake’s The Tyger. His scenes of heaven, bliss and the saved are far less successful, however, bordering on the twee.

Altogether a fabulous exhibition, well designed, displayed and catalogued. Although the catalogue is certainly worth the investment – it is informative, detailed and well-researched – the images really cannot be truly appreciated visually from the poor reproductions in the catalogue alone. More than any other exhibition, this is one where the pictures really do have to be seen to be believed.

‘Apocalypse John Martin’ is at  Tate Britain, London until 15 January