Scott and Shackleton at the heart of the Antarctic 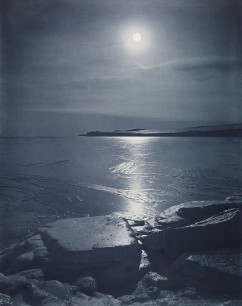 The Heart of the Great Alone: Scott, Shackleton and Antarctic Photography

This stunning exhibition of remarkable photographs taken by Herbert George Ponting and Frank Hurley in Antarctica marks the hundredth anniversary of Captain Scott’s ill-fated journey to the South Pole. First shown at the Queen’s Gallery, Palace of Holyroodhouse, Edinburgh (2 October 2009 – 11 April 2010), it is on show again now in the Queen’s Gallery, Buckingham Palace, London until 15 April 2012.

Ponting’s images depict Captain Scott’s  Terra Nova  expedition of 1910–13, the expedition that led to the death of five of the expedition team on their journey back from the South Pole.  Frank Hurley’s icescapes were photographed during Ernest Shackleton’s Polar expedition on  Endurance  in 1914–16. That expedition ended with the sea journey from Elephant Island to South Georgia.  The photographs were presented to King George V, which is how they became part of the Royal Photograph Collection and form the mainstay of the exhibition.

The number and size of the images hung in the gallery spaces give a sense of the sheer scale of the endeavour these men undertook. At the same time, there is an intimacy about this gallery that makes for hushed tones and a very personal engagement with the works. Ponting’s  Cirrus Clouds Over the Barne Glacier  caught my eye as soon as I walked in. Taken on 19 December 1911, it was printed onto orange paper in an attempt to recreate the colours Ponting saw in the sky that day. It’s a striking image, but for me the most captivating scenes shown were those endless images of white, of McMurdo Sound and dramatic icescapes.  The Ramparts of Mount Erebus  and the remoteness of  The Hut at Cape Evans  were equally striking and  The Terra Nova in McMudro Sound  is simply haunting.

Pack ice and pressure ridges leap out of one image after another. The sharpness of the contours and edges is often softened by windblown snow and by the very act of photographing it. This is not to suggest that these images lack intensity or seriousness, because they don’t. Perhaps that softening just makes them more bearable. When I visited the show a handful of small, earnest children peered into the frames and the cabinets, perhaps trying to make sense of what these men had gone through. I don’t suppose that those of us who are merely observers of sorts can ever hope to understand. And yet, this show surely reveals something of the endurance of the human spirit. It is a show for the would-be explorer and the wanderer.

A sense of the physical and psychological challenges faced by these men leaks out of every image. From the heroic to the mundane, their activities are recorded in the exhibition and the book that accompanies it through archival material, maps and photographic image. Explorer David Hempleman-Adams speaks from personal experience and provides an insightful introduction to the book. As one of the world’s most successful polar explorers, Hempleman-Adams is well qualified to introduce Ponting’s and Hurley’s evocative images. As he points out, the achievements of Scott and Shackleton around a century ago are all the more remarkable when we remember that they did not have the advantages of modern-day explorers; no satellite phone, no GPS, no sophisticated rescue services standing by. This book celebrates the spirit and the achievements of these most remarkable men. With informative essays from Sophie Gordon and Emma Stuart, it’s a gripping story and the photographs, perhaps, tell it as well as anything else. From psychological portraits, to nature photography, it is set to bring out the explorer in all of us.

The catalogue of The Heart of the Great Alone: Scott, Shackleton and Antarctic Photography  by David Hempleman-Adams, Sophie Gordon and Emma Stuartis published by Royal Collection Publications, London, 2009. 256 pp, over 220 illus, £29.95.ISBN: 978-1905686155

BUY The Heart of the Great Alone FROM AMAZON

‘The Heart of the Great Alone’is at The Queen’s Gallery, Buckingham Palace until 15 April 2012.