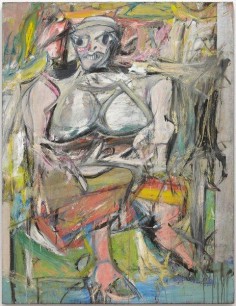 In 1926, Willem de Kooning left his native Netherlands and stowed away on a freighter bound for the United States. He wound up in New York, where he initially earned his living painting houses and copying old masters for a decorating firm. De Kooning (1904–97) is now widely considered one of the most important and revolutionary artists of the 20th century.

New York’s Museum of Modern Art (MoMA) is presenting the first major museum retrospective devoted to the full scope of de Kooning’s career. This is an enormous show, filling the entire sixth floor of MoMA, and a visitor could be forgiven for thinking that this is overkill.  How could any artist's lifework withstand the scrutiny of nearly 200 works?  It does, however, with less repetition than is often the case in such a huge retrospective, owing to the less than straightforward development of de Kooning as an artist.

Willem de Kooning was born in the Netherlands in 1904.  He was apprenticed at a young age to a commercial art firm and there, and at night school, he learned an extremely meticulous representational drawing technique, as well as how to mix paints and use techniques employed by professional decorators. After his arrival in the USA, he was initially drawn to the flat patterns in the paintings of Matisse and Giorgio de Chirico, whose work he saw on exhibition in New York.

In the mid-1930s he practised a Cubist-derived modernism inspired by his friends and acquaintances, the painters Stuart Davis, John Graham and Arshile Gorky, and through them by Picasso and Joan Miro. During the Great Depression of the 1930s, like many of these same American contemporaries, he was involved in government-sponsored Works Project Administration mural projects.

The exhibition carefully traces all these developments, from the Ingres-like pencil drawings of figures that de Kooning produced early in his career through to examples of his early abstract paintings.

De Kooning's first acclaimed solo show was in 1948, the same year that Jackson Pollock exhibited his first 'drip' paintings.  De Kooning's abstract compositions, many painted in black and white, established him as one of the Abstract Expressionists, a group of artists who shared a similarity of outlook rather than of style.  Their paintings were characterized by spontaneity of style and a spirit of revolt against tradition.  Just a few of the artists considered Abstract Expressionists along with de Kooning are Clyfford Still, Mark Rothko, Jackson Pollock, Robert Motherwell and Arshile Gorky.

What is made clear through the very detailed chronology in the exhibition's catalogue is that all the artists now considered part of the Abstract Expressionist movement of the mid-century knew each other.  They were friends or acquaintances and they drank together, visited each others’ studios, fell out, made up; it was both a social and a professional circle.  The younger artists also benefited from the friendships of European artists and writers, particularly the Surrealists, who took refuge in New York before and during the Second World War.

‘Spontaneity of style’ can, however be a misleading phrase, and among the best chapters in the exhibition catalogue are eight short, pithy 'Methods and Materials' essays that each look closely at one painting.  For instance, we learn that  Queen of Hearts  (mid-1940s), a painting that looks briskly produced, almost 'tossed off', reveals the evidence of de Kooning's rigorous training.  The background relies on the artist's experience in sign painting.  Its glossy surface has been achieved by much scraping and reworking, then rubbing down with pumice or fine grit sandpaper, then coating with a layer of natural resin. Nonetheless, with the figure of the woman de Kooning  ignored  conventional technique, and this too is carefully described.

De Kooning's figures of massive, grinning women cemented his reputation with an exhibition in 1953, which to this day draw criticisms of misogyny.  A friend of mine pooh-poohed that when she saw them for the first time.  She said, 'They look like sopranos on stage, just getting ready to launch into an aria from Wagner's Ring Cycle'.  You can see them as threatening, or as exuberant and full of vigour.

De Kooning  was closely scrutinized by the most influential critics of the day: Clement Greenberg and Harold Rosenberg (who coined the term Action Painting, probably with de Kooning in mind).  John Elderfield, the curator of the exhibition and the catalogue's main essayist, brings up these two critics frequently in his introductory essay, arguing that de Kooning's particular conception of pictorial space distinguishes him from the other Abstract Expressionists.

The 'Woman' paintings from the early 1950s are certainly the high point of the show, but tde Kooning continued painting for nearly 40 years and the exhibition carefully follows his work until his health declined and as his paintings become more like sparse drawings in colour.

This is a fascinating exhibition for anyone who is at all interested in 20th-century painting.  It may be a big show, but it's not intimidating.  The catalogue's chronology and short introductory essays to all the periods of the artist's work are very readable, while the essays by Elderfield would be appreciated by serious students of the period.

BUY American Art since 1945 FROM AMAZON

‘de Kooning: A Retrospective’ is at the Museum of Modern Art (MoMA) New York until  9 January 2012. For details of lectures and gallery talks visit the MoMa website on http://moma.org/visit/calendar/exhibitions/1149