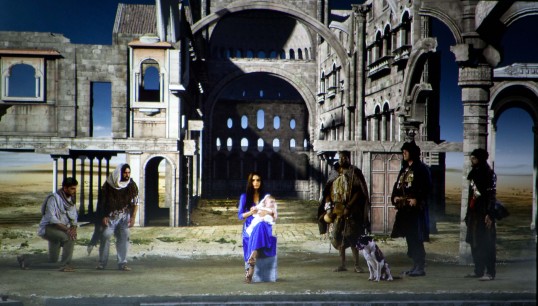 Long before the arrival of the current crop of  living statues and live performers, Covent Garden was recognized as a site of popular concourse and entertainment.  Contemporary visitors, native and foreign, may be destined for the Opera House or  London’s Transport Museum on the northern side of the piazza; they may meander  through the shops that have replaced the old flower and vegetable market, or visit the  new market; they may be heading for Inigo Jones’ St Paul’s church, the ‘actor’s church’,  to the south. They may bemoan the loss of the Theatre Museum, in passing. Whatever your purpose for a visit to London this festive season, you are advised to spend a few minutes at Nativity – ideally, on your way to, and again on your way back from, your  destination.

A triangular shed, with a steeply pitched, lapped timber roof and logged front (echoing  the ‘stable’ of the Biblical story), at the north-eastern corner of the piazza, houses a black box in which is installed ‘the world’s first digital painting’, the work of Martha  Fiennes and Peter Muggleston. Nativity performs the Christmas story, programming and  projecting it as a seemingly endless permutation of figurative, architectural and  environmental elements: visitors passing through are unlikely ever to experience exactly  the same representation twice.

Mary, as so often in Christian iconography, is dressed in lapis lazuli blue and sits in the foreground, centre stage. She wears sandals. Joseph, to her right,  sometimes stands, sometimes sits, and is sometimes not present at all. Jesus (a comfortingly chubby, ‘Bellini’ baby) is sometimes displayed, awake, facing towards his audience,  balanced on Mary’s knee. Sometimes he is cradled, sleeping, in her lap. Sometimes,  wrapped and swaddled, he is held protectively to Mary’s shoulder – a standard repertoire  of gestures and poses. The visitor may or may not witness a lumbering hound fall to his knees in homage. On my various visits to Nativity, I have seen two shepherds arriving together from the east and three men bearing gifts arriving,  disconcertingly, from the west. One man, carrying gold, is white (the Melchior of myth);  one is apparently from Arabia; a younger black man (Balthazar), awestruck, leads his  companions to the mother and child. I have even seen these visitors present  simultaneously, a licence permitted by previous  images of the narrative.

I have also seen the arrival of a regal, statuesque, turbanned figure – a queen, perhaps,  rather than a king. Thus Nativity works, through its mode of permutation, through  disparate versions of the Christmas story in oral reports prior to the record provided by  the Gospels (themselves at variance). The story is in flux rather than fixed. The visitors of the story may be witnessed by Nativity’s visitors by day, or by night under a star-studded sky, with or without a host of miniature angels aloft. Sometimes the  background recalls the desert of Palestine, sometimes the landscapes of the Renaissance Venetian painter, Giorgione, again  reminding the viewer of the transmutability of the story from a precise   geographical location to purposefully transplanted settings.

Dry leaves or snow wafts  across the screen;  on the soundtrack, there may be a version of the carol ‘Stille Nacht’;  there may be something less familiar to European ears. And there may be a baby, crying. Meanwhile, the middle ground architecture framing Mary morphs around her, just as,  historically and culturally, representations of ‘the stable’ have proved diverse. The viewer  is presented with a composite of drawings of architectural elements (columns, arches,  walls, canopies), ancient and modern, inserted into the landscape, rather than the  impression of a fixed, coherent, specific architectural space. Sometimes the framing is rudimentary, even ruinous; sometimes it evokes the glory of Constantinople or Rome.  The scene is domesticated by reminders of laundering – of swaddling clothes and of shrouds.

Nativitydeploys new technology (SLOimage) to achieve simultaneously a  sense of permanence alongside transience and mutation, of endurance and adaptation. It  recalls the video work of Bill Viola in both its theme and its methods – re-enactment;  slow-motion; high colour (here, blue and red are especially pronounced). Similarly,  technology is here applied effectively to purpose.