Getting high in New York City 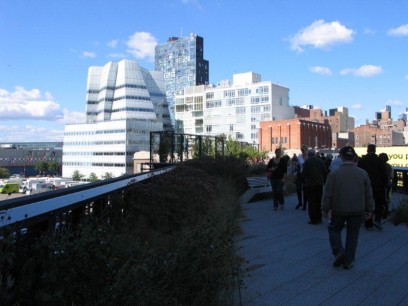 Friends of mine grew up in the 1950s and 1960s on the corner of West 22nd Street and Tenth Avenue in Manhattan.  At that time it was not the bustling Chelsea art scene that it is today, with its expensive real estate, but a rundown part of town with beautiful old town houses being quietly bought by artists and performing arts professionals with families and not a lot of money.

The children of these families were forbidden to cross Tenth Avenue (so of course they did).  On the other side of the avenue were warehouses and streets only busy in the daytime and they were deserted at night.  Over those streets loomed the High Line, the elevated railroad track that is now a park, the centre piece of a revitalized Chelsea.

The High Line was a freight rail line, in operation from 1934 to 1980, though I don’t remember ever seeing it in use in my childhood during my regular visits to 22nd Street.  It runs from the West Side rail yards outside Pennsylvania Station on West 34th Street to Gansevoort Street in what is still called the Meat Packing District. Here, there are still a few of the old meatpacking companies, though you’re more likely to see up-market fashion boutiques.

Trains on the High Line carried meat to the Meatpacking District, agricultural goods to factories and warehouses on the West Side and mail to the US Post Office’s big sorting facility on West 30th Steet.  The High Line actually runs through some of the buildings it delivered to, which has made its resurrection as a park all the more interesting.

The High Line, south of West 30th Street is owned by the City of New York and is under the jurisdiction of the Department of Parks & Recreation.  It was donated to the City by CSX Transportation, Inc., which still owns the northernmost section, close to the Pennsylvania Station rail yards at West 34th Street.

In the late 1990s, the High Line came under the threat of demolition.  By that time, the gentrification of the Chelsea neighbourhood was well under way. It was full of art galleries that had moved to the area from SoHo and restaurants were opening. Chelsea was a very popular (and increasingly expensive) part of town.

In 1999, two residents decided to found Friends of the High Line and the Friends successfully worked with Mayor Bloomberg’s administration and the New York City Council to reverse the policy favouring demolition.  The High Line is preserved through a Federal mechanism called rail-banking, which preserves transportation corridors, allowing them to be used as trails.  The land beneath the High Line is owned in parcels by New York State, New York city and more than 20 private property owners.

After the success of saving the High Line came the surveys and the planning to create an innovative new public space, with views of the Hudson River and the city skyline.  An environmental survey found that everything on it needed to be removed, right down to the steel and concrete structure; the High Line was redesigned into a safe public space.

In the autumn of 2004, after a design competition, the Friends of the High Line and the City of New York selected the landscape architecture firm of James Corner Field Operations and the architectural firm of Diller Scofidio + Renfro to head up the project.  They were joined by the planting designer Piet Oudolf and experts in the fields of horticulture, engineering, lighting, public art, cost estimating, maintenance, planning and security.

Before the park reconstruction began, all the rails were surveyed, tagged and stored at the northern end of the High Line and many have been reincorporated into the landscape as part of the design.  Before the project began, self-seeded grass, trees and other plants had grown on the rail tracks during the 25 years after the trains stopped running.  These were studied by the designers and now, 161 out of the 210 plant species in the design of the first part of the High Line, from Gansevoort Street to 20th Street, are native to New York.

The park’s design blends plant life with long narrow walkways with viewing platforms and gathering areas used for art exhibitions and educational programmes.  Art installations will become over time a major feature of the activities surrounding the High Line, which seems only appropriate, considering that it overshadows many of the galleries of Chelsea.  It has already become one of the must-see sights of New York City, whether you are interested in art gallery visiting or not.  The views are spectacular and the ambiance is a real delight.