Rodin, lovers and nothing but youth 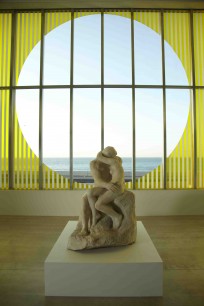 When the Turner Contemporary gallery in Margate opened for the first time in April 2011, there was a target of 150,000 visitors in the first year. In fact, 250,000 visits were made in the first six months, and that was before the arrival of Rodin’s The Kiss. Said to be the nation’s favourite sculpture, it is on loan from the Tate for almost 12 months, and has been placed in the Sunley Room so that it strikes you as soon as you enter.

The original sculpture, from 1888, is in the Musée Rodin, Paris, while a second was carved for the Exposition Universelle of 1889. It was the critic Solvay, rather than the artist, who christened it The Kiss. This third version was created by carvers Ganier, Rigaud, and Mather, associates of Auguste Rodin (1840–1917), for a wealthy American collector in 1904.  Edward Perry Warren, who lived in Lewes, Sussex promptly stored it in his stables, where it remained for ten years. Lewes Town Council, which had initially refused to display it publicly on the grounds that it was ‘too big and too nude’, eventually relented, and it was placed in the Town Hall in 1914. When war broke out it was promptly returned to the stables and covered with bales of straw to protect it.

The work was originally entitled Paulo et Francesca, and started life in Rodin’s mind as part of a series of relief carvings on the six-metre-high doors for a new museum, which he had been commissioned to produce. The designs were all based on characters in Dante’s Divine Comedy, and overall entitled The Gates of Hell. Many other of Rodin’s best-known sculptures are included in it, including The Thinker. The sculptor’s preference was for a pair of figures in contact with each other, such as a mother and child, or a centaur carrying off a woman.

This pair of naked lovers is taken from a true 13th-century story, which, like that of Romeo and Juliet, was popular in the 19th century. Gianciotto Malatesta, Lord of Rimini, asked his younger brother Paulo to entertain his wife,  Francesca. Although Paulo was himself married, he agreed, and together the couple read tales of courtly love, including the romance of Lancelot and Guinevere. As they did so, their passion emerged.  The book fell from Paulo’s hand as they embraced in a kiss, but, just as Dante had described, Gianciotto returned to discover them, and stabbed them both to death.

In the end, the plans for a new museum were abandoned, but instead the French Government commissioned two full-scale sculptures of Rodin’s much admired work.

Edward Warren died in 1928. He had lived what in those days was a notorious private life (he was openly gay), so his art collection fell out of favour, with The Kiss being largely ignored. Then in 1956 it was purchased by the Tate for £7,500, to save it for the nation. This is only the third time it has left London since then. In 1999 it returned to Lewes for an exhibition of Rodin’s work. In 2008, it went to Liverpool when that city was European Capital of Culture. Now, until September 2012, it takes pride of place at the Turner Contemporary.

In the five galleries upstairs is the second exhibition at the TC, called ‘Nothing in the World but Youth’ which is a quote from Oscar Wilde’s novel ‘The Picture of Dorian Gray’. To acknowledge this, in amongst the very large number of exhibits – too many to see at a single visit – is a portrait of Lord Alfred Douglas, Wilde’s lover ‘Bosie’, painted by Elizabeth Peyton, in the Corridor Gallery.

The thrust of the whole exhibition is to explore how artists have portrayed youth in the 20th century. For example, works in the North Gallery relate to the way in which young people discover and develop their identities during adolescence. Thus there are photos culled from CCTV footage by Martin Brand, to demonstrate how young people find themselves constantly monitored. There is Peter Blake’s Self-Portrait with Badges, to show an adult clinging on to youth. There are drawings by a nine-year-old J.M.W. Turner, of Margate and nearby Minster. And there is a video installation by Phil Collins to demonstrate the phenomenon of fan devotion.

The works in the South gallery are aimed at reflecting the tension between emerging responsibilities and rebellion. There is photographic work by Craig Ames, Chris Killip and Don McCullin, as well as Dexter Dalwood’s Poll Tax Riots. Another video installation by Mark Leckey captures the spirit of collective abandon that music makes possible.

Finally, in the Balcony Gallery can be found the 'Teenage Wildlife Vidéothèque’, a selection of DVD’s put together by Esther Johnson, which visitors can choose to play, and which range from the 1920s to the present day, covering drama, documentary, travelogue, and artists’ film and video.

One criticism of the TC’s opening exhibition was that there were so few exhibits on show. That certainly can’t be said of this current exhibition, which runs till 8 January. It would take hours, or several visits, to take it all in. In addition the gallery is now in full swing. For this exhibition there are tours, family events, and the TC has linked up with BBC radio Kent, for talks with artists and others every Saturday. For the gallery as a whole, there are adult and youth workshops, a Saturday Studio, a series of talks by the likes of Peter Blake, film showings, and much more. From January to May, the main exhibition will be ‘Turner and the Elements’, with Tracey Emin promised for later in 2012.