The diversity and range of Gerhard Richter 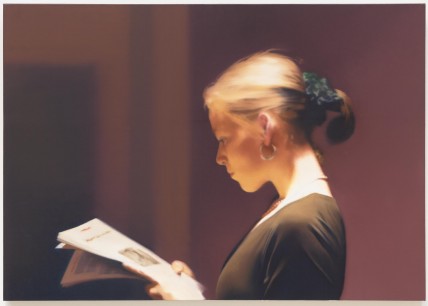 ‘Panorama’ is a comprehensive retrospective of a half-century-worth of work, mostly paintings, by the German artist Gerhard Richter (b. 1932). Richter’s work is characterized by its sheer diversity, and this exhibition does a good job of capturing that. From the start of his career are paintings based on photographs, either taken from magazines and newspapers or from his own personal collection, such as family albums. In this way, his early photorealist works (although, to my mind, these works aren’t precisely photorealist) both reflect upon the post-war expansion of consumer culture in West Germany and attempt to engage with the recent legacy of Nazism.

Early on, however, another practice that takes abstraction as its leitmotif became present in Richter’s work. These early abstractions mostly tend to be minimal in their procedures, comprising canvases that enlarge readily available colour charts and grey monochromes. While these two sides remain the bedrock of Richter’s practice, the exhibition gives a clear overview that shows how they have developed over half a century.

The retrospective takes a chronological approach to Richter’s extensive body of work, starting from 1961, when the artist relocated from East Germany to the West. This chronology is complicated, though, by the inclusion of numerous works on paper from 1957, which are seemingly sidelined in room 11. Nonetheless, the chronological overview provides a strong narrative that threads the works – numbering over 100 pieces – together. It provides a framework that allows one to see the disparities, the frequent sharp oscillations between the wholly abstract and the photorealist paintings, in Richter’s practice. At times this chronological narrative can feel slightly top-heavy insofar as the early rooms present more explanatory texts than the later rooms, but this perhaps reflects the way that Richter’s practice is less of a serial development than a circling around of a cluster of themes and methods.

The hanging allows surprises and enjoyable confusion in the way that it accentuates the formal disparities. For instance, room 6 features seven works, but the relationship between them is almost baffling. Hung here are large brightly coloured abstracts (which are something of a shock after the monochrome works shown up to this point), the 1977 picture Betty and a small painting of flowers from the same year, and a large mirror piece. The abstracts are big and brash, the photorealist canvases intimate, and the mirror is peculiarly mysterious in its minimalism. This conjunction is appropriately divergent, made all the more so in that the photorealist paintings date to the 1977 and the abstracts to 1982–3, and curiously unexplained by the wall text (I almost wanted something that would reconcile this divergence), but nonetheless very effective.

For me, the most stunning moment of the exhibition is the room dedicated to the ‘October 18, 1977’ cycle of paintings that depict the Baader-Meinhof Group in life and death. Because this work is a set of 15 paintings, it’s naturally not easy for it to be shown in locations other than its home at New York’s Museum of Modern Art. Seeing it here in London is a rare pleasure. The function of repetition is especially interesting in this cycle, as if Richter is attempting to expose something in the paintings that resists being shown or operates just below the level of visibility.

Having just come through Richter’s bright abstract canvases and delicate photorealist works, the Baader-Meinhof paintings are quietly visceral in both subject matter and painterly technique. It’s only to be expected that this room feels more unified than the previous rooms, especially after the diversity of room 6. These paintings are a return to Richter’s roughened black-and-white photorealist paintings of the 1960s, which traced the legacy of Nazism in both national and familial contexts. That is to say, photorealism, so stark in the 1988 version of Betty, which was painted around the same time, is almost sidelined here for a painterly handling that flickers between the materiality of paint and the photographic blur. Greyness signalled indifference, according to Richter at an earlier stage of his career, but in the Baader-Meinhof paintings it seems to be imposing distance on the viewer. You can’t be sure if the semi-abstractness of these figurative representations is evidence of a metaphorical veil – connoting cultural memory  or cultural amnesia – being torn through or put in place.

Once I had passed through the Baader-Meinhof paintings I felt, in some respects, that the exhibition begun to tail off somewhat, as if the chronological arrangement was not able to cope with Richter’s highly divergent practices. Whilst the quality of the works remains high, a sense of disorder or exhaustion enters into the final rooms of the exhibition. The dimly lit eleventh room seems to exist as a space for works that were difficult to present elsewhere in the exhibition. One wall is dominated by the pages of War Cut (2004) and the other by photographs – black-and-white close-ups of his own paintings – taken by Richter when he was teaching in Halifax, Canada in 1978. Placed in between these are semi-abstract linocuts, all uniformly of 29.5 x 21cm, from 1957. The inclusion of these works gently questions the tendency – which largely stems from Richter himself – to take his year of arrival in the West, 1961 as a Stunde Null (‘zero hour’) in his career by reminding us that there is a largely under-examined pre-history in East Germany. Indeed, there is a sense that the 1957 linocuts are included in the exhibition but not given a significant amount of consideration, which is a shame as they provide a glimpse into the artist’s development during his twenties. It’s a question of making that glimpse into real insight.

The single-artist exhibition is a format with inherent difficulties for analysing the artist concerned – it allows no opportunity for productive dialogue, collaboration, or contestation with other artists. ‘Panorama’ is no exception to this and, despite brief references to his participation with Konrad Lueg, Sigmar Polke, and Blinky Palermo in different art projects, the retrospective tends to create the romantic illusion of Richter as a lone artist. A curious issue, for me, is Mark Godfrey’s repeated description, in the catalogue, of Ema as a ‘refutation’ of Duchamp’s Nude Descending a Staircase, No. 2 (1912). In what way Richter’s painting is a ‘refutation’ is never properly or justified, but it seems to cast the complex relation between Richter and Duchamp in the wrong light. Duchamp was convinced that painting had not only reached the limit of its historical development but also looked minor next to the new industrial and artistic forms emerging in the early 20th century. If Godfrey’s claim is that this is ‘refuted’ by Richter’s painting then this is problematic to say the least. It also fails to acknowledge that Richter’s painting has, at times, been animated by the sense of painting’s obsolescence or by protracted uncertainty about its contemporary vitality and validity. In effect, staging Ema as a refutation – even with the artist’s blessing – downplays the scepticism that has been central to Richter’s art and life.

The exhibition catalogue is edited by Mark Godfrey and Nicholas Serota with Dorothée Brill and Camille Morineau. It features contributions by all the editors as well by Achim Borchardt-Hume, Amy Dickson, Rachel Haidu, and Christine Mehring. While the catalogue feels less weighty in the hand than the 2002 MoMA retrospective catalogue, which provides an extensive critical-biographical essay by Robert Storr, the inclusion of several voices in the Tate catalogue offers a more rounded approach. The catalogue has the benefit of tackling works that couldn’t be included within ‘Panorama’, such as, for instance, the stained glass windows installed in Cologne Cathedral (2007). It brings into sharper focus Richter’s productive relationships with Lueg, Polke and Palermo.

This is the fourth major London exhibition of Richter’s works in under a decade, with previous exhibitions held at Whitechapel Gallery (‘Atlas Project’, 2003–4), Serpentine Gallery (‘4900 Colours: Version II’, 2008), and the National Portrait Gallery (‘Gerhard Richter: Portraits, 2009’). In size and ambition, however, it surpasses these exhibitions and is more directly comparable to the 2002 retrospective held at the Museum of Modern Art in New York (‘Gerhard Richter: Forty Years’, 2002). As a formidable showing of Richter’s work, presenting him as one of the most important artists of the post-war legacy, it looks set to stand as the most important Richter exhibition in this country for quite some time.

For people who enjoy the exhibition but are new to Richter and want to follow up on the literature connected with his work, this catalogue would make a good purchase alongside Robert Storr’s very readable and lively account of Richter’s life and work, Gerhard Richter: Doubt and Belief in Painting (which reproduces his 2002 catalogue text and his extended essay on October 18 1977). For a more academic account, there is Gerhard Richter: The October Files, an anthology of critical essays selected by Benjamin H. D. Buchloh.

For those who want to know more about the art of the 1960s and 1970s, a good straightforward introduction is New Art in the 60s and 70s: Redefining Reality by Anne Rorimer (Thames and Hudson)

‘Gerhard Richter: Panorama’ is at Tate Modern, London, until 8 January 2012