Paying for salvation in Renaissance Florence 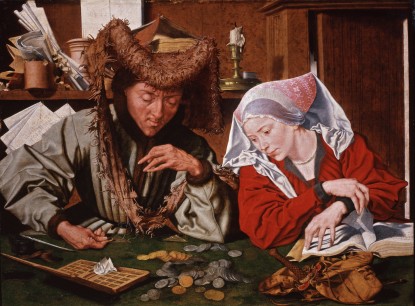 Money and Beauty: Bankers, Botticelli and the Bonfire of the Vanities

On a perfect autumn day we walked along the broad via Tornabuoni, which is lined with modern palazzi to brands such as Ferragamo and Prada.  Our goal was the  Palazzo Strozzi,  more fortress than palazzo, but currently the home of the exhibition entitled ‘Money and Beauty: Bankers, Botticelli and the Bonfire of the Vanities’ (‘Denaro e Bellezza: i banchieri, Botticelli e il rogo delle vanità’), which runs until 22 January and is installed in the vast, elegant rooms on the piano nobile.

The little handbooks, printed in blue with tiny illustrations, were only available in Russian or Japanese but the room texts are in Italian and English and provide a lively background to the subject, which is of course alarmingly topical.  James Bradburne, the Director of the Palazzo had the inspired idea, and the development of the link between art and its patrons is in the capable hands of the curators, Ludovica Sebregondi and writer Tim Parks.    The first provides art historical backgrounds and the latter a modern comment on the exhibits and the history of banking.

A single gold florin  (fiorino)  dated November 1252 with an image of St John the Baptist (patron saint of Florence) on the recto and the Medici/Florentine lily on the verso opens the exhibition, emphasizing the dual theme of piety and commerce.   Florence, with its history of banking, is the ideal source for exhibits – purses (no pockets at that time) and safe boxes with secret locks  – account books (often headed with biblical texts) and maps, etc.  Sections on  Exchange, International Trade (a reminder of the other parts of the world that were part of the story), Usury (realistically represented by a version of The Usurers by Martin van Reymerswaele), Sumptuary Laws and so on, all examine how money enabled but had to be restrained.

Along with the practical side runs the history of how art was used to salve the consciences of the bankers and usurers.  They funded artists such as Botticelli to paint altarpieces for churches.  Then we see how the tide turned, and private worship became popular. The artists provided works for private chapels. Behind it all was the fear of hell – and Francesco di Marco Datini, (Iris Origo’s Merchant of Prato) went on a pilgrimage, bemoaning the cost of indulgences and so on.  I returned home to reread this excellent book, which amplifies aspects of this exhibition.

And then we come to ‘Crisis’, when the two worlds clashed with the advent of Savanarola in the late 15th century. His two bonfires of the vanities in the Piazza della Signoria (where he was to end his life in another sort of bonfire on 23 May 1498) consumed works of art (including drawings of nude figures by Fra Bartolomeo and maybe even  a painting of a ‘a very nude woman’  by Botticelli).   The effect on Botticelli – hitherto a creature of the all-powerful Medici – was radical. His style reverted to gothic shapes and the perception of a kind of purity in mediaeval art. The National Gallery in London has his Mystic Nativity (1501), which was once the subject of a fascinating small exhibition there.

The last painting in the exhibition here is La Calumnia of 1497 – a wild rush of figures towards King Midas against a static background of classical statuary.  Botticelli’s death on 17 May 1510 marks the end date for the exhibition.

Visitors can take part in an interactive game called ‘Follow the Florins’ and the programme of events was family friendly.  There was a 10 euro brief catalogue (in Italian and English) containing the room introductions and well illustrated. Hopefully the little booklets (free)  will be available in more languages before  the exhibition ends.

We enjoyed ourselves so much that there was not enough time for ‘Declining Democracy’ , a modern take on the subject included in the 10 euro entry ticket.

We left, reflecting on the pleasures and lessons of the exhibition.  Glad that we had previously visited San Marco and seen Savanarola’s cell, bible, etc., we made our way to Santa Maria Novella to wonder at the frescoes  by Filippino Lippi (for the Strozzi chapel) and the amazing frescoes by Ghirlandaio for the Tornabuoni family, behind the high altar.  Among the familiar bible characters you find members of the family – a perfect example of how money buys you beauty, and, hopefully, salvation.

BUY The Merchant of Prato FROM AMAZON