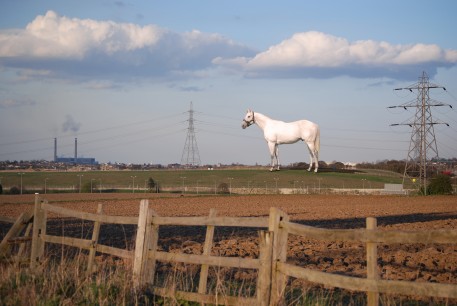 Mark Wallinger first came to prominence in the 1990s in the company of that flurry of artists marketed as the yBas (young British artists), but has subsequently managed to avoid any close association with that labelling.  He has also avoided the dubious implications of becoming a celebrity and to that extent gained a more valuable international recognition as an artist of stature and originality.  His work was selected for the spare plinth on London’s Trafalgar Square in 1991, he represented Britain at the Venice Biennale in 2001 and won the Turner Prize in 2007. This is a timely account of Mark Wallinger’s work at his point of mid-career.

If you begin this book at the end, you will come across a schedule of unrealized projects, which illustrates the prodigious flow of ideas that are as intriguingly indicative of Wallinger’s creative processes as the pieces that actually came to fruition. We have yet to see if the proposal for the 52-metre-high Ebbsfleet White Horse is destined to join that distinguished list.  Although the descriptions, ‘variety’ and ‘unpredictability’ seem particularly appropriate to his production, Martin Herbert, in this attractively presented and thoroughly researched book, identifies a number of consistent themes.

A critical interrogation of English identity, the questioning of whose history is being retold and manipulated, was present early on. In  A Model History  (1987) a model of Stonehenge was recreated out of building bricks, at a time when the authorities were preventing modern day Druids from celebrating the solstice at the ancient site.  Herbert helpfully guides the reader through the sometimes oblique visual and verbal associations of each piece and supplies many of the social and political references that would have been more familiar to the exhibition visitor of the day.

In Capital  (1990), Wallinger painted, in a traditional and accomplished oil technique, a series of full-length portraits, representing London’s homeless people, posed in front of the grand doorways of the City’s financial institutions.  Horse racing has also provided him with a rich source of imagery as a means for questioning the complex intermingling between structures of class, property and power, starting with a series of closely studied portraits of horses that look back to the work of the 18th-century British painter, George Stubbs.  Artists and other denizens of the art world, as Wallinger  complains, are not expected, as he is, to be also profoundly interested in sport. In fact, he owns a share in a race horse but, as an indication of his concern to integrate both strands of his life, when registering his colours with the Jockey Club he selected the purple, green and white of the Suffragettes, referencing the death of the protester Emily Davison on the Epsom race course.

Another recurrent theme in his work is that of religion. He seeks to draw on the metaphysical profundity and moral purpose that can still be found in traditions of belief, but which seem to have progressively drained away from other areas of contemporary human experience. This quality emerges in Ecce Homo, a life size statue of a man of today, standing humble and vulnerable before the crowd below on Trafalgar Square, in the pose of Christ exposed to the judgement of the people.  This was put up at the time of the Millennium celebrations, when the government was determinedly underplaying the connection of the event with the duration of Christianity.

Wallinger points to the same collapse of widespread, moral integrity in the depletion of popular political protest.  When the peace campaigner, the late Brian Haw, maintained his daily site of agitation outside the Houses of Parliament, he seemed like the last exponent of that inherent British tradition of dissent.  Soon after his forced removal by the police, his entire, makeshift camp was recreated by Wallinger in the Tate Britain gallery as his submission for the Turner Prize show.  This must surely be acknowledged as marking the very finest line ever between art and politics.

The exhibition visitor, the respondent to Wallinger, the questioning artist, is generally expected to take time and devote effort into the interpretation of the overlaid references in his work.  This book is a valuable guide into Wallinger’s world. Appendices include a select bibliography, exhibition list and a selection of the engaging writings of an artist who once listed his heroes as John McEnroe and James Joyce.