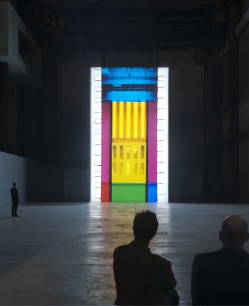 The Unilever Series is an annual event at Tate Modern in London.  The series, a commission of new works by contemporary artists, to be sited in the Turbine Hall, started in 2000 with Louise Bourgeois' 'spider', Maman and in 2011 Ai Weiwei exhibited Sunflower Seeds.  The commissions frequently address issues that are current and Tacita Dean's work Film currently being exhibited in this year’s Unilever series is no exception.

Filmis film, writ large – an immediate, strong statement; one that confidently challenges the audience to consider the film medium and its longevity.  On entering the vast space of the Turbine Hall there appears to be nothing taking place, there is no soundtrack and as you advance down the darkened slope it is only at the far end of the Hall that the projection comes into view.  Film is projected in a 'portrait' format, rather than the more usual 'landscape' format, and the full height of the Turbine Hall is used so that the projection towers over the audience.

Here Dean has challenged our expectations of viewing films, which are more usually seen in High Street cinemas as a landscape, viewed horizontally.  Dean has rotated the projection 90 degrees and this immediately, and remarkably, alters the cinematic experience. In doing this she brings us back to the Turbine Hall itself to admire its height and its particular kind of industrial grandeur.  Dean establishes an 'image-repertoire' in the 11-minute length of the film; one that is composed of a variety of images – from mushrooms to rivers – montaged and cut together in a vertical flow.

A number of the images seen in Film have clear points of reference to the architecture of the Turbine Hall and to Tate Modern itself. This is structured, again, horizontally to further divide the vertical flow.   As there is no conventional narrative in this visual 'play' the images themselves have the function of narrating the work.  In one sequence, a bubble descends from the top of the screen to the bottom while montaged into the same frame are the tall windows of a building; this device is used to divide the screen horizontally whilst the descending bubble is a reminder of the film's continuity.  Dean's structured 'play' throughout Film is just that – one that explores the nature of film itself; the sprockets that are projected as part of the overall image are a constant reminder of this.  In spite of its seemingly quiet presentation,  Film holds its own in this vast space with its clever reference to its own nature as film and its own siting, in the Turbine Hall.

Tacita Dean has been and is one of the most interesting artists of her generation – sometimes mistakenly aligned with the grouping of ‘young British artists’.  Instead, Dean has followed her own more idiosyncratic path, which has encompassed large-scale work in Europe and America from her base in Berlin. In 1998 she was nominated for the Turner Prize at a time when relatively few people in the UK were aware of her.   There is now no denying her stature and position in contemporary art practice as she has taken one of its most important international stages at Tate Modern.

Overall Dean's work can be hard to define. She has used various media, including drawing, sculpture, and of course, film.  Her work has a consistent approach: one that is subtle and concerned with narrative and narration.  In recent years her films have seemed to conform to a 'documentary' format. For example, in  Presentation Sisters  (2005) she observed the life of nuns in a convent in Cork, Ireland. But that definition is not adequate to the personal and what can only be described as loving approach she has to her subjects.

A number of Dean's previous works are concerned with the technologies she uses; Foley Artist (1996) celebrates the 'hidden' skills of film production whilst Kodak (2006) records the last days of the Kodak factory in Europe, at Chalon-sur-Saone in France.  Now, given this platform, Dean has used the Turbine Hall to draw attention to an issue of concern to her and her artist-filmmaker contemporaries.  Sometimes now referred to as 'analogue' film, the medium that Dean herself has used consistently and a medium that is now threatened by dwindling resources as economic forces lead the market toward the exclusive use of digital formats.

This showing of Film at Tate Modern is timely as now it is less possible to use traditional film formats in small-scale productions to produce innovative and experimental work.  The same applies to the filmic innovations of the recent historical past, some of whose qualities are lost in their transfer to digital formats.  These factors reduce, rather than expand, the choices for both filmmakers and their audiences, having an impact on what we see and understand to be film.  These real economic factors and their cultural effects are those that Dean's work in the Turbine Hall, and her own statements about it, directly address.  Film  itself does nothing if not allow its audience to luxuriate in the flow of the film grain.

There is already a substantial history of artists' film since the medium itself became available.  This reached new audiences and created distinct approaches to the form during the 1970s, when film was seen to explore formal concerns in much the same way as, and having equal status to, painting.  The work of the Structuralist filmmakers in Canada and those at the London Film Makers Co-op is a history that Dean is drawing upon, and to which she refers.

In showing the film sprockets as part of the film itself Dean refers to an intervention used by many artists but memorably by Annabel Nicolson, whose short film of 1971, Slides, explored the material of the filmstrip itself – including the sprockets.  Recently, artists have concerned themselves with film narrative and its construction and often refer to popular film and television genres, using similarly 'high end' production values to mimic these more recognizable forms.

It can seem that this work and its sophisticated use of digital formats has forgotten its origins; clearly Dean has not.  She uses some very early and well-used techniques to bring us back to the material nature of the medium itself and has chosen to use no post-production techniques other than straightforward editing.  In this way Dean's work can be seen to counter some strands in contemporary artists' film, where methods and mechanisms of production are concealed.

Unlike painting, where traditionally much emphasis is placed on the skill of the artist, film or moving image work and its close relation to cinema leads viewers to expect that they will be led into what has been described as a 'magical' space – one that relies on its mimetic qualities, its resemblance to or imitation of reality.  Dean, in Film,has chosen to do otherwise and offers a rich and 'purely' visual cinematic experience, and presents a reality that is not only, literally, larger than life but is life as film, writ large.

The Unilever Series: Tacita Dean, is on at Tate Modern, Bankside, London until 11 March.