Leeds Art Fund: A century’s worth of art in our time 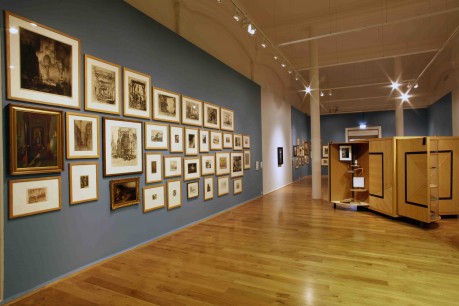 The first group in Leeds that attempted to build a collection of art by subscription was, by all accounts, a disaster. The Leeds Art Union was established in 1855 as an attempt to reconstitute the failed Leeds Academy of Arts, whose three exhibitions between 1853 and 1855 had been increasingly chaotic, culminating with the work of 140 artists being impounded by the Great Northern Railway Company as security against an unpaid debt.

Fortunately, the Leeds Art Fund (LAF) has fared rather better. Established in 1912 by Frank Rutter of Leeds City Art Gallery and Michael Sadler, Vice-Chancellor of the University of Leeds, the charity continues to operate as one of the oldest organizations of its kind. Its current chairman is Ben Read.  Leeds Art Gallery provides the perfect venue for a celebration of the centenary of the LAF, with displays used to illustrate the breadth, quality and foresight represented by the acquisitions made over the last hundred years.

The White Room Gallery showcases the collection of modern and contemporary works, including notable examples by Henry Moore and Barbara Hepworth as two of Yorkshire’s most celebrated artistic offspring. In addition to works that have seldom been seen on display, familiar works have been successfully shown in  a fresh light. For instance, a sprawling aluminium sculpture by Eduardo Paolozzi, Poem for the Trio MRT (1964)  (MRT refers to the Russian Constructivist artists Kazimir Malevich (1879–1935), Alexander Rodchenko (1891–1956) and Vladimir Tatlin (1885-1953)) has been a familiar feature of the entrance space at Leeds Art Gallery for some time. It has particularly benefited in this show from a setting that encourages the regular visitor to reassess this sculpture in a different context.

A rare display of Susan Hiller’s Monument (1980–1) is a particular highlight of this gallery, a work that displays 41 photographs of memorial plaques from Postman’s Park in London, alongside a park bench on which the visitor is invited to sit and listen to a commentary provided by Hiller through headphones, becoming part of the installation as they do so.

The Small Lyons Gallery contains the modernist mural designs proposed for Leeds Town Hall in 1920. Commissioned by Michael Sadler, seven artists were invited to submit designs for a new interior decorative scheme, which was also to serve as a commemorative response to the First World War. Both local and national, established and emerging artists had been selected, including Jacob Kramer, Stanley Spencer and the brothers John and Paul Nash. The work of Paul Nash, titled The Quarry, has been reproduced and enlarged to fill a whole wall of the gallery, which indicates something of the what the final, full-sized mural would have looked like, had it ever been realized. It is contrasted with the small watercolour of the imagined interior by the architect Cuthbert Broderick, whose mid-nineteenth-century designs attempted to invest this civic building in an industrial borough with the status and grandeur of a Renaissance palazzo. Both the conception and ultimate rejection of Nash’s project provide a fascinating insight into the politics of the period.

Since reopening after a significant refurbishment in 2007, Leeds Art Gallery appears to have fostered a renewed confidence in its collections. These works had previously been relegated to the careworn galleries upstairs, which have since been renovated to house temporary exhibitions. This assurance was perhaps bolstered by the success of Leo Fitzmaurice, winner of the 2011 Northern Art Prize, whose work Horizon (Leeds) appropriated long-forgotten landscape paintings from the stores, matching the line of their horizons to create a fragmented jigsaw.

A similar strategy of clustering works together appears to have informed the display of prints and small paintings from the LAF collection in the Large Lyons Gallery. With a nod to the salon tradition of hanging works from floor to ceiling in close proximity, this arrangement really facilitates interesting comparisons between works that would otherwise be considered non-comparable.

All in all, a most interesting exhibition.

Art in our Time: The Centenary Exhibition of the Leeds Art Fund is on until 26 August 2012 at the Leeds Art Gallery, The Headrow, Leeds, West Yorkshire LS1 3AA

A catalogue of the Leeds Art Fund collection will be available later this year.

Also showing 'Fiona Rae: Maybe you can live on the moon in the next century'. Opening at Leeds Art Gallery, from 11 May until 26 August 2012