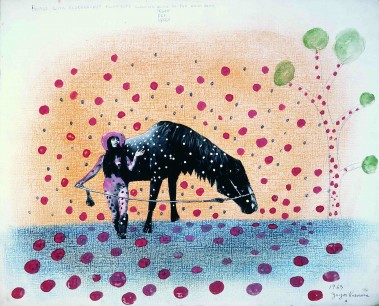 ‘Yayoi Kusama’ at Tate Modernis the first large-scale retrospective of this leading Japanese artist’s work. It traverses Kusama’s entire career of avant-garde experimentation and exploration of different mediums and strategies:  installations, notorious ‘Kusama Happenings’ and performance art from the mid-1960s, body painting, film, fashion – she set up a boutique to sell her designs in April 1969 – embracing political and anti-war protest and 1960s hippie counterculture.

Each room offers a relatively discrete encounter with a different episode of Kusama’s work. Together they span over 60 years of artistic labour and endeavour.

In her catalogue essay, Frances Morris, curator of the show, comments that the narrative of Kusama’s career is an ebb and flow between East and West. She was born on 2 March 1929 in Matsumoto City, a provincial town 130 miles west of Tokyo; she left Japan for Seattle on 18 November 1957, returning to her native country in 1973, by then, ‘as famous as Andy Warhol’.

In November 1955 she wrote to Georgia O’Keeffe seeking advice on how to live the ‘long difficult life of a painter’, expressing her ambitions for an artistic career in America: her ‘future lay in New York’. Letters from O’Keeffe are included in the exhibition as are sketchbooks, letters, original photographs, and exhibition catalogues documenting her career. Kusama’s autobiography, Infinity Net (now translated into English for the first time) describes her decision to leave Japan:

For art like mine – art that does battle at the border of life and death, questioning what we are and what it means to live and die [Japan]was too small, too servile, too feudalistic, and too scornful of women. My art needed to a more unlimited freedom, and a wider world.

She launched her career in New York with a solo show she organized at the Tenth Street Cooperative Gallery in October 1959.

Kusama first publicly exhibited works in her teens; embarking upon an artistic career was extremely unusual for a young woman in conservative post-war Japan. In 1948 she enrolled to study the Japanese style of paintingNihonga, which she found ‘unbearable’; it was nationalist and the preferred style of the wartime dictatorship. She burnt much of this early work in the summer of 1956. Her painting of withered sunflowers‘Lingering Dream’of 1949, which escaped destruction, is representative of this style. Her early works of the 1950s that begin the exhibition are made with a variety of media – oil paint, ink, enamel, watercolour, and pastel; they explore natural forms and landscapes, demonstrating a dialogue with Symbolism and Surrealism.

These pictures are muted, depicting contorted forms derived from nature: the stems of dying flowers that attract green butterflies painted flat; knotted ropes and twisted vines . The barren landscape of Earth of Accumulation (1950) is overwhelmed by a thickly painted sky above a sloping horizon line; there is a suggestion of burning in the distance; this and other of these early works possess a subtly violent undercurrent.

The third room exhibits seven of Kusama’s large-scale ‘Infinity Net’ paintings; first exhibited in June 1959 in a group show at the Nova Gallery and in her first solo show, ‘Obsessional Monochrome’, in October 1959 at the Brata Gallery in New York. They were critically well received; she found her first success in America with these large-scale monochromatic works. They are made through delicately expressive gestures of paint; the results are impressively physical slab-like objects. Mignon Nixon, in her catalogue essay ‘Infinity Politics’, suggests they expose and upstage the excessive masculinity and machismo of Abstract Expressionism.

It appears that Kusama has applied white oil paint to blue-grey grounds; she has meticulously painted rings or circles of white to produce a net-like layer of paint through which the blue ground shows. The net is constructed through rhythmic brush strokes; however, what I’ve described as the two almost consistent layers or veils of paint easily merge to give an all-over effect. The net or mesh design is irregular, it sometimes breaks down because of a heavy application or build-up of paint.

The Minimalist artist and critic Donald Judd, who wrote favourably about her works, described their shallow space, ‘achieved by innumerable small arcs imposed on a black ground overlain with a wash of white’. Kusama herself described the ‘layers of dry white paint, which result from a single touch of the brush repeated tirelessly over time’; her intention was to represent the ‘infinity of space’ within  ‘an extraordinarily mundane visual field’. They are particularly convincing modernist paintings made obsessively, displaying the process of their making.

The fourth room or environment contains Kusama’s accumulations sculptures: one corner of the gallery is arranged with a sofa – Accumulation No. 2,made in 1962. It is a sculpture made from a sofa encrusted with accumulated sewn and stuffed phallic objects – three armchairs, a stool, cupboards and a suitcase. Men’s and women’s shoes are scattered on the floor, all coated in paint and encrusted with hundreds of hand-made phallic objects, organic vegetable like protuberances that erupt and grow from what were mundane things, which evoke, perhaps comically, male sexuality. Spray painted clothes decorated with artificial flowers and other found objects hang on the walls slightly above the furniture: accumulations of physical and psychical matter.

Writing in 1964, Edward Kelly described a ‘phallus barnacle easy chair with fringe’ – Accumulation No. 1, also of 1962; in his opinion it was a nervous and disquieting art that he labelled ‘psychotic’. By the time Kusama started to write her autobiography in the 1970s she had begun to understand and explain her work as intrinsically linked to hallucinatory episodes during her childhood and mental illness. Interpretations of her work have been linked to psychological disorder; since 1977 she has chosen to live within a psychiatric hospital in Tokyo and this context has framed speculation about her work.

Her installation Aggregation: One Thousand Boats Show, which followed, was first shown at the Gertrude Stein Gallery in New York in December 1963. A spot-lit rowing boat completely covered with stuffed and sewn phalluses occupies the gallery space; its image is repeated in white on black on a wallpaper-like design that covers the floor, ceiling and walls: a viewer would be left ‘seasick and hallucinating’ she comments. She later described her ‘complexes and fears’ regarding the phallus as the subject of her sculptural work. Her ‘first soft sculptures were shaped like penises’ because she:

had a fear of sex as something dirty. … I began makes penises in order to heal my feelings of disgust towards sex. Reproducing the objects, again and again, was my way of conquering the fear.

She exhibited the first of her soft sculptures or accumulations in a group show at the Green Gallery in New York in June 1962 alongside Claes Oldenburg, Andy Warhol, James Rosenquist, and George Segal, directly linking her to the ‘ground zero’ of Pop art.

Her Heaven and Earth of 1991, in which tentacle-like forms, made from sewn and painted stuffed fabric, emerge from rectangular boxes, echoes the imagery of the earlier accumulation works. Kusama’s paintings of the 1980s and 1990s are highly finished and slick, stylized works evoking biological forms, combining Surrealism with the look of Manga comics, painted in bright acrylic.

I’m Here, but Nothing(2000) is a darkened interior tastefully furnished; the room and its furnishings are covered in coloured dots lit by ultraviolet fluorescent lights so as to become uncanny. The final installation, made especially for the exhibition, is the Infinity Mirrored Room, Filled with the Brilliance of Life (2011). The queue to enter or participate in this world that Kusama has constructed suggests its popularity; the viewer becomes (briefly) disorientated within seemingly infinite reflections of their own mirrored image and the hanging LED coloured lights.

The motifs – the repeated polka-dot pattern intended to signify self-obliteration – themes, and evocations of her work remain relatively consistent and connected across the six decades and 14 environments of the retrospective; perhaps Kusama’s practice was most synthetic and achieved in the paintings, sculptures, and installations that are responsive to, and that develop, the avant-gardism she encountered in the early 1960s. The retrospective presents Kusama’s art as ‘a journey of personal discovery’; it juxtaposes ‘cool minimalism’ with ‘manga kitsch’ that results in a vivid and exhaustive account of her positions and influences, the evolution of her artistic career.

Have you seen this catalogue? What did you think? Was it enjoyable to read? Good value for money? Let us know!

Infinity Net – The Autobiography of Yayoi Kusama, translated by Ralph McCarthy, has been published by Tate Publishing to accompany the exhibition.