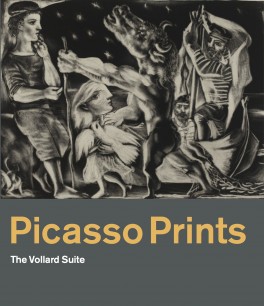 Picasso’s special qualities of immediacy and constant invention  were always more expressly revealed through his drawing than through his painting. The medium of etching, where the incisive point of the burin replaces the mark of the pencil, ideally captures these attributes.

He was at the height of his creative powers in the years between 1930 and ’37, when he produced a set of 100 prints, commissioned by his long-supporting dealer Ambroise Vollard, who was particularly enthusiastic about getting artists to produce limited print editions, usually as illustrations for classic texts. The Vollard Suite, as it has become known, has only recently been acquired by the British Museum in its entirety, through a donation from the collector, Hamish Parker, and it is currently on display there from 3 May to 26 August.

Although self-taught as a printmaker, Picasso produced over 2,500 prints over his lifetime, in various  techniques including lithography and linocutting, but seemed to be particularly attuned to etching. His approach was predictably experimental; he was attracted to the sugar aquatint process, which allowed painterly qualities of light and shade to be explored, enthusing, ‘you can even use your fingers’. This aspect appears in a number of the Vollard Suite prints.

As distinct from any direct sequence of action, as  would be found in a series of illustrations to a given text or even in a kind of graphic novel, the plates must be considered as variations on a number of themes. Although each is precisely dated, they are not generally shown in chronological order but grouped in thematic sequences: ‘Battle of Love’, ‘The Sculptor’s Studio’, ‘Rembrandt’, ‘The Minotaur’ and ‘The Blind Minotaur’.  In general terms, Picasso pays admiring homage to the themes and styles of delineation of the art of Classical Greece, transmitted through red and black figure vase painting and bas relief (low relief) carving of architectural friezes and sarcophagi.

Paradoxically, this had always been a central concern of the academic system of training against which the early avant-garde artists had revolted, but during the 1920s and ’30s, the taste for Neo-classicism had become widely diffused within modernism.  But Picasso’s readiness to take up these themes was dependent on the freedom he took to translate them in terms of his personal mythology.  The ancient myth of the Minotaur, half man, half bull, served as a personal motif, as the model of a melancholy but potentially bestial, tyrannical creator. Yet this creator was often entranced by the potency of erotic attraction, specifically represented by his current muse (surely a legitimate if clichéd term in this case), Marie Thérèse Walter.  This personal myth is further compounded by the long-established mythology around the complex of relations between the artist, the model and the work of art as an object of ideal beauty. This raises questions about the nature of reality and illusion – a concern which extends back to the ancient  story of Pygmalion, who prayed to Venus that his perfect sculpture might come to life.

The acknowledged master of the art of etching was Rembrandt, another painter who was drawn to the subject of artist and model, and it was almost inevitable that Picasso should engage with him through a caricatured representation of ’the old master’ in a number of plates in the suite.

The finely presented reproductions in the book that accompanies the British Museum show will provide pleasure to the browsing art lover and instruction and inspiration to the printmaking artist, guided by an informative and well-researched introduction by Stephen Coppel.