The weird and wonderful ways of William Blake 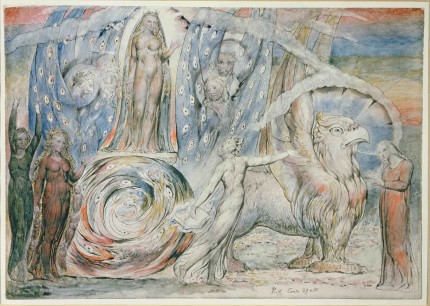 William Blake (1757–1827) is widely recognized as one of the most important figures in the history of British literature and visual art. His work is usually deemed to be part of the Romantic movement, although this is a retrospective label as the singularity of his work resists any definite classification. In his poetry and associated illustrations (sometimes referred to as the ‘prophecies’), Blake presented his ideas as an integrated mythology (essentially, a made-up world, termed ‘Blakeland’ hereby Colin Trodd), wherein concepts become characters with names and identities.

Blake’s prophecies expressed his personal philosophy, which championed the free imagination as the only access point to spiritual truth and begrudged its oppression by religion, materialism and commonplace law and order. This unique attitude to art, together with the fact that Blake worked in isolation, applying his own invented methods and techniques, meant that hepositioned himself outside the accepted norms of the contemporary art worldand was largely ignored in his lifetime. Even so, appreciation of Blake gathered pace in the 19th century, in various guises and forms. This is the subject of Visions of Blake: William Blake in the Art World 1830–1930, which sets out to provide an understanding of Blake’s reception and influence on the art world in the century after his death to ‘at last’ match our knowledge of his influence on literature.

Books on Blake are often – owing to the complexity and idiosyncrasy of their subject – dense and difficult. Visions of Blake certainly falls into this category, perhaps unavoidably so, as many of Blake’s enthusiasts, the real subjects of the book, adopted Blake’s obscure artistic manner. Trodd is not afraid to admit that as a reproduced artist and writer, Blake poses a problem, although there is no attempt to simplify or condense any of the 19th-century commentaries on his work. Instead, the book charts and analyses in immense detail (and in some cases, offers interesting off-beat interpretations of) key cultural figures’ responses to Blake. For this reason, Visions of Blake will primarily appeal to students or academics already interested, even immersed, in Blake. For those put off by Blake’s weird and wonderful ways, Visions of Blake will simply add fuel to the fire.

The book is divided into six chapters, broadly chronological, but also tangential and repetitive – sometimes necessarily so. The first three chapters look at the Victorian recovery of Blake, of which Alexander Gilchrist’s biography Life of Blake (1863) and the critical response it generated are the central focus. Chapter 2 considers Blake’s sense of visual order, and how he and successive writers and artists confronted his images – particularly the book illustrations – as actual objects. Chapters 4 and 5 reflect on visual artists and designers producing work in the Blakean tradition and consider possible points of contact – more than has been traditionally acknowledged – between Blake’s vision and Victorian art. The concluding chapters consider the application and appropriation of Blake in the formation of ‘modern’ art.

Throughout the text, several recurring themes and arguments emerge. One, acknowledged early on, is that nearly all Blake respondents and commentators direct and convert Blake to their own particular interests and agendas. In other words, it is made clear that models of Blake should always be understood in relation to the critical interests of the writer in question. The author certainly follows his own advice, as all source contexts are explained and analysed in detail. A further persisting argument suggests that there exists a continued longing for Blake’s work to be identified both as a personal vision but also within a currency of tradition, an interesting notion to reflect on today.

Another theme – perhaps the most intriguing – is that Trodd never presents Blake as a direct iconographic influence on later artists. Rather, it is the author’s belief that the relationship between Blake and certain British painters is more abstract, be it analogical – stemming from a shared attitude to the nature of the body as a vital component in the production of meaning (as in the work of George Frederic Watts) – or a cultural affinity, whereby the image is seen as an animate entity (as in the work of Ford Maddox Brown). This theme represents the main thrust of the book, which essentially focuses more on Blake’s assimilation into 19th-century philosophical debates about artistic value, identity and work and less on more traditional artistic matters – taking its cue from Blake himself, perhaps.

To the author’s credit, Visions of Blake does not differentiate between positive and negative responses to Blake, and many of Blake’s ‘enemies’ are featured. Curiously, there is scant attention given to Samuel Palmer, a well-acknowledged Blake supporter and artistic successor. The book also lacks a conclusion, although there are hints that a second volume may follow.

BUY Visions of Blake FROM AMAZON

For an introduction to Blake's life and work, try William Blake by Kathleen Raine in the Thames and Hudson 'World of Art' series.