Women Surrealists: a ritual journey to a Wonderland 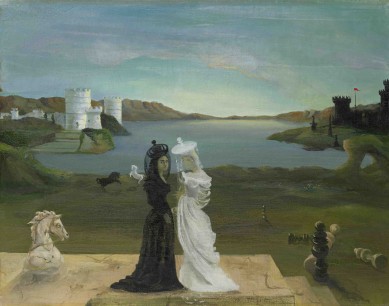 Galleries in the USA, Canada and Mexico are all showing the exciting work of women Surrealists – Robert Radford reviews the catalogue

If there is one route to art making that seems particularly receptive to the expressive needs of women artists, then Surrealism might well seem to signal that direction. This certainly would be the evidence from this book, which forms the catalogue to an important exhibition showing at three galleries in the Americas during this year.

Ilene Susan Fort suggests a number of reasons for this affinity; the artists selected frequently found in Surrealism the discovery of liberation and empowerment. It was a salvation from the constraints of patriarchal culture with its expectations of bourgeois family life, particularly in the case of the women from the USA.  She sees the self-portrait as a resource for exploring the inner life and the possibilities of alternative personas. This might certainly apply to Dorothea Tanning’s Birthday, 1942.  Is this marking a kind of rebirth, led on by some demon of the night, escaping the threats lurking behind the doors to dark rooms of the past?

Reasonably, the curators have adopted an open, inclusive application of the description ‘Surrealist’, admitting some whose work was at some stage in their career recognized as having surrealist qualities, alongside those, such as Jacqueline Lamba, Lee Miller, Leonora Carrington or Remedios Varo, who were more definitively identified with the movement.

Mexico had already been established as a privileged territory in the Surrealist cosmology by the 1930s, following visits by André Breton and Antonin Artaud, who detected a potent fusion of the elemental and the supernatural contributed by both the indigenous cultures and Spanish Catholicism.  Added to which was the attraction of its modern condition propelled by the attitudes of revolution and the particular role assigned to artists in furthering the revolutionary movement.

At the outbreak of the Second World War, Mexico then took on significant role in affording refuge to a number of Surrealist artists, including women such as Leonora Carrington, Kati Horna, Alice Rahon and Remedios Varo, who formed a working community with Mexican Surrealists such as Lola Alvarez Bravo,  Maria Izquierdo and Frida Kahlo.  It was from this complex dynamic that a distinctive new turn in the imagery of Surrealist painting and photography developed; one that focused through its central content on female experience and expression.

Tere Arcq properly points out, in addition to any personal agendas, the parallel campaigns pursued by the Mexican artists for socialist reforms and women’s rights. Gloria Feman Orenstein neatly links the descent of Alice down the Wonderland rabbit hole (referred to in the title of the exhibition) to the shamanic concept of rebirth via a ritual journey, and sees it as matching the discovery of a new land for those who had escaped the ordeals of conflict in Europe. She draws attention to the pulse of magic and the occult that typically flows through the work of Carrington, Varo, Juanita Guccione, Bridget Tichenor and others.

Photography proved an effective medium for women, usually as a joint practice, with documentary and propaganda work alongside more surreal expression in the work of Alvarez Bravo and Lee Miller. Kati Horna is gradually gaining wider recognition today for her work recording Anarchist campaigns in the Spanish Civil War as much as for her disturbing surreal inventions such as La Muneca (the Doll).

Evidently the work exhibited and discussed in the book will provide powerful material for a debate about the contributions made by this generation to the wider field  of the work of women artists and it is certainly instructive to trace linkages with the practice of more recent and current generations.  In addition to providing an informative and well-illustrated exposure of the work of 48 artists, who often remain little known or undervalued outside regional or national boundaries, In Wonderland  will prove an invaluable archive, hopefully prompting further investigation and research,

BUY In Wonderland FROM AMAZON

‘In Wonderland: The Surrealist Adventures of Women Artists in Mexico and the United States’ was shown at the Los Angeles County Museum of Art until 6 May 2012, and is at  Musée National de Beaux Arts, Québec (7 June–3 September), then Museo de Arte Moderno, Mexico City (27 September–13 January  2013).