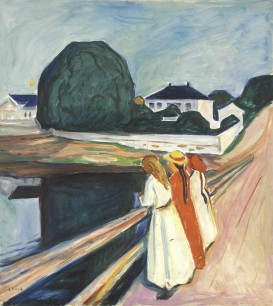 Are you a Munch fan? If you are, I expect it is his early work that attracts you – you think of him as  fin de siècle artist, immersed in the Symbolism of the age, not to mention a rather dark Nordic psychology, with his claim to ‘dissect souls’. Tate Modern is having none of this. The gallery’s current show, ‘Edvard Munch: The Modern Eye’, insists on the artist’s place in the 20th century.

Born in 1863, Munch did not die until 1944, so there is much to be said for the claim that he was as much an artist of the 20th-century as of the 19th. From the art-lover’s point of view, however, what counts is not when the art was produced but how good it was. For this reviewer, the later art, though interesting in its way, is much less effective than the earlier works.

Unfortunately, this is made very apparent in the second room of the show, where are displayed a number of paintings from the 1890s hard by later versions of the same images. In keeping with the artistic preferences of the new age, in which abstraction and Cubism were among the most powerful trends, Munch re-painted his Symbolist works as exercises in flatness, form and colour.

This could, of course, have produced exciting results – but sadly the forms and colours are not actually as effective as they were in the original paintings. Take the earlier painting The Girls on the Bridge, which as a work from 1902 does narrowly make it into the 20th century. This is a colourful yet atmospheric piece compared with which the 1927 version looks dowdy and stilted.

This later version is evidently regarded as something of a star turn by those responsible at Tate, as they have used it on the cover of the catalogue. I could not obtain a postcard of the earlier version and none of the earlier versions of the works shown is included among the images supplied for the press, so I cannot show you. One wonders whether the curators are supremely confident that the later versions are so much better that no one will be interested in their predecessors – or nervous that the earlier works might prove more popular.

The same is true of such works as The Kiss (1897) and its reworking as Kiss on the Shore by Moonlight (1914), Vampire (1893) and Vampire in the Forest (1916–18). They give the impression of a man trying to reinvent himself in line with prevailing fashion.

Picasso collaborated with Diaghilev and the Ballets Russes in creating stage sets and costumes in 1917, but Munch got into this rather earlier, working on a production of Ibsen’s Ghosts in 1906. Besides contributing to set design, he painted pictures of the actors at work. Simon Bolitho, who wrote the little booklet that accompanies the show, argues that this work informed his ‘Weeping Woman’ series of nudes. These works, which apparently return the artist to his earlier preoccupations with the psyche, seemed to me rather more effective than the more ‘documentary’ images found elsewhere in the exhibition – workers leaving a a factory, people fleeing a burning house, and so on.

An interesting section shows images that Munch painted while suffering from a serious eye complaint – a haemorrhage in his right eye. He painted what he saw with this left eye closed, producing images distorted by rings of colour. It is as if everything he saw had to be investigated and expressed on canvas, and there can be few, if any, similar images by other artists. One thinks of Monet’s efforts to paint when his cataracts were far advanced. This of course produced very different images but one presumes inspired by the same determination to record vision as experience.

Munch was certainly prolific – many of the works on show at Tate are from Oslo’s Munch Museum, whose 24,000 works are only two-thirds of the artist’s total output. It seems that many of these are photographs, and much is made in the show of how Munch’s painting came to be influenced by photography, with figures cut off at the edges of his pictures. Yet this was not new: Degas had been doing much the same thing decades before – think of the ‘snapshot’ effect of Place de la Concorde, 1875. (To throw the cat among the pigeons on this one, Vermeer is widely thought to have used the camera obscura in the creation of some of his images.)

So should you go to this show? If you are a Munch fan within striking distance of London then you will definitely not want to miss it – the scale of this exhibition and the inclusion of work from every decade of the artist’s career make it an interesting show. It has already been shown in Paris and Frankfurt, and London appears to be its last stop. Otherwise, you may be deterred by the £14 entrance fee – but of course free if you are a Tate Member and only £7 for Art Fund members, and definitely worth considering at that price.

‘Edvard Munch: The Modern Eye’ does not include any version of The Scream – though there is a Munch show currently in Edinburgh where you can see one (‘Edvard Munch: Anxiety of Life and Death’ – now isn’t that a Munch-ish theme? – Scottish National Gallery of Modern Art, Modern Two, until 23 September).