Royal River – the Thames in all its glory 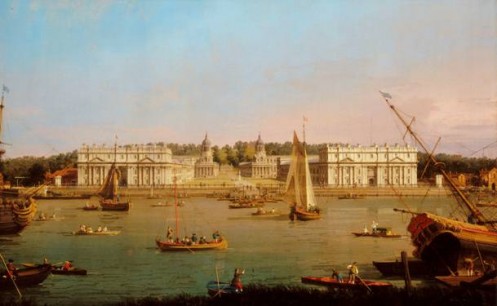 The magnificent exhibition, 'Royal River: Power, Pageantry and the Thames', at the National Maritime Museum at Greenwich, accompanied by an equally splendid catalogue, is the Museum’s contribution to the Queen’s Jubilee celebrations. Billed as an exploration of the history of the Thames as a stage for royal power, pageantry, celebration and symbolism, it also covers the major events and key individuals connected with the river over the past 500 years. A string of experts have contributed to this visual and cultural feast, the foremost being guest curator Dr David Starkey, the historian and broadcaster.

For centuries, the Thames served as London's principal street, and the place where the greatest number of people could see important events. There were coronation and marriage celebrations, civic pageants and funerals, launches of ships and openings of bridges. And there were informal festivities such as frost fairs, and sporting events such as boat races.

Centre stage is Canaletto’s The Thames on Lord Mayor’s Day, London: The Thames on Lord Mayor’s Day, looking towards the City & St Paul’s Cathedral (painted before 1752), which graces the cover of the publication. You may well find it a familiar image by the time you read this review, for it has been reproduced in numerous newspapers and magazines this year. It has often been shown alongside photographs from June’s Jubilee water pageant: a ‘before and after’ comparison across the centuries. And you can see a large-scale reproduction of it at London Bridge station; it was, we are told, an inspiration for Renzo Piano’s nearby Shard building.

Canaletto’s great painting doesn’t celebrate a royal event, but the annual pageant of the new mayor of the City of London. He would travel to Westminster to take his oath of office, and then return to the City, a colourful and noisy procession in which the Livery companies showed off their wealth for all they were worth. Canaletto had recently arrived from his native Venice, and London appears very Venetian indeed. The pageant was held in October, yet an Italianate sun smiles serenely and the large tree to the right of the picture is in full summer leaf. It’s a huge painting, on loan from the Lobkowicz Collections in the Czech Republic. It was purchased from the artist by Prince Ferdinand Philip Lobkowicz and sent to his castle in north Bohemia in 1752, along with another Canaletto view of the Thames at Westminster.

The contributors to the catalogue provide in-depth accounts of the rise of the river’s status, and also of its sad decline. It was principally the development of sprung coaches that led to the dwindling of river traffic, for roads became smoother to travel on, and passengers no longer had to wait for tides. Once roads became the main transport routes, there was no longer any particular advantage in living beside the river, so new dwellings faced the streets instead, abandoning a scene that was becoming increasingly malodorous and unhealthy.

By the mid-19th century the Thames was best avoided altogether, though it took the ‘Big Stink’ of 1858’s hot summer to drive the government into action to tackle the problem. Modern engineering came to the rescue with a network of sewers beneath the city and the construction of the Embankment above. The populace could now breathe again, but the river remained dirty. The continuing development of roads and then railways led to an increasingly empty river, while the streets and bridges surrounding it became ever more jammed with traffic. Only recently has the river revived as a thoroughfare and home for wildlife.

The exhibition, opened by the Queen, includes a significant number of loans from the Royal Collection and is truly spectacular, if rather a lot to take in at one go. It’s also rather a miscellany – a good thing or bad according to taste – for there are exhibits illustrating everything from Watermen’s races to the life of Vauxhall Gardens, Brunel’s Thames Tunnel to the ceremony of swan-upping.

The catalogue is a mine of information and lavishly illustrated, a really useful work of reference for anyone interested in London and the Thames. But it does suffer from the curse of the publication with multiple authors. Several contributors repeat accounts, or part of accounts, of the same historical event or period (Nelson’s funeral features twice, for example, as does George IV’s departure to visit Scotland).

All the current activity on, and relating to, the Thames, can only assist its future, not to mention the future of transport in London. Like many other people, I’ve been making increasing use of Thames river buses over the past few years, and many of the groups of visitors to the show are choosing to arrive by river. It spreads the word about the revitalization of the Thames and its potential as a revived thoroughfare for the future.