The playful surreality of Eric Ravilious 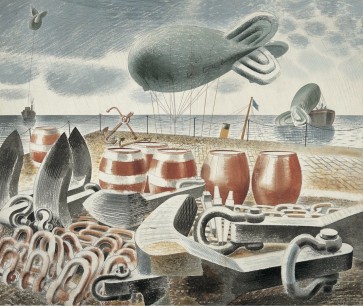 When I organized a touring exhibition of the work of Eric Ravilious (1903–42) in the 1980s, he was hardly known to the general public. But over the past two decades, many publications have appeared covering every aspect of his work, his correspondence and his place in the artistic circles of his time. In fact, Ravilious is now one of the most popular artists of the interwar period.

He made his name for his murals and wood-engravings as much as for his watercolours. Towards the end of his short life, however, he was specializing increasingly in watercolour, and experimenting with lithographic prints. It is his watercolours that are most highly valued today, with their very distinctive style and handling – taut, delicate designs with gentle, dry brushwork – together with a quirky and often whimsical attitude to subject matter. This style epitomizes for us now so much of the modernism of British art and design of the 1920s and 1930s. Yet Ravilious’s debt to England’s great watercolourists of the 18th century, such as Towne and Cotman, is very clear in both his choice of subject matter and compositional design.

Ravilious was at ease, and popular, in every type of social circle. He was also a central figure in a group of artists who learned a great deal from each other. They were, in general, a very cheerful set – no tortured geniuses or seekers after elemental truths, but chroniclers of what they saw around them. Their early styles have great similarities, indeed the early watercolours of Edward Bawden can even be mistaken for those of Ravilious. But Ravilious achieved more than most: the mundane subjects that caught his eye also gave him the opportunity to explore universal aspects of everyday human life, imparting a dignity and monumentality to ordinary scenes and objects, streets and activities.

Ravilious loved sport, particularly tennis. His design of two top-hatted cricketers graced the cover of Wisden’s Cricketers’ Almanack for decades; like many of his humorous images, it is not over-decorative, cosy or trite.

Indeed, below the surface of his apparently straightforward records of objects and places, there is often a haunting sense of an unseen presence lurking in the background, sometimes even a feeling of menace. He shows a greenhouse interior, with a hosepipe on the floor convulsed and writhing like a snake. An old bathing machine appears to be about to roll downhill. Chairs and metal bedsteads seem to have personalities of their own. This surreal quality is emphasized by a scarcity of human figures. And when human presences are included, they are usually semi-silhouettes, their faces blank.

In 1940 Ravilious became an Official War Artist, travelling all over Britain recording coastal defences, ships and aircraft, submarines and underground war offices. Some scenes appear quite playful: barrage balloons look like giant versions of party balloons, and aircraft on runways like toy models. He also conveyed the tension of much of the work he observed, and figures appear, often looming large in foregrounds and viewed from behind, anonymous but responsible.

Ravilious was as fascinated by the details of ships and planes, and he found the experience of flying a thrilling one. He was particularly enthusiastic about his posting to Iceland, but it was here that he was lost, when his plane failed to return from a reconnaissance flight.

This is the second edition of a book published in 2003 to accompany a centenary exhibition at the Imperial War Museum of the same title. Both the exhibition and the publication included many previously unpublished paintings, letters and other documents. The book is not a long one, and there are fewer than 40 pages of text, but the images are superb and it is the only up-to-date, all-round survey of the artist’s career as a whole, and is thus a good introduction to his work. The legacy of the exhibition continues in the Museum's online archive.

Ravilious’ growing popularity is perhaps one of the reasons for the relative neglectof the work of his wife, Tirzah Garwood. Now their daughter Anne Ullmann has compiled The Wood-engravings of Tirzah Ravilious (London: Fraser) in 1987, and this year has published her mother’s autobiography, Long Live Great Bradfield & Love to You All (Huddersfield: Fleece Press, 2012 – see Robert Radford’s review in this issue of Cassone), which both complements, and provides a wider context, for her husband’s work.

*SPECIAL OFFER FOR CASSONE READERS*
Get 35% off this title by ordering direct from IB Tauris. To take advantage of this, visit www.ibtauris.com  and enter the code CASSONE at checkout.
Offer expires 31 December 2012.
For more offers see our Art News pages.