'Something pleasant' from a master of Pop art 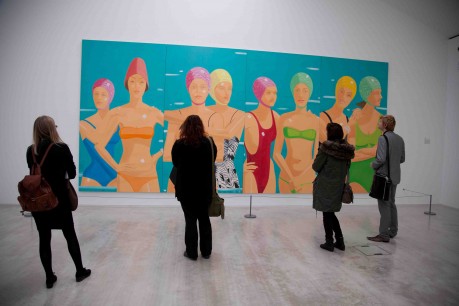 Jeff Fendall visits the Alex Katz exhibition, 'Give Me Tomorrow', at the Turner Contemporary in Margate, transferred from Tate St Ives, and talks to the artist.

However physically fit and mentally alert I might be, I don’t think that I, at the age of 85, would wish to be traipsing round the world, explaining to whomever might listen, my artwork and my place in the history of contemporary art. That would be a matter of personality. Myself, I would get a minion to do all that, whilst I remained relaxing at home, quietly confident of my place in the artistic stream of 20th-century art. Not so Alex Katz. His personality insists to him that he must be there, in person, modestly expounding his views on art, detailing his life experiences, providing the answers to many repeatedly asked questions.

Katz is very knowledgeable on the subject of art, not merely that of New York in the 1950s, where he was born and raised and learnt his craft alongside the rising stars of Jackson Pollock, Mark Rothko, Barnett Newman and the rest; nor just the Pop art of the 1960s, for which his clean-cut, hard-edged, brightly coloured figurative art was a forerunner. Katz is just as happy to discuss Watteau, or Rembrandt, or Stubbs,

I asked him whether the title of this exhibition ‘Give Me Tomorrow’, which he has used for previous works and exhibitions, had a special significance for him. ‘Martin Clark (director of Tate St Ives) wanted a light title for the show, and he suggested something, and I thought, well, it’s ambiguous and light, and actually it’s the title of a book of poetry that Carter Ratcliff wrote, so I just lifted it, and I told Carter, and I don’t think he was too upset.’

An interesting feature of this exhibition is that, apart from three rooms given over to Katz’s work, from the 1950s through to 2011, a fourth is of a selection of paintings which Tate Britain allowed him to select from their collection, to demonstrate the eclectic mixture that makes up his artistic taste. Here are more than 20 works from artists as disparate as Mondrian and Turner, Rousseau and Kline, with three George Stubbs, five by Walter Sickert, three by Sir William Nicholson, two by Chaim Soutine, and a Thomas Lawrence. Asked how he came to choose them, he replied: ‘Well, mostly I just thought they’d be fun to look at’.

Even now, Katz works on a daily basis. He spends nine months of the year in New York, but for three months in the Summer retreats to Lincolnville, Maine, where he first encountered the  ‘plein air’ painting which inspired him to follow art as a profession, as a student at the Skowhegan Summer School. He has since become a principal patron of the local Colby College. He spends some time preparing for each of his works, the surface, the brushes, the paint, the design, and then aims to complete each painting in a single day, and it is in Maine, alongside his wife and muse, Ada, that he finds the inspiration for his many beach scenes and seascapes.

Someone who knew I was coming to the exhibition to meet Alex Katz had remarked to me that his work has ‘the feel-good factor’. I wondered how he reacted to this view of his paintings. ‘The sentimentality of 19th century realism I never liked. I guess I’m a bit of an escapist. The 19th-century stuff­ – Victor Hugo – some of those sad stories, seem very sentimental to me, even Edward Hopper, who I like, has that.’

I mentioned to him his admiration for Chaim Soutine, two of whose works from the Tate, Katz has included in his selection. ‘Yeah, that painting there  [Landscape at Céret: 1921: Oil on canvas] is top Soutine, a fabulous painting. I think Soutine is very on the money right now – as fashion. He’s in the humanist tradition – he’s got a story, but I’m not interested in a story at all. I’m interested in the paint.’

One clue to the motivation behind his work came as a result of a question I asked him about the reception of his work by ordinary people: ‘I like to give the public something pleasant’ he stated. And he certainly does.

Artists mentioned by Alex Katz
A work by Chaim Soutine has recently been added to the collection of the Ben Uri, in London. See Cassone Art News, July 2012 and our review in September's issue

'Give Me Tomorrow' runs at Turner Contemporary, Margate until 13 January 2013.