Roll up, roll up – the circus in French art 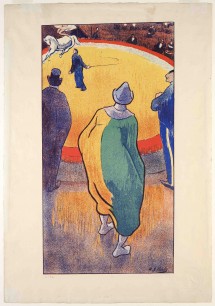 Picasso and the Circus, Fin-de-Siècle Paris and the Suite de Saltimbanques

The history of the modern circus began in the 18th century when the move away from court entertainment began. Through the 19th century the rise of the middle classes led to a greater demand for all forms of entertainment. The circus became one of the most popular public spectacles. From Paris to Barcelona every major European city had one permanent circus facility, if not more.

This catalogue of an exhibition of Picasso’s ‘Suite de Saltimbanques’ etchings and drypoints at the Trout Gallery, Dickinson College, Pennsylvania sets the prints within this history.

Paris’ first circus was established in 1783. By 1875 it had three permanent ones; the Cirque d’Été, Cirque d’Hiver and the Cirque Napoléon, drawing acts from near and far, Japan, Hungary, America and the Middle East. Documented by posters made to advertise their shows, the catalogue illustrates works from the Zimmerli Arty Museum’s collection of circus posters and prints at Rutgers University, New Jersey, and includes works by Jules Chéret, John Lewis Brown, Adolphe Léon Willette, Henri Gray and Henri-Gabriel Ibels.

By the mid-century the circus was seen as a significant aspect of modern Parisian life and artists interested in modern life came to depict both the circus and the theatre.  J. J. Grandville and Honoré Daumier, in their lithographs for the journal La Caricature, used them politically, casting Louis-Philippe’s government as a circus run by clowns. Degas, Renoir, Seurat and Toulouse-Lautrec are all known for their paintings of circus acts.

The 1881 Freedom of the Press Law removed restrictions on where posters could be placed, making them a more evident presence. Often physically quite large, with striking combinations of the classically elegant and ‘slapstick’, the standard was set by Jules Chéret’s colour lithographic work with its strong figural compositions and striking colours. French colour lithographic posters became appreciated as an art form in the 1880s and 1890s, a time when the circus also came to be considered serious entertainment on a par with theatre.

In contrast to the formal companies associated with the permanent circus, Saltimbanques were fairground or itinerant performers who performed their equestrian, acrobatic or feats of strength on outdoor stages. An integral part of circus history, they were nevertheless seen as outsiders, and as such were often depicted in art.

By the end of the 19th century, the circus often featured among the subjects of print portfolios, albums or publications such as André Marty’s L’Estampe Originale, a quarterly publication available through subscription consisting of ten original prints by both established and emerging artists.

Fernando Martin gives the background for Picasso’s interest in the circus as a subject. Living in Barcelona from 1895, he would visit the Tivoli Circus, where he had a relationship with an equestrienne, Rosita de Oro. He first visited Paris in 1900, but moved there permanently in 1904, residing in the Bateau-Lavoir at the top of Montmatre. It was a period of his life characterized by deprivation, insecurity and the life as a social outcast but also a time when he was exploring the art of an older generation of artists, mainly Post-Impressionists, Cézanne, Toulouse-Lautrec, Van Gogh, Seurat and Degas, many of whom, as has been said, depicted the circus.

According to his first mistress, Fernande Olivier, Picasso attended the Cirque Medrano, near the foot of Montmatre, as often as three or four times a week. The Medrano opened its doors in 1888, formally having been called the Cirque Fernando, as which it was depicted by Degas, Renoir and Toulouse Lautrec.

Picasso’s ‘Suite de Saltimbanques’ are among his very earliest works in print. Created in 1904–5, they display both a depressively anguished vision and confidence and optimism. Bridging his Blue and Rose periods, they were first exhibited at the Galerie Serrurier, in 1905, when they were printed in a small edition by Eugéne Delâtre.  In 1913 Ambrose Vollard bought the plates from Delâtre, and produced 250 sets of 15 prints.

The 15 prints comprising the series can be divided into different themes; two belonging to Picasso’s Blue Period, three portrait studies, seven that give the series its title and two of Salomé, which include both biblical narrative and aspects of circus life. Many of these subjects are variations on themes Picasso tackled in other media paintings at that time; drawings, painted sketches and painting, a feature he used creatively throughout his life.

The catalogue describes each print and compares them with works to which they relate within Picasso’s own oeuvre and those of other artists. It illustrates fully all the prints and many of the works referred to in the catalogue entries.

BUY Picasso and the Circus FROM AMAZON