Hopes and aspirations shine brightly in the Middle East 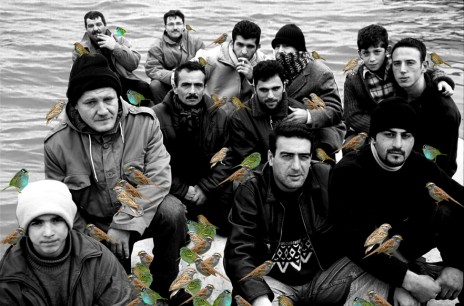 ‘Light from the Middle East’ is an extensive and eclectic collection of over 90 photographs taken by 30 different photographers in 13 countries; they challenge and fascinate.  Owing to the collaboration between the Victoria & Albert Museum and the British Museum and a generous donation from the Art Fund these two institutions have been able to purchase contemporary images by Middle Eastern photographers for their own collections.

Collating a series of photographs from a range of disciplines such as documentary, portraiture, image manipulation and more is quite a task, but it has been successfully accomplished by the exhibition’s curator Dr Marta Weiss.  A diverse choice of photographic material has been grouped into three sections: ‘Recording’, ‘Reframing’ and ‘Resisting’.

The first section of the exhibition, ‘Recording,’ examines how photography is a seemingly accurate way of recording people, places or events.  Photography can be used to observe or document a moment in time and, if successfully achieved, an image can reveal something that would not usually be seen or understood.  The Iranian photographer Mehraneh Atashi produced a series of images that record the hidden world of Iranian gymnasiums in an assignment called ‘House of Strength’.  The work is all the more remarkable because women are not allowed inside these gymnasiums and she has cleverly managed to include herself in the mirror of one of the images featured in the exhibition,Bodiless 1 (2004).  Despite appearing authoritative, photographs can confuse, trick or distort.  The exhibition team have acknowledged that images can be difficult to decipher or ambiguous in meaning and that our understanding can shift according to the context of viewing or even in the captioning alongside them.

In the second section of the exhibition the photographers appropriate or imitate images from the past or from other disciplines of photography, reframing them to make statements about the present.  Two engaging examples from Shadi Ghadirian and Tal Shochat illustrate the varied range of disciplines at work in this section.  Shadi Ghadirian is an Iranian photographer living and working in Tehran.  Her images capture the same hopes and aspirations of the sitters in studio portraits taken in the mid Qajar era of Iran and are similar to European Carte-de-visite photographs.  The subjects of these studio portraits sat proudly in the studios of 19th-century portrait photographers.  Ghadirian’s work stages recreations of these early studio portraits, updating them with contemporary props such as a can of Pepsi, a ghetto blaster or Ray Ban sunglasses.  In contrast, Tal Shochat’s work appropriates conventional studio portraiture to record fruit trees in Israel.  The results are strikingly perfect-looking images of trees that have been washed and cleaned; weighed down with fruit that has been meticulously polished.  Studio lighting and a huge black backdrop add to the surreal images of a natural form that has been reframed.

The last section of the exhibition is the most challenging and ultimately the most rewarding.  Resisting questions the notion that photography is truthful,  it touches on subjects of censorship, immigration and freedom via photographic techniques such as image manipulation and photomontage.  Some difficult issues are addressed but the fact that artists are still producing creative work under these circumstances is inspirational.  Sukran Moral, a Turkish photographer, highlights the plight of immigrant workers, illustrating freedom and liberty in an image entitled Despair (2003).  The photograph combines a reportage-style image of immigrant workers combined with digitally superimposed images of nightingales, a bird that he explains is ‘associated with hope and separation in Turkish literature’.

‘Light from the Middle East: New Photography’ is on show at the Victoria & Albert Museum, London and runs until 7 April 2013.  Admission is free.

‘Light from the Middle East: New Photography’ is on show at the Victoria & Albert Museum, London and runs until 7 April 2013.  Admission is free.