A year in the life of…Picasso 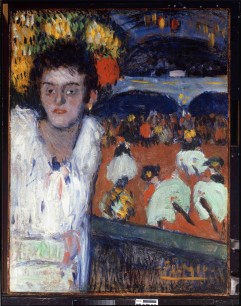 One year in Picasso’s life, at the turn of the 20th century, saw him make his first artistic breakthrough. It is that year, 1901, that the current exhibition puts under scrutiny. A small exhibition containing only 18 paintings, it tells the story in a clear and accessible manner.

As the year began the 19-year-old Picasso was in Madrid helping set up and launch the radical art and literary journal, Arte Joven. But by early May he had travelled to Paris, where he was to have an exhibition at the gallery of Ambrose Vollard, determined to make his mark on the European capital of art. With barely a month to go before the show’s opening, he had only a few small paintings brought with him from Spain, and the bulk of the 60-odd works in that show were still to be produced.

To meet the deadline he painted at a breathless gallop, drawing on the subjects, sights and characters of turn-of-the-century Paris, its famous dance halls with their glitter of electricity, their overly made-up dancers and prostitutes, the subjects of Baudelairerian modern life. He plundered and reinvented the works of Degas, Toulouse-Lautrec and Van Gogh, though strains of Goya and Velazquez also appeared: art he would have seen in Madrid’s Prado. Painting quickly and freely he used bright colours and lively brushwork, as in The Spanish Dancer, The Dwarf-Dancer or French Can Can, which caused the critic Gustave Coquiot to say in Le Journal of 17 June of that year

Pablo Ruiz Picasso…[who] paints round the clock, who never believes that the day is over, in a city that offers a different spectacle every minute. A passionate restless observer he exults, like a mad but subtle jeweller, in bringing out his most sumptuous yellows, magnificent greens and glowing rubies.

Opening in June and closing in July 1901, the Vollard exhibition was critically acclaimed. Picasso was a brilliant newcomer and roughly one-third of his paintings sold. But rather than capitalizing on the styles he had used for the show, he now became introspective, as his work shows. He started to seek new directions. He chose as subjects not just those from the edges of society but also people who seem alienated from themselves. After the vivid hues of his work for Vollard, his colours became muted.

Picasso showed a growing interest in themes of childhood and maternity, alongside subjects drawn from Parisian nightlife and the margins of society. Mother and Child, from the Kunsthaus, Bern, draws on Gauguin and Van Gogh. He eliminated extraneous detail, using painted outlines to define the figures, combined with flat expanses of colour. That painting, together with The Mother, from St Louis Art Museum and The Blue Room (The Tub), from the Phillips Collection, Washington DC, are transitional works showing his gradual move towards his Blue Period.

Now Picasso drew on an event that occurred earlier that year: his friend and companion, the dissolute Carlos Casagemas’ suicide because of unrequited love. Although not present at the event because he was in Madrid, Picasso had spent the New Year in Malaga with Casagemus  until he had somewhat tired of his friend’s depression and debauched approach to life and sent him back to Barcelona, from where Casagemas went on to Paris and the fateful act. Having abandoned his friend Picasso felt somewhat culpable for his death.

This suicide caught up with Picasso, in his art, only later in the year and, in his essay in the exhibition’s catalogue, Gavin Parkinson talks of the resulting paintings as ‘an attempt by him to drag an event or experience out of life and into the safer, ritualistic and rhythmic, more controllable haven of his artistic practice’. The three paintings Picasso made of his dead friend he kept private until 1965. Only one is in the show. By late summer they had led to the painting Evocation (The Burial of Casagemas), a Blue Period profane altarpiece.

The exhibition tells its story in vivid terms; the catalogue goes deeper and is more academic. Parkinson argues interestingly for Evocation (The Burial of Casagemas) to be understood as an early example of Picasso’s engagement with Nietzsche’s philosophy, especially The Birth of Tragedy. Marilyn McCully discusses Picasso’s early painting practice and his decision to overpaint some earlier compositions. She concludes that while there were economic considerations, this covering of early experiments was driven more by a desire to change direction in his art. C.F.B. Miller’s essay discusses changing ideas that surround the concept of authorship and genius in the modernist world and in the critical reception of Picasso’s work. Barnaby Wright’s introduction and catalogue notes trace each painting’s early history and its associations back to the times and fashions on which it draws.

Picasso reinvented his art at different points in his career but this exhibition shows him at the threshold defining his métier.

'Becoming Picasso Paris 1901'  is at the Courtauld Gallery until 26 May 2013. A fully illustrated catalogue is available, edited by Barnaby Wright.