Man Ray: capturing the fizz of his time 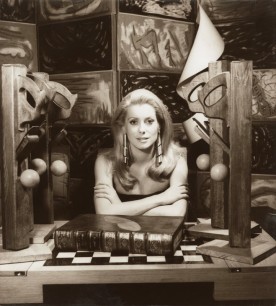 Crafted objects or documents of truth? Man Ray’s play with these concepts in his photographic portraits resulted in some of the most iconic images of the 20th century. Yet photography was not his first chosen medium. From the age of 18 he wanted to be a painter. A self-taught photographer, it was for him first a way to document his own, and then the collector John Quinn’s, art works. Then, when painting did not pay, it was a way for Man Ray to earn a living working for various fashion, picture and news magazines to stunning effect.

He was famously dismissive of the medium. In his opinion ‘99% credit should go to Mr. Zeiss and Mr. Eastman and 1% to the man who happens to stand behind the camera’. But by using props, the axe and alarm clock hung above Tristan Tzara’s head, the banjo beside Juan Gris, the poses he chose for his subjects and his signature use of light photography was not simply his violon d’Ingres (his hobby): he was able to convey the spirit of every one of his sitters.

Marina Warner, in her catalogue essay on the cultural significance of Man Ray’s photographic portraits, describes him softly moulding a face with light and producing a photographic sfumato, as in his portrait of Virginia Woolf that captured her poised inwardness and illuminated irises. Or by letting light rake across a subject’s features he brought out other qualities. She points to the way he captured Yves Tanguy’s puckishness, Arnold Schoenberg’s concentrated seriousness or the deep thought conveyed by James Joyce’s downcast eyes. Having recently undergone surgery Joyce was, in fact, just resting his eyes from the bright photographic lights.

In his catalogue essay, Terence Pepper, the National Portrait Gallery’s curator of photography, charts the dissemination of Man Ray’s photographs through Harper’s Bazaar, Vu, The Graphic and Life, American Vogue, then British and French Vogue (in-house called Brouge and Frogue) and the avant-garde journals from New York Dada to Minotaure. The exhibition includes examples. Yet it was these magazines’ associations with fashion, pictures and news and not art that contributed to Man Ray’s ambivalent relations to the medium. Ambivalent or not, he produced images that captured the fizz of a time when artistic and cultural ideas were clearly on the move.

Laid out chronologically, the exhibition traces Man Ray’s photographic portrait work from its beginnings in New York, in 1916, with early images of Marcel Duchamp, Joseph Stella and Mina Loy– wearing a darkroom thermometer as an earring. It follows his years in Paris with his muses, Kiki de Montparnasse (Alice Prin), Lee Miller (who learnt her own craft from him) and Ady Fidelin, until the Second World War brought about his move to Hollywood from 1940 to 1950. There he largely gave up photography to concentrate on painting but still continued photographing friends, such as Florence Homolka. He undertook the odd commission, a 1950 sitting with Ava Gardner being a stunning case in point.

It was in Hollywood he met and married Juliet Browner, in a double ceremony with Max Ernst and Dorothea Tanning, and with her returned to live in Paris in 1951, where he died in 1976.

By far the majority of images in this exhibition are wonderful vintage prints. Yet there are no clues at all as to what sort they may be. The catalogue has no catalogue notes, gallery labels tell us more about the sitters and only occasionally hint at Man Ray’s technical explorations, such as his early colour photography, first tried in 1933 with the cumbersome tri-colour carbo process, represented by his portrait of the actress, Genica Athanasiou.

The catalogue illustrates all the images in the exhibition, capturing the variations in colour and print quality of the vintage photographs themselves. It does not, however, reproduce them to size, nor indicate the sizes of the original image. A tiny, circular colour photograph of Juliette Greco, roughly one inch in diameter is, in the catalogue, reproduced with a diameter over seven inches. Admittedly, you can see it better than on the wall.  It is a regretful omission for a publication that records Man Ray’s first museum exhibition in this country to focus on his really wonderful photographic portraits.

The exhibition ‘Man Ray Portraits’ runs from 7 February to 27 May 2013 at the National Portrait Gallery, London.

Lee Miller, mentioned in this review, learnt the art of photography from Man Ray and worked with him. She was one of the most important photographers of the 20th century and is particularly known for her Second World War photographs. Cassone published an interview with her son, Antony Penrose, in July 2011. Tours of her home, Farley Farmhouse, are also available.