Marcel Duchamp as a touchstone for post-war art 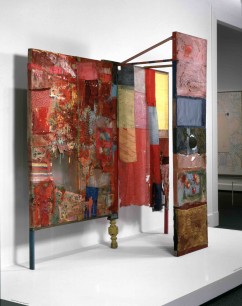 Dancing Around the Bride: Cage, Cunningham, Johns, Rauschenberg and Duchamp

Marcel Duchamp would probably have a wry smile of indifference on his face with the numerous readings of his life and work to be found here in relation to John Cage, Jasper Johns, Merce Cunningham and Robert Rauschenberg. Perhaps it is this attitude that separates him from those whose work has been influenced by him. He says of the ‘readymades’, works that represented his most radical interventions: ‘My idea was to choose an object that wouldn't attract me, either by its beauty or by its ugliness. To find a point of indifference in my looking at it, you see.’

In many ways it is the choreography of his thinking life and the playful, slightly self-deprecating approach that marks him out from even his Dada contemporaries. His followers seem still tied to the form of things to which they would then apply his liberatory, chance techniques and attitude.

This thoughtfully produced book, created to accompany the exhibition of the same name shown first at the Philadelphia Museum of Art and currently at the Barbican Art Gallery, London, explores the interwoven lives, art, and shared experimental spirit of Marcel Duchamp and four of America's most important post-war artists: composer John Cage, choreographer Merce Cunningham, and visual artists Jasper Johns and Robert Rauschenberg. The publication traces various themes and relationships among all five of these artists, with Duchamp as the touchstone.

The publication is an anthology of key texts from selected interviews, magazine articles, and book excerpts, by scholars, critics, and the artists themselves. Some of the texts have been re-published before but take on a new vibrancy in this project. Others are less well known and add to the richness. Together they narrate the younger generation's first connections to Duchamp and his work, which would redefine his legacy as well as the entire field of contemporary art.

A new text by Calvin Tomkins provides a helpful first-person account of his encounters with these artists at a key moment in the 1960s. The book also includes the first extensive and fascinating chronology that recounts the lives, art, and common projects of this influential group of artists.

The texts take many forms, from interviews and aphorisms to critical reviews  from the artists as well as from contemporary writers. The result is a range of critical reflections that provide an even greater resonance within the wider context of contemporary culture.

The book, almost a manual for the exhibition, is lovingly produced and well designed, and again the selection and quality of illustrations is so well considered that the book easily stands alone as an exhibition in its own right, in tune with Duchamp’s love of reproductions of his own work, as art.

A book to return to many times.

Dancing Around the Bride: Cage, Cunningham, Johns, Rauschenberg and Duchamp,  edited by Carlos Basualdo and Erica F. Battle, with an introduction by Carlos Basualdo and Erica F. Battle, an essay by Calvin Tomkins, text selection by Reinaldo Laddaga, and a chronology by Paul B. Franklin, Philadelphia Museum of Art, is published by Yale University Press, 2013. 448 pp., 100 colour and 105 mono illustrations. Hardback with slipcase, £40.00. ISBN 978-0-300-18925-4

BUY Dancing Round the Bride FROM AMAZON