Sargent: Exploring a land beyond portraiture 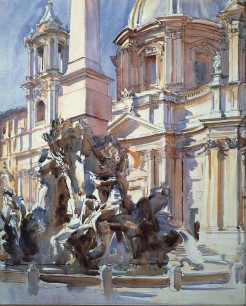 By Richard Ormond and Elaine Kilmurray

After the ‘diversion’ of the Venetian Figures and Landscapes (1898–1913), Volume VI) , volume VII follows directly on from volume V, which covered figures and landscapes painted between 1883 and 1899.   Still officially a portrait painter, Sargent was increasingly exploring landscape and genre scenes – using his rapid, assured style to capture what he saw.  In some ways reflecting the photography of the time, he captured corners and partial views rather than the topographical views recorded during the earlier 19th century.   The authors hail this as a sign of his modernity.

Parallel artistic events of the period include Cézanne’s repetition of Monte St Victoire, Fauvism, and Cubism. Although Sargent did not directly reflect these in his work, his cosmopolitan contacts meant he was aware of them. This is extensively discussed in the Introduction, which makes a challenging read.

Among the many countries Sargentvisited during these seven years, apparently in search of new subject matter, was Palestine, where he painted The Mountains of Moab, now in Tate Britain, considered his first pure landscape in oils. It was exhibited at the Royal Academy in 1906.  The watercolours are more interesting, and record scenes both eternal and now sadly long gone, as he followed in the feet of Holman Hunt and the French orientalists.

Italy and Spain provided parks and gardens with fountains and statues for his brush, and the Alps and Norway mountain scenery and gleaming fish.  There are considerable essays on the various Italian villas that Sargent visited and painted.  Contemporary photographs of many of the locations are included.  The Val d’Aosta (1907) provided the background for figure sketches of women and men resting – posed almost as if in a harem or in some fete galante. The Hermit is a large and curious work, perhaps illustrating the perception of his early 20th-century contemporaries that his work was sometimes ‘strange’.  Were they struggling with the detachment and objectivity of an artist as enigmatic as Watteau? Yet comparison with his friend, the Spanish artist, Jaoquín Sorolla, shows that his new subject matter was being explored elsewhere, so he was not out of touch with his own generation, just exploring a land beyond portraiture.

Sargent’s time as a teacher seems to have been less of a success, according to one of his pupils, Vanessa Bell, who described him as ‘not a natural teacher’.  Perhaps his own facility made it difficult for him to understand others’ struggles.  His ‘coldness’ and ‘objectivity’ in this period puzzled The Morning Post, which reviewed his landscape and figure studies in exhibitions at the New English Art Club, The Royal Society for Painters in Watercolours and the Carfax Gallery.  The works were often not for sale.  As art increasingly became more complex and less representational in the hands of the avant-garde, Sargent should have appeared more approachable; but as he moves away from his perceived throne as portrait painter his critics bite harder.

The section dealing with a group of drawings and watercolour sketches of Benvenuto Cellini’s Perseus (1545–54) is lengthy (seven  pages) but important because the subject is connected with a section of the Boston Murals,  and was also a particular  interest of Sargent’s.  An ‘unusual’ oil of Perseus (c. 1906)  by night (shades of Whistler’s firework displays)  is now in Santa Barbara (first bought by one of his sitters and art patrons,  Mrs Charles Hunter). It has a snapshot feel but is painted with the power of a consummate handler of oils.  The challenge of Sargent!

There is a small appendix of works previously unrecorded in volumes I and IV. It is the nature of this catalogue that such additions can be included.  The pastel study of Paul Helleu stretched out in a field of c.1889  (The British Museum) reminds us of Sargent’s connections with contemporary French art.  There is also an essay on the acquisition by the Brooklyn Museum in 1909 of 83 watercolours, which were later de-accessioned.  This is oddly enough repeated on consecutive pages rather as if each entry could be downloaded as an entity.

So the next part of this series will be Volume VIII.  This is truly an amazing task of research and devotion,  and so we must applaud it for the thoroughness of the authors, who seem to find something new to say about each object.  But what of the owners who have not ‘owned up’?  The very nature of such an undertaking is rather like sending all your Christmas cards and then realizing you have forgotten someone who has just sent you one…

For a review of the exhibition 'Americans in Florence: Sargent and the American Impressionists' held in Florence in summer 2012, see Cassone, June 2012