A world's fair of art – the Venice Biennale 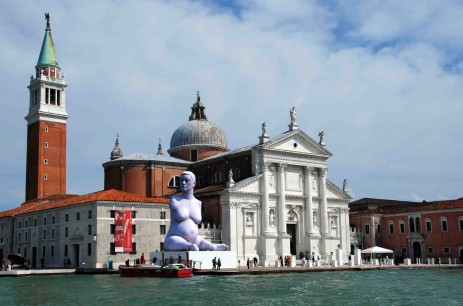 In the first part of a two-part report, Basia Sliwinska and Michal Fornalczyk reflect on this year's Venice Biennale

The vernissage or preview starting at the end of May led up to the public opening of the 55th Venice Biennale. As always, the show that aims to be the centre of global art is intimidating. One experiences the extreme picturesqueness of the city, the sophisticated discussions about contemporary art overheard when travelling by vaporetto from one venue to another, the celebrities spotted when attending parties at private balconies overlooking the Canale Grande, and the narcotizing smell of flowering jasmine. It almost makes one sick and slowly anaesthetizes one to the enforced glamour, luxury and exclusivity. The formula seems fairly exhausted. The Biennale is swinging between the poles of anticipation and anticlimax. It is an orgy of affluence and the power of the art market.

There were moments when I thought I was attending a UN meeting, not an actual art exhibition.  It felt more like the red carpet at the Oscars, with the best of the most marketable/saleable/promoted art. It is one of those events that makes one think of art and politics, and art and ethics. Once, the Venice Biennale was one of just a few similar shows where one could inform oneself about the latest art emerging in different parts of the world. It was modelled after the world's fairs and since 1895 it has aimed to manifest the cultural diversity of the international art world.

Each participating country is represented by a national pavilion, functioning almost like an embassy, manifesting the most recent developments in its art.  This presence of national pavilions makes Venice Biennale unique. They are organized in a way that highlights the transnational historic alliances between states and their colonial empires (and their power). The pavilions of countries that started participating in the Venice Biennale relatively late are located outside the main Giardini.

Now, the biennale model has been exploited so often, the question arises as to what it offers. Does it paint a picture of global cultural excellence? Is it still a battleground of cultural hegemony? Does it contest issues of capital and access? Does it address global political power play? Venice certainly still occupies the privileged position of power among similar events, because of its scale and scope.

This year, 88 countries are represented in national pavilions, including ten new participants: Angola,Bahamas, Kingdom of Bahrain, Ivory Coast, Republic of Kosovo, Kuwait, Maldives, Paraguay, Tuvalu and theHoly See. There are more women artists and curators but still too few. And the art of what some call ‘peripheries’, ‘edges’ or ‘other worlds’, is still eclipsed by the dominant narratives.

The main exhibition, entitled Il Palazzo Enciclopedico(The Encyclopedic Palace), snakes through the Giardini and the Arsenale, displaying works of more than 150 artists from 37 countries. The title refers to a model of a utopian dream by Marino Auritiwho, in 1955, imagined a museum in the form of a 136-story building resembling Babel tower. It was envisaged as housing ‘all worldly knowledge’ in Washington D.C.This dream of universal knowledge is recreated in Venice by the Biennale’s curator Massimiliano Gioni, who designed a labyrinth of artworks, well known and less established, mixing the contemporary and the historic, that are fascinating, yet almost difficult to digest. The aim was to present how the present (and possibly the future) is informed by a historical perspective, how the past ties with and leads to the present, and how dense the relationship between the artwork and the viewer has become. The Encyclopedic Palace aims to display obsessions and the power of the imagination. It shows the delirious state of contemporary art with multiple horizons and global aspirations. In a way, it also sketches a framework for the abundance of versatile aspirations of artists represented in their national pavilions.

The overabundance of everything makes the Biennale a 12-course meal you cannot finish. To add to this, 27 collateral events are scattered across the city promoting different organizations and institutions. It is impossible to see everything. The number of venues and the queues to some pavilions are overwhelming (particularly those of France and Germany, which switched sites this year to challenge the imperialist area in the Giardini marked by their and Great Britain’s pavilions; does it mean the ‘alternative’ map of the world is changing?). There is not enough time to visit it all, not to mention the time needed to think carefully about what one has just seen and to read into the new global and political manifestation of power and geopolitical alliances.

Artworks at the 55th Biennale present versatile narratives, some of them responding directly to aspects of the Biennale and its history. Others address the nature, value and methods of circulation of images and objects. Issues of the environment, ecology, identity and politics are also tackled. There are some celebrity-style show stoppers, including Tara Subkoff's artwork Future/Perfect, for which the actress Milla Jovovich appeared in a plexiglas box, or Marc Quinn’s inflated Alison Lapper Pregnant on the island of San Giorgio Maggiore, signposting Quinn’s exhibition. There are some obvious ‘likes’, such as Ai Wei Wei’s account of his imprisonment in China in 2011 or Jeremy Deller’s British pavilion addressing wealth and magic with murals of Roman Abramovich's yacht and a bird of prey snatching a Range Rover. There are also some pieces that, in a way, irritate the audience. For example, Sarah Sze representing USA created an ecosystem composed of thousands of pieces including gum and string, which is simply too complex to engage with.

In the next issue of Cassone I will report further on specific pieces.

This article was written by Basia Sliwinska in collaboration with Michal Fornalczyk.