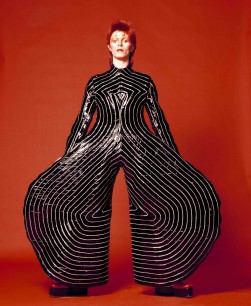 F0r many people the V&A is the museum of costume and the exhibition ‘David Bowie is’ had many of Bowie’s suits and theatrical costumes. Oriole Cullen, the V&A’s curator of fashion and textiles, quotes the Financial Times (2011): ‘fashion has had a four-decade love affair with Bowie that is only getting stronger. Indeed, Bowie may be the most referenced musician in fashion history’. She discusses the fashion designers who worked with Bowie in the 1970s: Freddie Burretti and Kansai Yamamoto, and his wearing of Mr Fish’s ‘man’s dresses’, as on the original cover of The Man Who Sold the World. She also looks at how Bowie influenced fashion designers and magazine fashion stylists.

The clothes were not all easy to see in the show itself – in some cases low lighting or distance from the viewer made close observation impossible. That is to some extent rectified here – some outfits get several shots, from whole-item to close-up details. There is nothing in the text about the actual construction of the garments, however intriguing – one thinks of the apparently gravity-resistant ‘balloon’ jumpsuit. This is not, however, unusual in V&A books – even their Twentieth-century Fashion in Detail (1991/2009) was rather short on the actual detail of construction. What is not visible is not explained.

Camille Paglia considers how Bowie projected his image(s) by taking tips from Hollywood, art cinema and fashion magazines. She writes of ‘Bowie’s genius for using a camera as others use a paintbrush or chisel – not from behind the camera but before it’. Paglia, of course, is mostly concerned with gender issues in Bowie’s oeuvre – both the visual elements and the lyrics: ‘never before had a major male artist so completely submerged himself in a female objet de culte’.

Christopher Breward effectively conveys the impact and use of LP covers (so much larger than CDs): ‘Their vivid visual appeal and haptic immediacy offered a tangible connection between performer and listener…[they] opened up decorative possibilities that turned teenage bedrooms into holy shrines.’ On Bowie’s ‘I’m gay’ interview with the Melody Maker’s Michael Watts in January 1972, Breward says that Roland Barthes (1915–80), the literary theorist and philosopher, ‘might have picked up on the subtext of artifice and performance that everyone else seemed to overlook at the time’. Yet ‘artifice and performance’ were always the very stuff of Bowie’s album covers. They are all depicted here, both the familiar versions and rarities such as a 1971 German cover for The Man Who Sold the World.

A chapter on music is perhaps the most unusual subject for a V&A catalogue. Bowie has, of course, long been criticized by his detractors for borrowing everyone else’s ideas. Howard Goodall’s defence of this is perhaps surprising – it seems that nearly all the composers we actually remember from the past did exactly the same. The real innovators are largely forgotten. Bad news for Frank Zappa fans, then.

Other essays here cover Bowie’s own design skills (Victoria Broackes), the ‘psychogeography’ of London in the 1960s (Geoffrey Marsh), and Bowie’s relationship with youth subcultures, both as follower in the 1960s and leader in the 1970s (Jon Savage). Concluding the volume, educationist and historian, Sir Christopher Frayling, film critic Mark Kermode, and writer Philip Hoare discuss Bowie’s career and influence at a round-table discussion chaired by the V&A’s Geoffrey Marsh, director of theatre and performance collections.

The many illustrations include set designs, hand-scribbled song lyrics, storyboards for videos, album covers, and models and actresses ‘channelling’ Bowie. There are many stage and television shots. As in the show itself, one cannot but wonder at the sheer amount of stuff its owner has amassed, and kept even in the years when he was apparently wandering the globe with no fixed abode. It must have been parked somewhere or he would have needed such a lot of suitcases…

This catalogue is an object almost before it is a book. The design, by Jonathan Barnbrook, who was also responsible for the cover of Bowie’s album The Next Day (2013), loudly echoes that for the show itself. Barnbrook collaborated with the exhibition designers 59 Productions and Real Studios, designing the typography throughout. All the irritating signage there is unfortunately echoed here in pages devoted to single lines from songs or what someone thinks are aperçus. They occupy almost 10% of the 320 pages – it just feels like more.

The Situationist  Guy Debord argued that the ‘spectacle’ of modern life absorbs everything into itself. What was once shocking simply becomes part of the spectacle. The Sex Pistols' album cover of the Queen was up in the NG last year. What shocked our parents now gets a blockbuster show at a respectable museum, and a handsome hardback book to commemorate it. It is a volume likely to interest not only Bowie fans but also anyone interested in post-war popular culture in all its forms.

BUY David Bowie Is FROM AMAZON