Living the life in ancient Pompeii 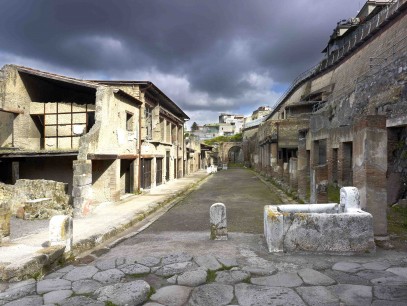 The latest visual spectacular from the British Museum is aimed at the widest possible audience – and doesn’t fail to impress. It brings together over 450 objects, many of them never seen before outside Italy, and includes some recent discoveries.

In AD 79, both Pompeii and Herculaneum were completely buried in just 24 hours, after the fateful eruption of Mount Vesuvius. The different conditions and after-effects of the eruption, pertaining to the particular locations of Pompeii and Herculaneum, affected the way that materials were preserved. Herculaneum being closer, the searing heat of the pyroclastic flow incinerated bodies but preserved organic material, such as wooden furniture and even foodstuffs, and buildings largely remained standing [image A], while in Pompeii, bodies were preserved but furniture wasn’t and many buildings were destroyed [image B]. By combining evidence from the two cities, including items thrown away in the drains, this exhibition aims to provide a unique insight into Roman life as it was lived by ordinary people. And we find that it is much fuller, livelier and funnier than might be thought.

The focus of the exhibition is a Roman home and the people who lived there – the familia – within its urban setting. In Ancient Rome, the familia or family included slaves and freedmen, as well as extended kin. Thus it included people from various levels of society.

It was encapsulated by the domus – the home, which often included shops and workshops on the ground floor, fronting the street. The exhibition has recreated the experience of moving from a busy street, complete with associated sound-effects, through the space between home and outside world – the falces or vestibule running between two shops – into the public/private space of the atrium, where guests were received, and beyond into increasingly private spaces – the tablinum, garden, dining-room, bedrooms and kitchen.

All these spaces are beautifully laid out, clearly labelled and explained, and contain well-displayed items that would have been used by the people who occupied such spaces, many of which are startlingly familiar. Thus there is the linen-chest for clothes, the portable heater (a charcoal-fuelled bronze brazier), the equivalent of a ‘hostess-trolley’ – a fancy heater for keeping food warm – and, my favourite, a lovely colander with holes in a multi-petalled design surrounded by cable patterning, whose maker was clearly proud of it since he’d punched in his name into it.

This colander is an example of how thoughtfully well displayed the items are: it was inverted and lit from within, so that the patterning could be easily appreciated. Another nice touch was the way an item similar to one illustrated in a wall-painting or mosaic was displayed next to it: thus a lovely glass rhyton (or horn-shaped drinking vessel) was placed next to a fresco showing a man drinking from such a vessel – he holds the vessel above him and wine pours from a hole in the tip into his open mouth [see image C]. Without the illustration one might be perplexed about how the vessel was used. Another fresco from the villa Stabiae shows a young girl seated on a wooden chair and holding a mirror while she styles her hair – just as any modern girl might. Nearby a similar chair and mirror are displayed.

The preservation of wooden furniture was peculiar to Herculaneum and provides some unique artefacts. Especially poignant is the wooden cradle [see image D], found in a modest flat in the basement of a fine house, its tiny occupant covered with a woollen blanket; it cannot fail to resonate with viewers today, almost two millennia later. Interestingly it seems there were no specific spaces for children within the house – but they are not invisible: near the base of a fine fresco in the dining-room of the House of Cryptoporticus there are drawings scratched into the walls of animals and horseman.

Other issues are also raised by the exhibition, such as the increasing visibility of freedmen and of women, and evidence for literacy. Then, as now, electoral notices covered street walls, and there is the interesting fact that over 50 examples of graffiti quote Virgil. In the wonderful fresco of the baker Terentius Neo and his wife he holds a scroll, symbolic of knowledge and power, while she holds a three-leaf wooden writing tablet [image E]. They are shown as partners: as business partners in the bakery at the front of their home; and also in marriage – directly above them is a painting of Cupid and Psyche.

As a woman, Eumachia could not vote or stand for public office, but she did commission and pay for the largest building on the forum, where a fine marble statue of her as Public Priestess was erected in her honour. The debt to Greek art is evident in its graceful stance, elegantly modelled face and complex arrangement of folding drapery. Wealthy Romans liked to display their cultural credentials by collecting and commissioning works in the Greek style, as evidenced by the five superb bronze statues known as ‘the dancers’ from the Villa of the Papyri in Herculaneum, one of which is displayed here [image F]. Dressed as a Greek woman in chiton and peplos, she is fastening her robe on her shoulder with a broach and stares directly at us as though we had interrupted her dressing. Her stone and ivory eyes transfix us, while her serious expression and severe hairstyle, and her calm pose, are more than a little intimidating. This severe style of 300 to 400 years earlier, was in fact made only 70 years before the city’s destruction.

Humour is also evident and demonstrates the Roman love of fun: thus the mosaic of a guard dog at the entrance to the atrium in the House of Orpheus [image G] and the floor mosaic from a dining-room showing a skeleton holding two wine jugs with the inscription ‘Make merry while you can’. Best of all is the series of four frescoes from a tavern showing how a night out for two friends ends up with them being thrown out for brawling.

There are so many wonderful items here and so much information that can be gleaned from them that I can only urge you to go along and see for yourself. I can also heartily recommend the catalogue, which contains far more items than are in the exhibition itself – all exquisitely reproduced (which is all too often not the case with exhibition catalogues) with excellent and informative accompanying text. The audio-visual guide is also well worth having – I don’t normally bother with them myself but found this one extremely helpful and informative, with additional talks by experts and great graphics to explain and help you identify particular parts of selected items on display.

The exhibition has certainly fulfilled its aim of recreating a snapshot of an ancient society, with which we can readily identify. My one criticism is that the other side of everyday life – death – has been largely ignored. I don’t mean the ultimate death suffered by the poor unfortunates caught in this catastrophe, but death as part of the cycle of life – the tombstones, memorials and epitaphs that could provide further invaluable information about this ancient society. The cemeteries were also part of these cities and deserved mention, at least in the catalogue.

For those of a ghoulish disposition, there are plaster casts of some of the victims from Pompeii, including the strangely moving cast of a dog in its death throws [image H]