The sorrow and beauty of Arab women 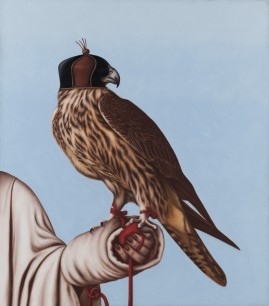 In Jerusalem, Sarah Lawson discovers the fascinating art of Fatma Abu Rumi at the L.A. Mayer Museum for Islamic Art

It is not often that the description of an artist’s media includes zircons and hair, but Fatma Abu Rumi (b.1977 ) has incorporated her mother’s hair into some of her work, and halos of zircons or a border of zircons and tiny beads feature in other pictures.

Fatma Abu Rumi’s one-woman exhibition, ‘Between Sorrow and Beauty’, at the L. A. Mayer Museum for Islamic Art in Jerusalem opened in the summer of 2012 and is to run until the end of August 2013. This exhibition has introduced me to the work of an artist who challenges gender stereotypes by exploring themes and implications of hair, jewels, and the Muslim veil.

One of Abu Rumi’s most striking works is a circlet of vicious-looking thorns wrapped with layer upon layer of hair, making literally a crown of thorns, which also evokes the aqal, the jointed black headband that anchors the Arab male’s head covering. In that one image, My Mother’s Braid, there are references to intense suffering and symbols of both sexes. That is a neat summation of the main concerns in the rest of Fatma Abu Rumi’s work.

She portrays the veil or scarf that Muslim women are often expected to wear variously as simply a piece of cloth, as a reference to Joseph’s Coat of Many Colours, and, in a series of self-portraits, as an oppressive garment. This series shows the artist both as a modern woman in Western dress and as an ‘exotic’ Arab woman in traditional dress. She is shown wearing a veil in one picture and, in another, with a tight white covering over the head and lower face, less like the loose drapery of the conventional veil than the binding of a mummy, ‘leaving only large eyes gazing at the viewer and attempting to testify and tell what the muzzled mouth cannot disclose’ (gallery notes).

The notes on the wall explain, ‘Though many of the portraits are self portraits, Abu Rumi is not talking about herself but about Arab women as a class whose oppression and social immobility she protests against as she decries the conventions that prevent women from speaking or acting without the permission of their guardian, lord, husband, or family elder. The veil (hijab), decorated and ornamented with sparkling zircons, functions as a symbol of the barriers placed on women by society, a covering that keeps women out of sight and palpably displays the contrast and mutual presence of beauty and pain’.

The glittering zircons and tiny beads create a trompe l’oeil effect. The intricate lacy rendering of a diaphanous veil with sparkling gems either in a band along the top of it or sometimes scattered through the pattern make it hard to tell at a glance whether it is part of the portrait or a real veil draped across the painting.

The artist’s father is depicted behind a sheer veil, suggesting a barrier between the sexes and at the same time blurring the distinction between them. Another work, The Man Bride, further plays with gender roles by depicting a man’s silhouette covered by a white bridal veil. A companion piece shows a shadowy woman wearing a bridal veil, but black.

In one intriguing and enigmatic picture, My Father and Me, part of the ‘Teddy Bear’ series, the artist is shown in a black hijab looking at us over her father’s shoulder. He stands facing her, barefoot on an oriental carpet and wearing a long brown robe; at one side on the floor is a discarded teddy bear, a symbol of the end of childhood. The father’s bearded face is turned in profile and a halo of zircons floats above his head. Is he protecting his daughter from harm or is he suppressing her individuality and aspirations? Is he a protective figure or a threatening one?

The work chosen to represent the exhibition on the big poster outside the museum is another game with gender stereotypes. A tame falcon perches on the padding on a woman’s arm; we see her very feminine hand with its vivid red nails. This bird of prey is a masculine image because only privileged men hunt with them in the Arab countries. As it is perched on a woman’s hand, its hood and jesses take on new suggestions of restricted manhood. Is the woman with her bright red nails challenging male domination, replacing it, or exposing it as a sham? The use of contradictory elements, like the trompe l’oeil effects, causes you to do a double-take. (Any art that makes you do a double-take must have something going for it.)

If you are lucky enough to see this exhibition before it closes, you will also have the chance to watch two short films showing continuously in darkened side rooms. In Recovery Ms Abu Rumi, dressed in a plain black dress, walks among some trees with a white dress over her arm. She immerses the dress in a plastic tub and proceeds to knead it in the water, but as she works, the clear water becomes a dye bath and the dress turns dark grey. Expressionless, the artist carefully hangs it up over a tree branch and walks away.

The second film, Exit, again features the artist, now indoors and wearing a sheer veil thrown back over her head. She faces the viewer with a blank expression and then turns in profile so that we see only the right side of her face. She seems to be applying something to the unseen side and then finally turns to the viewer again. The left side of her face bears an intricate design of lines and stuck-on jewels. Now she pulls the veil down over the right side of her face, and a similar but not identical pattern is on the veil so that there seems to be one overall design, but half is on the skin and half is on the veil. Still expressionless, she emerges from a doorway onto a sunny street, then turns a corner and walks down a shadowed passageway to another bright area. Accompanying both films is a plaintive wailing woman’s voice backed by a drum and stringed instruments. Both films have an enigmatic, open-ended quality that allows the viewer to invent interpretations of the scenes, silent except for the melancholy music.

The accompanying catalogue is in Hebrew, Arabic, and English and contains, besides biographical information about the artist, an article by Dr Yael Guilat, ‘Fatma Abu Rumi: Persisting and Resisting’, which adds an interpretative overview of the works on display.

Fatma Abu Rumi is an artist who deserves a wider audience. Since graduating from the Art Institute of the Oranim Academic College for Education in 2005 she has won awards for her work and has had group and one-woman exhibitions. Her skill is evident and her imaginative world is a realm of the unexpected.

The catalogue for this exhibition is available from the L.A. Mayer Museum for Islamic Art, Jerusalem, Israel. Contact [email protected]
For information about visiting the exhibition, see the museum’s website