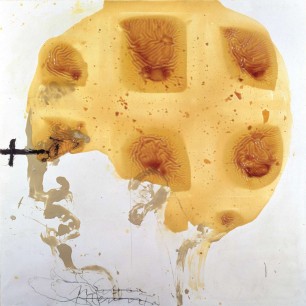 Antoni Tàpies (1923–2012) is widely regarded as the greatest visual artist to have emerged in Europe since the end of the Second World War. He is a difficult artist in the classic early modern sense of this term, but he achieved considerable commercial success and artworld esteem, on the basis of which he was able to set up in 1984 his own foundation in his home town of Barcelona, which houses nearly two thousand of his works.

Now the Fundacio has organized the publication in English of Tàpies’ complete writings. His autobiography was first published in Catalan in 1977. We learn of his family’s involvement in Catalonia’s cultural and political resurgence; his own early TB, which disrupted his schooling and led to intense self-education; his dropping out of law studies to become a self-taught painter; the importance of being in Paris over 1950–1; and current Parisian ideas about what the critic Michel Tapié called ‘another art’.

Tàpies struggled to work through Surrealism and Informalism over nearly a decade. His first Martha Jackson gallery exhibition in New York (1953) and his introduction to American abstract expressionism were important in his development. Communism was important to him in the early 1950s and from the same period his interest grew in the spirituality of other (especially Oriental) cultures. He read omnivorously and listened to Wagner, Brahms, and Bruckner. He supported the growing anti-Franco movement. Indeed, he wrote the autobiography in 1966 after being arrested and fined for attending a clandestine meeting to discuss creating a democratic university.

Tàpies discusses his work at points. He explains the appearance of his textured surfaces around 1954 in various ways, from a reaction to ‘easy tachisme’ in favour of the concrete to the association with worn wall surfaces and a feeling for basic earthen materials. He lists the imagery in his work, insisting on its revaluation as something ‘holy’ rather than lowly. He talks about the open suggestiveness of his imagery and the search for profound expression, very much the emergent theme of the second volume of writings, his collected essays.This second volume is essentially the texts of six books of occasional writings published between 1970 and 1999, ‘reactions to ideas, attitudes, and trends we have encountered in recent years’.

Only the last book, Art and Its Places, seems to have been written from the start as a single argument. Most of his first book, The Practice of Art (1970) dates from the cultural fallout of 1968 and thereafter Tàpies felt impelled at regular intervals to engage with his artistic culture and the politics of art, especially with the attacks on painting issuing from Conceptualism and related ‘new media’ discourses. Tàpies always saw himself as an engaged intellectual whose work ‘must be intimately tied to the progressive ideology of his time’ (1955).

As a Marxist, Tàpies frequently criticized soi-disant Marxist attacks on art and especially painting, often by quoting Marx and Engels against these critics. Their attacks on the art-market are seen as not invalidating the making of paintings or even the mechanisms of the market itself. He attacked the apparently progressive ‘dematerialization of art’ vaunted by Lucy Lippard, especially for its ‘absence of dialectics’ in that ‘dematerialized’ artworks are always in the end material objects sold on the art market. It is here that we see the role of Marxism in producing a much more sophisticated analysis than was available among US critics. Tàpies championed painting as creating quasi-sacral objects of power involving us in the deepest experiences of life, especially that sense of oneness with the rest of the world. Thus is Tàpies’ materialism and evolutionary Marxism squared with an atheistic spirituality seen as reconciling ancient wisdoms and the progressive betterment of human experience.

Much as I am thoroughly sympathetic to Tàpies’ defence of the importance of medium for encapsulating a depth of expression, there is one side of his work which seems to me problematic in this regard, namely, his use of ready-made elements. To take an extreme example, Metal Shutter and Violin (1956) can easily be paraphrased to mean the silencing (nugatory cross, closed shutters) of art (violin) during the Franco period, and as such its pathos is rather easy and ‘Victorian’.

Unfortunately, when Tàpies tries to explain a specific work, Straw and Wood, 1969, he chooses a work of readymade elements only, where his suggestions of meaning soon begin to seem merely a matter of his own assertions. Signs and objects, unless transformed within a medium, must be presumed to read like a sentence (Art is Mute under Francoism) or else they are open to claims about signification, in either case not determinately expressive in any deep suggestive way. Elsewhere, Tàpies uses a range of intellectually teasing signifiers including (as Twombly and Walker have done) words themselves. Tàpies calls ‘Polysemia’, which come close to the sort of postmodern jargon that he ended by attacking. Tàpies’ late modern weakness then lies in his courting of some aspects of postmodernism.

Happily Tàpies’ commitment to painting and drawing as deeply expressive media trumps these weaker aspects of his work, as is demonstrated by the power of the 48 large-format paintings with body imagery selected for the 2012 exhibition ‘Antoni Tàpies: Image, Body Pathos’, in Germany. The innovation of this catalogue is to restrict commentary to essays by 12 writers commissioned to focus on just one painting each. Not that the strategy was that successful, as many writers fell back on familiar views, often with scant focus on the work at hand.

From this viewpoint, the best essays were those by Melitta Kliege and Laurence Rassel. Kliege discusses the imagery of Head and Varnish (1990) in terms of an unfixed relationship of motif, materials, symbols and writing, elements distinguished in terms of materials/method. The motif is a painted profile head, to which the shape of puddled and puckered varnish only partially relates. Some sort of painted symbol attaches to the eye, which to Kliege ambiguously suggests a cross, addition sign or counting line. The written erased words at the bottom read as Catalan for knowledge and memory, placed beside clapping hands (suggesting the ageing artist reflecting on his own successful art career?).

Kliege ends with the postmodernist assertion that the viewer then makes his/her own meaning from the suggestions found, an assertion underpinned by Tàpies’ statements along those lines. This is seriously problematic as total indeterminacy of effect does not square with the idea of expression at all. Clearly the artist was unable to theorize his way through that knotty issue.

Kliege’s analysis could be said to finish where interpretation might start. For example, the puckered varnish suggests brain cells or separate areas, the material support for thinking. The ‘cross’ points into the eye, threatening the painter’s key organ. Does truthfulness in visual art involve a combination of pain and pleasure? How are materialism and spirituality fused really? Does art or knowledge produce wisdom or bliss, or are these beyond art’s achieving? It seems to me that, an ageing Tàpies could be said to have achieved a certain determinate expressiveness (however deliberately open, fluid, multilayered or even conflicted the effects) around the theme of consciousness about being alive and seeking truth about our human condition.

The Fundacio Antoni Tàpies in Barcelona provides a permanent public exhibition of selections of his work on a rotational basis and supports the exhibiting and appreciation of modern and contemporary art. See the Fundacio's website.

26 photographs fully documenting the works exhibited in the exhibition at the Museum fur Gegenwartskunst Siegen, ''Antoni Tàpies: Image, Body, Pathos', Nov.2011–Feb.2012, and how they were displayed are available on the museum's website.


Tàpies on art:
‘The artist must make the spectators understand how narrow was their world and must open new perspectives for them…Where the art form is unable to bring about disturbance in the spectator’s spirit and does not force them to change their way of thinking, it is not the art of the moment.’ (1955)