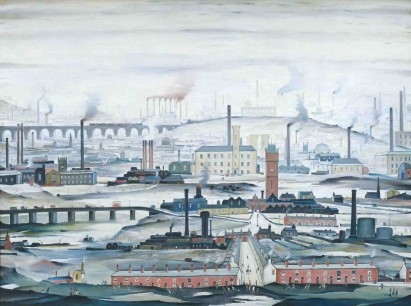 Karen Hasin-Bromley looks at the artist behind the myths in ‘Lowry and the Painting of Modern Life’ at Tate Britain, London

The curators T.J. Clark and Anne M. Wagner commented that this exhibition was  to provide those who admired  Lowry’s paintings with what they wished to see, and those who did not admire or know his work with an opportunity to  become admirers.

This exhibition is the first on Lowry to be held by a public institution in London since the artist’s death in 1976. It is also the first to recognize Lowry’s connections with French art.

Lowry was not an amateur painter.  As early as 1905 he attended classes in drawing and painting at the Municipal College of Art in Manchester.  In the notes to the exhibition we are told that it was in 1912, after seeing Stanley Houghton’s play Hindle Wakes, a story about the working class set in a town in Lancashire, that he began to use the industrial urban landscape and the working-class people who lived there, in his sketches and paintings.  In 1915 he was taking part-time classes in life drawing at the Salford School of Art, and in 1918 he was accepted into the life class at the Manchester Academy of Arts.  The French painter Adolphe Valette was one of his teachers at the Municipal College and Bernard Taylor taught him at Salford. He was well aware of the changes that French Impressionism had made to the depictions of modernity, and attended exhibitions at the Manchester City Art Gallery, keeping abreast of current trends in art.

A lot has been made of his life style: a rent collector who was a virgin and lived with his mother is not the image of a successful artist.  But his pictures and especially their similar subject matter and ever repeating pallet, was just that – his own life of repetitive working days, in the same types of place, dealing with the same types of individual, who always appear on a limited number of streets, occupied in a limited number of pursuits, amidst the same urban landscapes.

At Tate Britain, over 90 works are presented in themed rooms. The first room, ‘Looking at Lowry’ provides an overall view of his works, paintings that  span his career  from 1913–71. Included in this section is a painting that stands out as atypical of his work, Flowers in a Window (1956).  This picture is just a detail of a window in the front of a terraced row of houses, through which you can see  a vase of flowers.  Next, in ‘The idea of modern life’, some of his works are seen alongside works of French artists, drawing comparisons between their works and his. This includes Adolphe Valette’s work, York Street Leading to Charles Street (1913)and George Seurat’s The Zone (Outside the City Walls) (1882–3).

This room is followed by ‘Street life incident and accident’.  Excavating in Manchester (1932) stands out here amongst the scenes of leisure as it shows men at work.  The pencil drawings The Strike Meeting (1921) and The Auction (1936) are exceptional for their portraiture. Also in this room is The Mission Room (1937).  A little-known unnamed painting that depicts a crowded town square in Salford was found on the back of this picture. It is thought to be an earlier version of two works featured in the exhibition: Our Town (1941) and A Town Square (1928). A Town Square was exhibited in Paris and reproduced in a biographical French dictionary of contemporary artists in 1931. Its inclusion in this publication indicates Lowry’s  status in France at this time; he was exhibiting more often in Paris than in London.

Ruined landscapes follows.  In this section The Lake (1937), especially, provides an apocalyptic view of the world: even the boats are sinking.  Lowry painted this picture after his father's death in 1932; he was left caring for his bed-bound mother until her death in 1939. A number of his paintings from this period project a sense of isolation and despair.

The Cripples(1949) is displayed in the room that follows, which focuses on the theme of ‘Social life of Labour Britain’. There was serious discussion amongst the curators about whether or not this painting should be included in the exhibition.  It is good that it’s there.

The exhibition concludes with a number of late, large industrial landscapes. Most notable here is Bargoed (1965).  A Welsh town in the Rhymney Valley, this is geographically a long way from Salford and Lancashire.

In addition there are 14 lithographs that are a sample of the Tate’s ‘School Prints’ where artists were commissioned to create inexpensive prints which could be sold to schools who subscribed to the scheme. L. S. Lowry, Henry Moore, Pablo Picasso, John Nash and Henri Matisse are displayed together at the entrance to the exhibition.

What is especially striking about Lowry’s works is his adept composition and use of perspective.  Within the overall restrictive subject matter and limited colour scheme of his paintings, these technical skills add an extra dimension.

This is an exhibition well worth making an effort to view and I imagine would convince those not previously interested in Lowry to become fans.

BUY T.J. Clark's The Painting of Modern Life FROM AMAZON

A catalogue is available from the Tate shop and from Amazon

Those wishing to know more about the Impressionist art that inspired Lowry may like to read The Painting of Modern Life: Paris in the Art of Manet and His Followers by T. J. Clark, one of the curators of the current exhibition – a fairly complex but interesting text for the serious student.