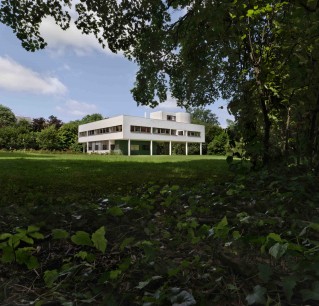 Significantly, this large and impressive Le Corbusier exhibition takes place in MoMA’s capacious Tisch Exhibition Gallery on the sixth floor rather than the Art Architecture and Design Department on the third floor. Le Corbusier (b. Charles-Edouard Jeanneret. 1887–1965) is presented not just as a pioneering modernist architect, designer and city planner, but also as an artist, writer and photographer – a sort of uomo universale (ironically) the all-round Renaissance man. Around 320 objects range from a small Ruskinesque watercolour of a Jura landscape (1902) to a 17-foot collage of photograph and mixed-media drawing of the elevation of the Hospital, Venice (1967). There are wooden models including the 1932 model for the (unrealized) Palace of the Soviets, Moscow 1931–2, four recreated interiors, furniture, and Purist and post-Purist oil paintings. There are loans from the Fondation Le Corbusier, Paris and the Avery Library, New York, adding to the richness of the MoMA’s own collections.

The guest curator, Jean-Louis Cohen and MoMA’s chief curator of architecture, Barry Bergdoll propose that Le Corbusier varied his designs in a site-specific manner and that landscape was a leitmotiv of his work, an engine to make the ‘machine for living’ (as he once described housing). This proposition is supported by Le Corbusier’s exploration of the Jura landscape around his hometown of La Chaux-de-Fonds and his sketchbooks documenting journeys to Italy, Greece, Turkey and Germany and his move to Paris. There is also the sumptuous siting of the Ronchamp Chapel on the wooded hillside or even the framing of the Unité d’Habitation, Marseille (1946–52) against the hills of Provence. And there are the views from the windows of his buildings, where a window frame becomes the picture-frame of a painting of a Mediterranean scene. This is seen in the Cabanon hut or the rectangular window onto the garden in the Pavilion for the Church Villa (1927–9). Nonetheless, there is a big difference between these and the far subtler insertion of buildings into a landscape by, say, Frank Lloyd Wright.

Also, the landscape preoccupation of the curators can become eccentric. Le Corbusier’s Purist paintings of 1918–23 are primarily post-Cubist still-lives with bowls, glasses, violins, guitars and a lantern: there is only one landscape painting of this period, Le Port de La Rochelle (February 1920): yet, the panel texts and press release insist that Le Corbusier was ‘arranging on the canvas objects of daily life as if they were forming landscapes’. Admittedly some of the 1928–35 post-Purist paintings, influenced by Léger – Lunch by the Lighthouse or Composition with the Moon –directly refer to landscape, but there is a sense of strain here. If everything is landscape, nothing is landscape.

Le Corbusier’s favourite building was the Parthenon, and he tended to want to place a startlingly white cube at the top of any prominent site. His and his cousin Pierre Jeanneret’s Villa Savoye (1928–31_ in Poissy, near Paris, includes his key elements which he would repeat in some form or other regardless of location: piloti columns, free façade and floor plan, ribbon windows, and a rooftop garden to compensate for the building’s footprint on the earth – an idea also popular in Bauhaus architecture. Indeed, some of Le Corbusier’s city planning had scant respect for terroir, such as the notorious Voisin Plan for Paris, 1925 or his plans for Algiers, although his sensitive work on Chandigarh in India – admittedly a new city – argues against those who would emphasize his megalomaniac tendencies, not to mention his flirtations with the wartime Vichy regime.

The presentation could be better. Confusingly the entrance comes counter-intuitively after the exit. The automatic doors of both create distracting ambient sound. Films on high-level screens in some galleries create blockages as those wanting to read captions have to peer behind and around those watching the films. The chromogenic colour prints commissioned from the British photographer, Richard Pare, of several Le Corbusier buildings, including the Ronchamp chapel and the Convent of Sainte Marie de la Tourette, Eveux-sur-Arbresle, are hung extremely high. The overall impression is that the exhibition needs a bit more editing and a better layout. It has lost impact in the desire to be comprehensive.

It is perhaps in the book, An Atlas of Modern Landscape, that the thesis of the curators appears in a much more robust form. Divided into eight geographic zones, the atlas pinpoints where Le Corbusier visited, had projects, built works, lived, worked or, for the Americas, lectured. Within the broad sweep of Switzerland and Germany, Italy and the Orient, Europe (West to East), France, Paris, Africa, The Americas and Asia, there is coverage of smaller entities – Capri, Pisa, Piacé or Zlin. Le Corbusier’s pattern of observation, notation, photography (including the later change to collecting postcards, such as a 1929 one of the Palermo area of Buenos Aires) is much more evident in the book, which also does much more justice to Richard Pare’s photographs. These almost justify the price of the book in themselves.

Best among the 30 contributors are Daniele Pauly, Genevieve Hendricks, Maristella Casciato, Barry Bergdoll (on ‘Le Corbusier and the Nineteenth-Century City’), and Jean-Louis Cohen, who really animate Le Corbusier’s absorption of and by the city of Paris. Pauly concentrates on the Purist works painted and drawn at Le Corbusier’s Rue Jacob apartment.  ‘La Cheminée’ (The Fireplace), the white cube (accompanied by two books atop the mantelpiece) is interpreted as the ‘sovereign cube facing the sea’ to use Le Corbusier’s language from his Journey to the East, even the Parthenon: perhaps there is more in the curators’ thesis than meets the eye.