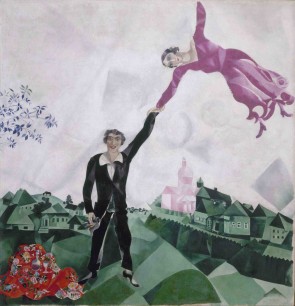 In Liverpool Alexander Adams is charmed by a winning display of the magical, poetic works of a distinctly Jewish artist, Marc Chagall

In recent years Tate Liverpool has hosted a number of impressive exhibitions by major artists, including Klimt, Magritte and Picasso, which have increased the city’s international prominence in the international art world. The latest is an exhibition of Marc Chagall (1887–1985), touring from its first venue in Kunsthaus, Zurich.

Viewing over 70 loans from Russia, Switzerland, Paris and America, visitors are likely to be impressed by the high standard of landmark pictures such as I and The Village (1911), Homage to Apollinaire (1911–12) and Paris Through the Window (1913). The exhibition places emphasis on Chagall’s early years in Paris (1911–14) (the most exciting period of change in his outlook) and the 1914–22 Russian period.

As a young artist, Chagall was deeply involved with folk art and Jewish themes linked to his home town in what is now Belarus. Upon arriving in Paris in 1911, Chagall visited a salon display of Cubism and had soon formed bonds with leading poets as well as members of the Orphist movement Robert and Sonia Delaunay. His tones lightened, colours brightened and geometric faceting gave his shtetl scenes liveliness.

Chagall was visiting Russia when war broke out in August 1914. Cut off from Paris, he resumed painting magical scenes of everyday life, this time with motifs close at hand. Some of the drawings were of wartime encounters: soldiers departing and the wounded being transported. The treatments are less Cubist than his previous work and closer to observed reality. The townscapes, in particular, have a satisfying solidity which contrasts well with their odd, uncanny qualities. These will surprise viewers who know only the peasant scenes.

Although the selection is limited to 1910–20 (with a few late works) there is enough to show Chagall’s range as a painter, illustrator and draughtsman. There are indications of the different tendencies in his output: a Symbolist picture of Lovers in Blue (1914), reminiscent of the work of Odilon Redon (1840–1916) and an intimiste interior of 1916 which looks like a Vuillard, Bonnard or Matisse. Fired with zeal by the Russian Revolution, Chagall took up a teaching position in Vitebsk, which he maintained until the Suprematist faction, led by Kazimir Milevich, effectively ousted him. Some 1918–21 collages flirt with Suprematism. Suprematism, however, demands complete submission to a language of absolute abstract forms and Chagall’s pieces, with figurative elements jumbled among geometric forms, feel like dabbling: not exactly insincere but confused and half-baked.

The murals from the Yiddish Theatre, Moscow (1920) form an impressive display in a specially designed gallery. The large painting, almost three metres high by eight metres wide, is relatively successful, combining scattered figures and various scenes against a decorative abstract background. A simple frieze of dishes of a Jewish wedding meal and tightly focused portraits of single figures dominating smaller rectangular canvases are effective and suited to their setting. One of the aims of the display is to put the case for Chagall as a distinctly Jewish artist, a stance that the selected works and catalogue texts fully vindicate.

Happily, the exhibition only includes a few late paintings. In later years, Chagall’s lines thickened and his colour became strident (usually against a dark blue background). As the best pictures in Liverpool attest, Chagall’s art was at its best when fresh, delicate and carefully judged. We have been spared the turgid acrobats of his late period.

Strange as it may seem to say, for pictures so bright and colourful, Chagall’s oil paintings are not easy to reproduce well. They have a wide range of dynamic colours, which are hard to replicate. Chagall’s touch is very diverse, ranging as it does from delicate dry-brush effects to heavy impasto, sometimes within the same picture. The substantial sizes of some paintings mean that in reproduction small details can be so reduced that they become illegible. Paris Through the Window (1913) contains a visible passage of underdrawing, where Chagall leaves bare an area where he drew in charcoal over an area of brownish undercoat, yet you would hardly be aware of that from illustrations.

It is perhaps inevitable that the catalogue designers and printers of the current show would struggle with Chagall. The reproductions are consistently biased towards green and slightly dark. This turnsThe Yellow Room (1911) into a green room, completely distorting how viewers understand the painting by presenting a misleading impression of the original art. The vivid scarlet of the blanket in The Promenade (1917–18) is a murky brown in the catalogue. More significantly, Homage to Apollinaire (1911–12) appears to be painted in ordinary paint when actually it has large areas of metallic silver and gold paints, colours that are admittedly difficult to reproduce. Perhaps the unusual materials should have been mentioned in the picture data. (Tate had similar colour problems with its 2008 Francis Bacon catalogue.) This is another reason for seeing this impressive exhibition in person rather than relying on reproductions.

‘Chagall: Modern Master’ is at Tate Liverpool until 6 October 2013