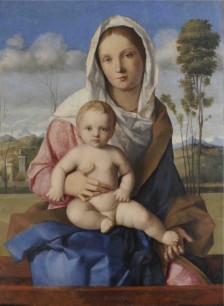 Hidden from view for 50 years and once again in obscurity. But did Bellini really paint the Dudley Madonna? If so when, and how do we know?

The numerous copies that have been made of this painting over the centuries show that it has been considered a seminal work. If it is indeed by Bellini it is amongst the most copied of his Madonna and Child paintings. Mazzotta takes us on a detailed journey through the painting's critical history and provenance, compares the numerous copies and discusses the conclusions reached by earlier commentators.

No documents survive concerning how the painting came from Italy to England but it is probable that John William Ward, who in 1827 became the 1st Earl of Dudley, bought it on one of his journeys to the Continent. It is known that he was in Venice in 1815 and again in 1817 and it is likely that during these visits he became familiar with Giovanni Bellini's work in the city. Ward, described as an educated and cultured man, began to develop his own art collection, which he kept in the house that he had had built on Park Lane in London, known later as Dudley House.

Handicapped by overpainting, the result of overzealous 'restorers', it has been difficult for critics to interact with the original aspects of the so-called Dudley Madonna, which led in many cases to its being classed as 'School of Bellini' or 'Bellini Workshop'.  Modern conservation treatment was carried out around 1955 and then in 2012 a very light campaign of (reversible) retouching was undertaken. Modern photographic techniques such as infra-red and x-ray have provided detailed knowledge of the condition and preservation of the work. The high quality and stylistic approach of the painting so revealed have elevated it to the standard of a genuine Bellini.

If we accept it as a genuine Bellini the next question is, when did he paint it? Earlier commentators have seen in the work features that suggest it belongs to Bellini’s late period. In 1937 Carlo Gamba thought the painting had 'clear lines to Raphael', citing the posture of the Madonna, who turns slightly towards the picture plane. In 1959 Pallucchini wrote that 'one might say that Bellini was under Raphael's spell – a majestic rhythm and at the same time a distilled classical subtlety even in the expression of feelings'. But how might Bellini have known of these aspects of Raphael’s work?

Mazzotta points out that in 1508 Fra Bartolomeo, who according to art commentator Vasari was much admired and frequently visited by Raphael, was in Venice with a wealth of new ideas to share and discuss with Venetian colleagues.  The so-called 'modern manner' of painting was beginning to break through. It included such features as challenging body postures, the fusion of the depiction of nature into the art work, the incorporation of 'Florentine spirals' created by the figures and the corresponding spirals of drapery, but free from the restrictions of geometry, expansion in volumes and grandiosity of gesture.

In the early 19th century, Francesco Aglietti made the claim that Bellini in 'the most glorious moment in the splendour of Venetian painting made his decision to become a follower and imitator of the disciples and to emulate with new passion their success’. Who are the disciples he is referring to? Bellini's two most illustrious pupils were Giorgione and Titian. In 1508 frescos were painted on the exterior walls of the Fondaco dei Tedeschi in Venice, initially by Giorgione and then by Titian, thus establishing the 'modern manner' in Venice. That Bellini, then over 75 years of age, should begin to incorporate their developments into his work can be seen as an example of his continuing receptivity and responsiveness to new ideas. To quote Aglietti again, ‘Bellini was in old age as green as the most beautiful flower of youth’. Comparing the Dudley Madonna with other works executed by Bellini around 1510, Mazzotta settles for this period as a probable date of composition.

This is a beautifully presented softback book, filled with colour illustrations and detailed references. The back cover folds out to reveal a full colour illustration of the Dudley Madonna so the reader can constantly refer to the work while following the author's lines of inquiry. This is a wonderful example of art historical investigative studies and a delight for Bellini students and lovers. Mazzotta reasons with logic and detailed detective work, presenting a compelling case for his argument, inspiring the reader to stick with him on this absorbing journey of discovery.