Picasso's progress from The Blue Room to Guernica 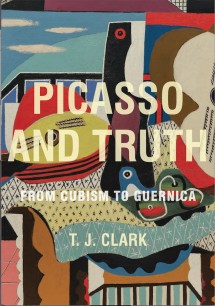 Picasso and Truth, from Cubism to Guernica by T. J. Clark

If it helps to know who a painting is of so be it, but T. J. Clark’s approach, unlike much of the existing literature on Picasso, is not biographical, but formalist. Clark argues that if Picasso had been content simply to paint his lovers, wives, and children, not exploring anything beyond that ‘strange fiction of European painting since the Renaissance called the “picture plane”’ why did he devote decades of effort to work that takes painting beyond lifelikeness and appearance of reality? It is his endeavour, in Clark’s view, his ‘reaching out and making mine – that gives Picasso’s art its gravitas’, its truth.

The present publication is drawn from Clark’s six Mellon Lectures, given at the National Gallery of Art, Washington DC in 2009. His argument centres on Picasso’s use of space and he leads his audience though the possessable objects of Cubism, on into ‘room space’, then space seen through windows, and finally out into the public space outdoors.

Anchoring each of his six chapters to a major work, he first discusses The Blue Room from 1901, with its bath and body. Clark examines the painting’s colour, tone, scale, gesture, contrasts, proportions and space that tell of ‘what it was like to be naked in a room long ago and feel its walls and floor and heavy furniture as so many dependable familiars’.  For Clark this painting says all that Picasso was capable of saying about being-in-the-world at that point in time.

Clark is convinced that ‘somewhere at the heart of Picasso’s understanding of life…lay an unshakable commitment to the space of a small or middle-sized room and the little possessions laid out on the table. His world was of property arranged in an interior: maybe erotic property’. Thus he places Picasso in 19th-century bourgeois society in which he was brought up. Clark argues that, despite its claims to modernity, there is much in Picasso’s work that looks back. Picasso himself described his collages at the time as Procédés paperistique et poussiereux (outdated paperistic procedures). His use of borrowed, secondary motifs, mother and child, classicism, the work of Ingres, the use of another’s language, all indicates the ‘pastness and otherness of the language in question’.

Objects in Cubist still lifes: newspapers, sheet music, matchboxes, scrapbooks, calling cards, all of them ‘belongings’ that by their nearness and touchable familiarity spell out a bourgeois world on a table. Then there is Cubism’s room space, what Clark terms its ‘high comedy’, expressed in its ‘rooms, interiors, furnishings, covers, curlicues… the “individual” made flesh’. ‘No style besides Cubism has ever dwelt so profoundly in these square feet, this little space of possession and manipulation’.

But if room space, the interior, was the baseline of Cubism in its pursuit of truth, Clark now points to ‘the room’s leakage into depth – the seeming necessity now to put things in front of a window’ as with Guitar and Mandolin on a Table from 1924, and The Three Dancers from 1925.

It is this latter painting that Picasso’s ability to create special reversals, in this case with colour – blue is proximate, red distant, and the Maenad is introduced, a theme that will be developed further in ‘Monster’, the chapter on The Painter and his Model from 1927. Here the discussionappears to digress from that of space, defining monstrosity as ‘what the human reveals of itself, the drama, desires and childhood terrors’ carried within that emerge at a moments of maximum intensity. But this would be significant when it came to Guernica.

The chapter ‘Monument’ uses Nude Standing by the Sea from 1929 to return the discussion to space.  It shows a body in the outside world, in outside space, picturing its becoming sculpture. It is a wholesale revision of scale in Picasso’s art and changes space from private to public. Yet Picasso was more familiar, more confident working with interior than exterior space.

Finally, with Guernica and its imperative of making pain public, both the public and political were expressed. There were many pitfalls that Guernica had to avoid. It had to be believable. A space had to be devised that could contain the action, the instantaneity, the horror, but that would not be obstructed by detail. This, for Clark, is Guernica’s problem and its resolution is the painting’s power.

Clark underpins his argument with the writings of the philosophers Nietzsche, Wittgenstein, Jacques Lacan and Michel Leiris. His discourse is long and complex, and was clearly written originally to be spoken aloud. It appears to digress and repeat itself and may lose many readers. But that said such an analysis is to be welcomed and this volume contains much that can be drawn on over time.

Picasso and Truth, from Cubism to Guernica by T. J. Clark,  The A. W. Mellon Lectures in the Fine Arts, Bollingen Series XXXV. 58, Princeton University Press 2013

BUY Picasso and Truth FROM AMAZON