Cézanne in his own words 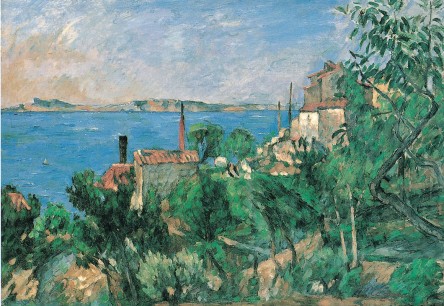 The Letters of Paul Cézanne, edited by Alex Danchev

What can one expect of the letters of an artist who commented that ‘talking about art is virtually useless’? Quite a bit, as it happens. Nonetheless, as is typical for Cézanne – this elusive and contemplative artist – it is mainly tangential in nature.

Unlike his loquacious contemporary Vincent Van Gogh, Paul Cézanne (1839–1906) was not given to artistic discussion in correspondence. Cézanne was not much given to anecdote or explanation either. He fought shy of making artistic statements until young admirer Émile Bernard got a few sentences out of him late in life. ‘With Bernard one could go on theorizing indefinitely, for he has the temperament of a logician’, Cézanne later grumbled to his son.

It is ironic that the two most difficult and advanced painters of this era – the very ones who found least success in their lifetimes – had the most influence over subsequent art. Cézanne, admirer of Delacroix, Monet and Pissarro, would be emulated by the Cubists, while Van Gogh, admirer of Millais, Daubigny and sentimental woodcut illustrations, indirectly founded Expressionism. Neither artist would likely have cared for the artists who adulated them. Cézanne even wrote: ‘If they give me an ovation, don’t believe it; if they try to found a school in my name, tell them they never understood, never liked what I did’.

The editor is Professor Alex Danchev. He recently published an intelligent and informative biography of Cézanne and so had to consult these letters at length. Danchev notes in his introduction that earlier editions were inadequate in many respects. ‘An examination of all extant original manuscripts reveals that the letters in the Rewald collection are riddled with textual errors and inaccuracies’. There was also new material to add.

Danchev also disagrees with the tone of previous translations and has adopted a more direct rendering, making the artist blunter than he had seemed in previous polite translations. This translation reads well, though Danchev has sidestepped the problem he found with rendering mon cher as ‘my dear’ (which he describes as unintentionally camp). Instead he keeps mon cher in the original. Overall there is little here that will send the reader reaching for a French–English dictionary.

This edition includes 252 letters from Cézanne, with extensive footnotes explaining references non-specialists would miss. Twenty-six letters (and extracts thereof) by those in Cézanne’s circle fill in absent detail and show us how the painter was perceived by those around him. Included are facsimiles of letters and illustrations of the few paintings referred to directly by Cézanne and his correspondents.

Poetry collections have an advantage over comprehensive collections of letters in that the former consign juvenilia to an appendix and start with the stuff everyone came to read. The opening of this completely new edition of the letters is a sequence of youthful letters to future novelist Émile Zola which mix badinage, gossip and translations of Latin epic poetry. Most readers can skim these without loss, though the editor rightly points out that although the poetry is negligible in itself, it does point out shared interests of the painter and writer. Additionally, it reminds us that Cézanne had a first-class classical education, something early critics tended to overlook when typecasting the artist as an uncouth boor.

One of the still unresolved questions is why Cézanne and Zola ended their long and close friendship around the year 1886. The standard interpretation is that Cézanne was offended by Zola’s novel L’Œuvre (His Masterpiece), which tells the story of Claude Lantier, a failed artist who commits suicide. Lantier is commonly seen as a thinly disguised portrait of Cézanne. Danchev maintains that the break was actually a case of gradual estrangement – a lapse rather than a split –Zola became more preoccupied with social causes and social engagements as the painter became ever more dedicated to his researches into painting. The letter acknowledging receipt of Zola’s novel is polite, neutral and short, failing to provide either side of the debate with viable evidence.

Some letters provide touching insights into Cézanne’s character. He wrote asking favours for associates and colleagues, even people for whom he did not have a natural affinity. There are friendly and affectionate family letters. It seems Paulfils was in the habit of disposing of old letters annually and only kept his father’s letters from the last year of his life. It is a shame we don’t have more of these, as they are particularly informal and personal.

Danchev has twice honoured Cézanne: once by presenting his life in an informative and even-handed biography and again by allowing us to read the artist in his own words in a faithful English translation for the first time.

BUY The Letters of Paul Cézanne FROM AMAZON