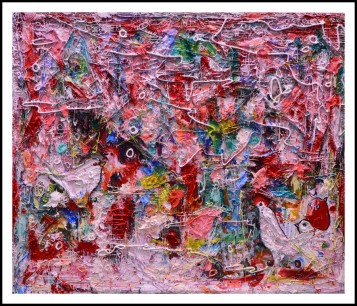 Abstract expressionist Costel Iarca made his mark on the Chicago art scene nearly two decades ago when he emigrated from his native Romania and called the Windy City his home in a pronounced Eastern European accent. Rather than fading into oblivion like most shooting stars, his perseverance – or, perhaps, his inspired boldness – led to a series of exhibitions and galleries in the River North Gallery District, along the Gold Coast, and on Michigan Avenue. His longest-maintained studio, on the fourth floor at Chicago Place, stayed active for seven and a half years, making him a familiar local personality with long, untamed hair pulled back from his face. Those dark locks are now cropped to a moderate length. His background was important to him: ‘From my hard-working, middle-class Romanian family, I learned human dignity and persistence’.

An avant-garde tourist attraction that attracts many art connoisseurs, his ‘working gallery’ concept showcases his canvases in a formal installation, while incorporating the casual, dirty-hands creativity that gives the visitor a glimpse of the man behind the paint. He explains that: ‘All creation is process. The art of the human reflects this evolving process’.His newest gallery, near the Art Institute of Chicago at the corner of Van Buren and Michigan, is a sprawling space that features his flamboyant paintings beneath an airy loft studio. Resolute and fervent, Iarca juxtaposes his artistic appetite with the hardcore cynicism of a businessman. An intriguing synthesis of liberal and conservative, he combines rebellion and spirituality, spattering pigment in a multitude of directions. He had once planned to enter religious ministry, earning a doctorate in theology and philosophy as well as a bachelor’s degree in art. But he decided to pursue art, eventually developing an application technique that he patented in the USA and Europe.

His signature pieces texturize the surface—three-dimensional blocks and streaks of colour (‘Color reflects the soul’s beauty though it is circumscribed by the body’). In his figurative work, intricate patterns strategically draw the eye. He likes to tell the inquisitive that every painting remains unfinished, like the human soul. Yet his mystical side succumbs to the monetary demands of operating a sophisticated urban gallery even though he has said: ‘There is no bottom line in art’.

Childhood training with rudimentary tools such as cardboard and handmade brushes prepared Iarca for a fine art career. Instructed to emulate the masters, he obediently complied, but only for a short while. He believed his destiny extended beyond copying the grand works of classical artists. A desire to make his mark, even to the point of annoying critics, propelled him to elaborate experimentation: ‘We simultaneously incorporate and transcend the past’.

Occasionally seen as haphazard in his approach, Iarca never accepts any canvas as the definitive product. Only one possible manifestation of his efforts, each painting is a reflection of his mood and outlook – subject to change. Odd, at least from a commercial perspective, but his flexible prototypes spawn similar, yet subtly different expressions that capture specific elements. Iarca uses strangely logical principles in the layout of his shapes and symbols and in his integration of colour. What began as a simple mixed-media application – melding acrylics and caulk into a textile-like canvas – evolved into creations laden with heavy, paint-soaked swatches of fabric attached to the surface:  ‘In creating a painting, I experience myself at the center of an evolving, dynamic universe’.

His gallery showcases his signature style, tactile pieces that flaunt his unique mark, along with less time-intensive abstracts and figurative works intended to reach a mainstream buyer. Just as his paintings are filled with contrast and incongruity, his personality is complex and contradictory. An insightful intellectual with a cynical attitude toward monetary feasibility, he advises students not to pursue a career in art unless they are prepared to suffer through hardship. This commonsense discouragement he counters with an uplifting note on divine inspiration and long hours in the studio: ‘Art is human magic’.

Speaking English as a second language, he expresses frustration over the inability to convey exactly what he is thinking in his native Romanian. His visual images are his communication tools, enhanced by straightforward honesty in his choice of words, even if the finer nuances escape him. Always in touch with his inner spirit, he delves into the deepest parts of his psyche to reach emotions that spark his imagination: ‘Because I experience strong emotions while painting, I express them in strange shapes and brilliant, vibrant colors’.

This was the basis for the Abstract Expressionist movement that began in Germany in 1919 and later became associated with the  ‘New York school’ in the 1940s and 1950s. Iarca’s goal is to build on the achievements of his predecessors, not to emulate them. He sees the art world as a global pyramid in constant development – every artist contributes a significant piece to its never-ending construction: ‘My emotions fuel the squares, curves, and the textures of my canvases’.

Outgoing and demonstrative, he embraces his friends and often cautions people to beware of wet paint on his clothes. His gallery is not supervised by a representative in a suit, ready to close the next deal with a wealthy patron. His brother, a ceramics craftsman with a sense of humour, manages the business when Iarca cannot, but usually the operation is a one-man endeavour with Iarca selling his own work. This may give him a professional edge, especially among aficionados who enjoy talking with the man behind the paintbrush. Yet without a dealer acting as an intermediary, he must present himself in a flattering light that will encourage a potential buyer: ‘Our human predicament is both to acknowledge our limits as well as to strive to transcend them.’

His studio is private, unless he extends an invitation. Few see numerous canvases in progress, stacked against the wall and laid flat on the floor. Here, heady fumes conjure up images of an artistic bakery. Open cans of paint with brushes of various sizes, like a rainbow of frosting with butter knives, are strategically arranged on a surface that resembles a chef’s workstation. Reminiscent of an action painter’s abode, Iarca’s space is not a conservative easel and stool setup with an orderly palette on a side table. With a tendency to disregard air quality, he will immerse himself for many hours during a burst of inspiration, sometimes working throughout the night: ‘The radical energy of my colors reminds me simultaneously of life and death.Both are our destiny’.

While enduring times when he loses inspiration or, maybe, when he just needs to breathe, he follows up on pending transactions. Though most of his sales have been of work displayed on his gallery walls, he accepts occasional projects on commission. Aware of the unpredictable nature of the market, he plans for the future, since one high-revenue month is not an indicator of the next. Unsettling dry periods are an opportunity to rejuvenate or stagnate. He fluctuates between optimism and pessimism during these phases – his resilient side takes over for the deflated ego.

Chicago he sees as an architectural masterpiece that guides his vision ever upward. Perhaps it is the act of looking into blue-sky infinity, or better yet, the need to stay grounded in metropolitan reality that keeps him motivated: ‘I use much blue, not only for the sky and sea, but for the soul’s striving toward the infinite’.

More of Costel Iarca's work can be seen on his gallery website.

The quotations used are excerpts from Iarca’s artistic statement; they are copyrighted by his gallery and used with permission.