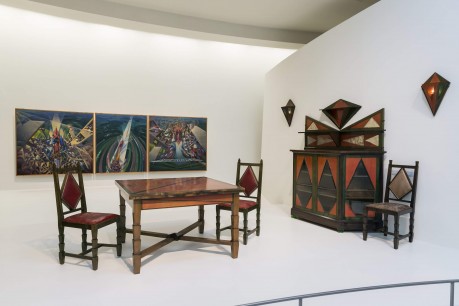 Italian Futurism was included in the ‘Cubist and Abstract Art’ exhibition at the Museum of Modern Art (MoMA), New York, in 1936 for its role in the historic avant garde. The show was curated by Alfred H. Barr, MoMA’s first director. In 1949 it had a cameo role in ‘Twentieth-century Italian Art’, again at MoMA, along with the metaphysical painting of Giorgio De Chirico (1888–1978),  the realism of Renato Guttuso (1912–87)  and abstraction of Giuseppe Santomaso (1907–90) and others. Even the ‘Futurism’ show at MoMA in 1961 concentrated on the early years of the movement, although it included now overlooked artists, such as Ottone Rosai (1895–1957), Leonardo Dudreville (1885–1975) and Ugo Giannattasio (1888–1958).

This approach fitted into the prevalent view of modernism as ‘progressing’ steadily towards abstraction, with Futurism as a necessary step between Cubism  and Dada and Surrealism, and allowed Futurism’s involvement with fascism to be overlooked. It was with the publication of Christine Poggi’s pioneering In Defiance of Painting (1992) that Futurism’s connections with Cubism were explored, and how they operated for a while in a mutual dialogue. The 2008–9 travelling exhibition ‘Futurism’ (Paris, London, Rome) used Poggi’s work to explore the impact of Futurism on the Section d’or and Orphism movements (both concerned with different aspects of Cubism). Without Futurism, Marcel Duchamp’s Nude Descending a Staircase, No.2 (1912) would be impossible. And this exhibition also looked at the Futurists’ connections with Vorticism and Russian Cubo-Futurism.

The current exhibition, ‘Italian Futurism’ at New York’s Guggenheim focuses on Italy – and a much wider Italy than Milan, Rome and Florence, as a wall diagram in the exhibition attests. But it therefore isolates or literally insulates a movement that was truly international, not least through its manifestations in paper: manifestos, books and little magazines (which were shown at the ‘Breaking the Rules’ exhibition at the British Library, London 2007–8). On the other hand this exhibition can justly claim to be the first one outside Italy to encompass the whole of Futurism from F.T. Marinetti’s manifesto of 1909 (which launched the movement) to the end of the Second World War and Futurism’s demise. It is also the first to reflect activities beyond painting and sculpture – architecture, ceramics, fashion, graphic and furniture design, film (perhaps, surprisingly, the most underdeveloped Futurist practice), music, photography, performance, poetry, publishing and theatre.

The exhibition is arranged in chronological order and ascends Frank Lloyd Wright’s spiral ramps (as one wonders what the Futurist architect Sant’Elia would have made of the building). It begins with an exploration of the manifesto format: the Futurists had manifestos for just about everything – not just painting, sculpture or words-in-liberty but cookery and lust. The formula was there in Marx and Engels’ Communist Manifesto (1848) but Marinetti and the Futurists elevated it to new notes of stridency, attacking the ‘incubi’ of civilization, from pasta to the Winged Victory of Samothrace and elevating the new, speed, technology and war.

The evolution of a visual style began in1911. At first it was based on Neo-Impressionism and Divisionism (Pointillism) and with philosophical roots in the writings of the philosopher Henri Bergson (1859–1941), who valued experience and intuition over rationality. But inevitably it had to come to grips with Cubism in Paris and Futurism did contribute to the evolution of collage,  as in Carlo Carrà’s Interventionist Demonstration (1914).

The next section of the exhibition explores photography and the work of Futurist photographer Anton Bragaglia (1890–1960). Etienne-Jules Marey’s  study of movement had informed Giacomo Balla’s  painting – and indeed, the word ‘movement’ with which Marinetti described Futurism comes from Marey.

The exhibition expands at this point to include drawings by the architect Sant’Elia, words in liberty by Marinetti, Paolo Buzzi (1874–1956) and Carrà, ceramics by Balla and Tullio d’Albisola, clothing by Balla, Fortunato Depero and Prampolini , toys by Depero, and graphic design by Depero.  In the 1920s a machine aesthetic seems to become predominant although taking different forms, some of which are unmistakably art deco. The following decade saw an interest in aeropittura (paintings concerned with manned flight) and a fascination with planes, aerial views, etc.

At the top of the ramps in a large gallery are five monumental canvases for the Syntheses of Communications (1933–4) from one of the very few commissions the Futurists actually received from the Fascist government in the 1930s. These were for the Palermo Post Office and celebrate modern communications. They were executed by Marinetti’s wife Benedetta (Benedetta Cappa Marinetti). She had also been in charge of the posthumous casts of Umberto Boccioni’s sculpture after his death in the First World War. For all the Futurists’ theorizing that women were passéistes, there were many women involved in the movement, from the manifesto writer Valentine de Saint-Point to Marinetti’s housekeepers, Marietta and Nina Angelini, who effectively ran Marinetti’s publishing enterprises.

The ascent of the Guggenheim ramps is not necessarily an ascent in quality, and while it is possible to see late Depero as a precedent for Italian Pop art, there is something uncompelling about these late works. It is as if the wish for the total work of art (Gesamtkunstwerk) has been reduced to the making of bric-a-brac for sale in the case d’arte.