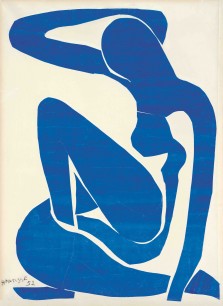 By the end of the Chapel project, the female nude returns as subject matter in Matisse’s art.  Zulma, from 1950, and Creole Dancer from the same year, are outstanding examples of a renewed vigour and confidence in his medium.  In the former, the artist has created a new sense of depth in the composition by letting the nude of the title lean against an angled table into the picture space.  Next to it, Creole Dancer – created entirely from leftover strips of paper – is a deliciously exotic and abstract image of a female figure.

Despite all these riches, the four versions of The Blue Nude from 1952, shown together for the first time, form the high point of the exhibition. They are shown alongside four early bronze nude statuettes, enhancing our understanding of them as sculptural, The Blue Nude being probably the most striking example of the artist’s cutting technique as a form of sculpture. Matisse himself called it ‘cutting directly into colour’ because of the way he cut not just the outlines, but contours into the figure.

In his last four years, Matisse’s work increased in scale with designs for huge wall panels such as The Parakeet and the Mermaid (1952), which dominates an entire room here.  The mermaid and the parakeet of the title nestle among fruit and algae-like forms, typical of Matisse’s representation of nature.  In fact, Matisse, who was by this time too frail to leave his house, described the work, while it was in progress in his studio, as his garden.  Complementing it here is the frieze-like composition Women with Monkeys.  In both of these, arguably, the ailing artist is linking nature and female sensuality.  The Large Decoration with Masks, from the same year, was intended as a design for a ceramic panel.  In its schematic order, Matisse seems to have drawn on memories of Moorish design, but to me it lacks the energy of the two previous works.

More exciting is Matisse’s late abstraction.  Memories of Oceania, a striking image that shares qualities of abstraction with The Snail from 1953, undoubtedly one of Matisse’s most abstract works.  These two extraordinary works were originally intended to form one large composition with Large Decoration with Masks at its centre.  While that never happened, Tate Modern has managed to show the three works together for the first time since they were made in 1953.

‘A second life’ is how Matisse referred to the period from his unexpected survival in 1941 to his death in 1954.  It was an immensely productive period that saw him producing highly original and ground breaking art with his ‘cut-out’ technique and concluded with his satisfaction at having achieved what he had set out to do as an artist, namely to produce art that is joyous.