Catching the sweet life on camera 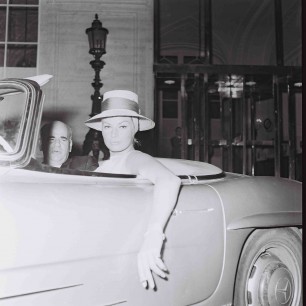 Peter Jones reviews ‘The Years of La Dolce Vita’ at London’s Estorick Collection – intrusive, unsavoury, but glamorous images from Hollywood on the Tiber

The Italian film industry bloomed during the late 1950s and 1960s. It was period of extraordinary vitality and creativity as well as critical and financial success, thanks to directors such as Federico Fellini, Luchino Visconti and glamorous, accomplished actresses such as Sophia Loren and Monica Vitti. American money and stars flooded in, attracted by the low production costs of Rome’s Cinecittà studios and the relaxed, hedonistic lifestyle – the dolce vita (literally ‘sweet life’). The Italian capital became known as ‘Hollywood on the Tiber’.

A new exhibition at London’s Estorick Collection ‘The Years of La Dolce Vita’ (until 29 June 2014) gives a fascinating view of this period through the photojournalism of Marcello Geppetti (1933–98). Considered one of the best of the paparazzi, Geppetti was noted for his audacity and the technical quality of his work, which comes through at the show. It features 80 black-and-white photographs showing celebrities in the streets, bars and restaurants of Rome: Frank Sinatra, Gina Lollobrigida, Rock Hudson, Jane Fonda and Marcello Mastroianni, to name but a few. Some shots were probably consensual and staged, but Geppetti had the uncanny ability to catch the unexpected and dramatic, such as B-movie actor Mikey Hagitary riding a horse down the exclusive Via Veneto – the heart of the celebs’ playground.

Geppetti pushed boundaries, too. He was not afraid to photograph Bridget Bardot sunbathing topless or take ‘upskirts’ shots – now a staple of today’s paparazzi. Geppetti’s prey wasn’t just film stars. He also captured Brazilian soccer ace Pelé, The Beatles, and crusading politician Robert F. Kennedy, who didn’t appreciate the Italian’s presence. Many of the photographs are enlarged and all are beautifully printed and, being spread over two galleries, the display never feels overwhelming. What’s missing, though, is the so-called ‘yellow press’, the sensationalist publications Geppetti’s work appeared in. It would have been interesting to see examples of how his photographs were used and their wider context; the dolce vita years coincided with Italy’s ‘economic miracle’ and a media explosion.

The exhibition also features photographs by Arturo Zavattini (b.1930), a director and cameraman. These are intimate and relaxed behind-the-scenes shots of Fellini and others working on the classic 1960 film La Dolce Vita, which examined the world of Rome’s jaded glitterati. Fellini’s picture gave us the word ‘paparazzi’. It was derived from one of the film’s characters ‘Paparazzo’, an annoying photographer purportedly based on real-life snappers.

Despite the glamour, living in Rome and, especially, shooting on location wasn’t easy. Gregory Peck recalled: ‘It was like acting in huge amphitheatre before a packed house of rowdies’.  Geppetti trailed one of Peck’s co-stars Audrey Hepburn out shopping for groceries. A close-up, taken in a bakery, shows Hepburn with head bowed, eyes closed and clearly exasperated. Others gave the press what they wanted, artfully trying to control their public image; some were impressively impassive or just too drunk to care. Occasionally the stars fought back. In a bizarre sequence of photographs akin to film stills, the statuesque actress Anita Ekberg advances with bow and arrow on the paparazzi outside her home, like some modern-day Diana, Roman goddess of the hunt.

The intrusive and often unsavoury nature of paparazzi work is evident. Geppetti was relentless in tracking down celebrities on his Vespa scooter. One zoom-lens shot went too far: Richard Burton and Elizabeth Taylor kissing. It revealed their illicit affair. One does feel like a voyeur when looking at Geppetti’s work – perhaps that’s part of its appeal. Indeed, it was included a recent Tate Modern show ‘Exposed: Voyeurism, Surveillance and the Camera’.

The Estorick exhibition does make one reflect on privacy, contemporary celebrity culture and its Italian roots. Yet, despite the work’s unseemly aspects, in the well-illustrated soft-back catalogue curator Massimiliano Di Liberto argues that the ‘sweet life’ era was ‘a source of national pride’ that showed the world that Italy had recovered from the war. Above all, ‘The Years of La Dolce Vita’ evokes an extraordinary time when most stars at least had substance and style, especially when compared with today’s often tawdry, vapid celebs.

'The Years of La Dolce Vita' is on until 29 June 2014 at:
Estorick Collection of Modern
Italian Art
39a Canonbury Square
London N1 2AN