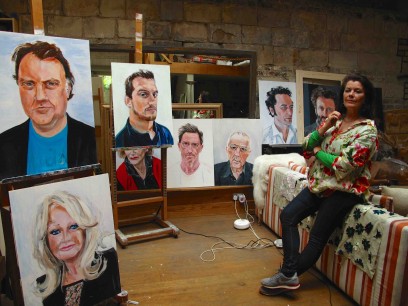 Janet Lance Hughes, Fellow of the Royal Society of Arts, is recognized for her distinctive portraits. She talks to Rosalind Ormiston

Janet Lance Hughes' recent exhibition at Hay Castle, part of the Hay Festival at Hay on Wye, Wales, featured a series of 11 portraits of Welsh ‘icons’, people highly visible in the Arts, in film, theatre, science, sport and music.

Rosalind Ormiston: Janet, your recent exhibition ‘Welsh Icons’ places a spotlight on how many famous ‘names’ known throughout the world were born in Wales. Can you tell me first about your Welsh roots?

Janet Lance Hughes: My father was born in Wales and his father was employed as a compensation officer in the Welsh coal mining industry. It brought him close to the financial and physical suffering of miners. It was an awful job. My granddad was constantly on the side of the miners. My father was brought up with that background. He got a scholarship to London to study Law and Veterinary Science and got himself transferred to Liverpool so that he could ride home on his racing bike. He couldn’t afford the train journey back to Wales!

RO: Did you inherit your interest in art from your family?

JLH: Yes, my Dad was a very keen collector. He spent any money he could on art. He had very beautiful paintings. I remember going with him once to a gallery near Cheltenham when I was very young and looking at this absolutely beautiful painting on the wall. It was about 8 or 9 inches square. I remember reaching up to it absolutely in awe and the gallery owner shrieking ‘Don’t touch!’ It was a very early Matisse painting. It was of a ceramic pot, and painted with the most exquisite jewel-like colours. You just had to reach out to it. My father also collected landscape paintings too, one in particular by the Spanish artist Sorolla.  [Joaquín Sorolla, 1863–1923].

JLH: Oh yes. He was absolutely amazing. Another thing I have always loved is woodcarving. We used to go to lots of local churches and other buildings to study the craftsmanship. I remember we had a wonderful table in our house which had huge, heavy, carved legs with Victorian ‘grotesque’ gothic heads on it. I used to sit under that table when I was little and be completely transfixed by the images and the craftsmanship.

RO: Was it your Welsh heritage that instigated the ‘Welsh Icons’ portraits?

JLH: Yes. It all stems from that enterprise of my Dad. When you look at the amount of talented people that have come out of Wales, in the sciences, industry, poets, novelists, actors, sport, it’s immense.

JHL: Yes. I was delighted that they all agreed. It began with the actress Sian Phillips, a very beautiful woman. I had read about her life and visited her at her home in London.  She spoke about her family farm in Wales. When I met Gareth Edwards he told me that he and Sian are from the same tiny – one street – village.  It made me realise how much talent there is in one street in this small country. They both agreed to sit for a portrait.

RO: You have created the series over the last 18 months. Did you finish one portrait before starting the next?

JLH: No. I work on more than one at a time. It gives me time to think about each work without concentrating solely on one piece.

RO: I have read that your method is to meet sitters in their homes, to sketch them and measure their faces and hands. Could you explain your preparation process?

Many sitters are put off by the prospect of long, drawn-out sessions so I use all methods of memory. When I first meet them, during that introduction, I make rapid 2-second, 5-second sketches of my first often ‘shock’ reaction, to seeing them up close. I’m looking at proportions, irregularities. With the sketches I make notes on their features, stance, character.  The measuring process is really, really important because it allows you to get up close to someone without them feeling you are in their face. I always take measurements of the face and hands. Hands reveal much about a person. For example, Gareth Edwards [former Rugby professional] has very powerful yet extremely elegant hands, which one might not expect.  This measuring method has a calming influence on the sitter although one is fiercely engaged. When that process starts people completely relax and they open up to you. It helps me to capture the technical aspects and the essence of the person. After that I take five or ten photos on my iPhone, and do a skin-tone check. But it’s the memory of being in the room with the person that is the most powerful.

RO: When I saw the portraits in your studio I felt I was in the presence of the sitters. They were there. You had captured the essence of their personality.

JLH. Thank you. I have spent loads of time in the past in the National Portrait Gallery trying to work out what portraiture is actually about. Up until the time of David Hockney I don’t think there was much attention paid to getting the feeling of the person; it was more about getting the face of the person in the portrait. It was more about conveying the trappings of the person’s success or wealth. Hockney changed that.

RO: How much of the actual portrait is created in the sitter’s presence, and how much after the sitting?

JLH: Sometimes there is just one sitting, usually at the person’s home. I carry my studio there. After that I complete the work in my studio.

RO: I read that ‘Welsh Icons’ is part of your ‘Line of Influence’ series of works which you began in 2009. Could you tell me about that?

JLH: When I was teaching fashion and textiles at Central St Martins [London] one could see the whole history of modern fashion, year on year, from what the students wore.  It occurred to me that many now famous designers, artists and actors had, during their time there, walked through the doors of the room where I taught, a sort of ‘line of influence’. I created a series of 32 portraits of former students, including Colin Firth, Peter Blake, Glenn Matlock, Simon Callow, Terence Conran, Barbara Hulaniki and Gareth Pugh. They were exhibited at Kings Place Gallery as part of the celebration of Central St Martins’ move to Kings Cross, London.

RO: Which is your preferred medium for painting?

JLH: I initially painted in oils but when I was painting Peter Blake’s  portrait we discussed our different methods. His preference is acrylic. I was converted and changed to acrylic paints. The ‘Welsh Icons’ series is in acrylic. With oil there is little room for error, it is a much longer process. With acrylics one has time to wipe off the paint and change it. Fast work is much more exciting in a way.

RO: From the current series are the portraits for sale?

Many of the sitters want to buy their own portrait. Ideally I would like the works to be sold as a complete collection. I’m in touch with Nicholas Thornton [Head of Fine & Contemporary Art], at the National Museum of Wales. And there are further exhibitions lined up for them: ‘Welsh Icons’ will hang at Stephen Terry's restaurant ‘The Hardwick’, during the Abergavenny Food Festivalin September, and possibly be part of Wales Week in New York City  [an annual event]. Theywill also hang at The Corran Hotel Laugharne, in this year of Dylan Thomas's centenary.

RO: Do you have a favourite portrait painter, or painters?

JLH: Yes, Ruskin Spear (1911–90). He was absolutely alarming. He was a very emotional painter. They were very small paintings but very powerful. Also  Graham Sutherland (1903–80), he had a wonderful technique. And David Hockney,  he is startling for his directness and modernity. When I started painting portraits I thought I do not want to paint portraits that just look like existing portraits. I want to get a different feel in the portraits.

RO: Is there anyone that you would particularly like to paint?

JLH: I would like to paint a portrait series of the current Royal Academicians.

RO: Your immediate future project is a series of ‘en-plain-air’ landscape paintings. Where will you paint?

JLH. I love painting landscapes. This summer I am going back to Wales. I shall pack up my car with paints and head for the Welsh mountains, set up the boards – about 2 x 3feet [c.60 x 90cm] in size – and acrylics, and paint on site. They will be very fresh paintings with no studio touching up at all. I feel very excited about it. You get the feel of the air in paintings when you do that.

RO: It sounds like a wonderful summer Janet. Thank you so much for talking to Cassone.