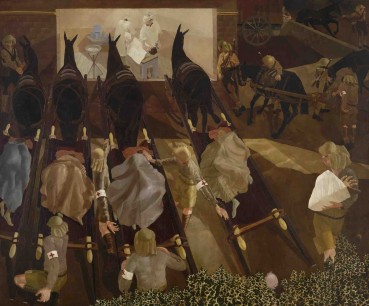 Metropolis meets Blade Runner in the IWM’s latest incarnation, marked with a major exhibition on art of the First World War, ‘Truth and Memory’

To crudely paraphrase Richard Hamilton, just what transformative powers must a major national museum have to continue to make itself so attractive, so appealing? There is no single answer, as the recent Lambeth makeover of the Imperial War Museum (IWM) shows: every one of the thousands who have packed the building since its re-opening will have their own views, but as far as the museum’s art collections are concerned, the future looks bright.

In terms of bricks and mortar, the IWM’s institutional history has been chequered. Without a home at its inception in 1917, it first occupied space at the Crystal Palace and then in the former Imperial Institute, South Kensington, before coming to rest in London’s Lambeth district in 1936. There, even after bomb damage, the museum remained essentially a converted institution, and no serious attempt was made to alter its interior design until floods forced an overdue reorganization of the art store in the 1970s. A major refit followed in the early 1980s, when the central atrium was fully opened up with its floor raised to the same height as the reception area, the present art galleries were installed, and the curved glass roof arrived. Smaller adjustments have taken place since, but the museum’s newest refit is thought-provoking, to say the least, and some reviewers have already set aside the aesthetics of the redesigned interior, preferring to introduce polemical debate to question the need for an institution whose title includes the words ‘imperial’ and ‘war’.

To walk into the new interior at Lambeth is to experience deja-vu. The exhibition galleries of the IWM c.1950–80 were dark, mysterious, sometimes forbidding places, and now they are once more overshadowed. The raised floor has gone, and visitors once again walk down to the atrium floor. The greenhouse skylight is obscured by a floating roof, and the walkways around the upper tiers of the building present themselves as a series of ascending modules, from which exhibits protrude. There is a sense of Metropolis meets Blade Runner about all this. The staircases are stark, angular and black, the old display platforms on each floor are darkened, and everywhere the number of artefacts on display has been significantly reduced. New core displays on the First World War have been introduced, and it is natural that this will be the IWM’s educational priority over the next four years, but, by the same token, other, more recent material has also appeared: the shattered bodywork of a bombed-out car is a new arrival, replacing the foreign armour of 1939–45.

It is hard to know whether this designer-darkness is a conscious attempt to introduce some commonality between IWM London and Daniel Libeskind’s   extraordinary overall design for IWM North (2002). When the Manchester museum opened, with its crazy-house floors, its interactors and its ‘time-stacks’, it offered at the very least an inspirational basis from which to work to engage younger minds on the past, in all its forms. What IWM North did not have at its inception was an art collection; nor did it have an especially appropriate area in which to exhibit more prosaic items such as framed paintings. IWM London has always held the second-largest collection of British art in the country.

Within the new Lambeth refit, the IWM’s Department of Art is clearly a muscular presence, its main display spaces have escaped refashioning, and in its opening exhibition, ‘Truth and Memory’, these provocative concepts and their relationship to the art of the First World War have been put to the test at several levels by the department’s senior curator, Richard Slocombe. Slocombe wants to challenge the ways in which the beliefs and ideals of an era can be represented through its art in a meaningful way. What if those ideas were misplaced from the outset? What about the extremes of critical response exercised, first, by contemporaries, and then by generations of writers who wished to use the art of 1916–20 for purposes that were often alien to the ideas of those who commissioned it?

Slocombe says he wants to re-examine the impact of the works accumulated in that era by the Ministry of Information, and their deliberate dissemination through books and exhibitions, with and against the accretions of cultural baggage accumulated in the wake of the war. He wants to deal with this through a series of examinations of its varied interpretations, and to move on with re-evaluations of the range of the IWM’s art collections. To pursue this to its ends will be an enormous task, but the reality is that, like the museum’s re-vamp, regular action will always be necessary to promote generational fine-tuning in this area of extraordinary visual endeavour.

Slocombe’s show presses for an early result: he notes the critical reception of the war artists schemes at the RA in 1919–20, when approximately one-third of the collected works were presented, and the importance of contemporary publications devoted to those artists who have come to be regarded by posterity as visual touchstones. But there are other issues raised in this show, including the comparative anonymity of so many artists, especially women such as Flora Lion, and the inestimable Dorothy Coke, and what should be the realization amongst the exhibition’s audience that so many of the participants whose lives and activity are recorded have come to be anonymous to posterity. The point might be made emphatically in the room devoted to the work of Sir William Orpen,  where three portraits of airmen hang side by side. They are compelling images, particularly for their evident relative youth, and for their range of facial expression. A pilot’s life on the Western Front was calculated in days. The notion of a portrait in the middle of a war by the country’s best portrait artist is quite a facer, and the issue of anonymity is introduced elsewhere, in a 1919 suite of extraordinary etchings by Percy Smith: not a name with which to conjure, but a new one to compare most usefully with Otto Dix.

‘Truth and Memory’ runs across the IWM’s two art galleries, and presents some of the representative works one would naturally expect from Paul Nash  and John Nash, Nevinson,    Orpen, Eric Kennington, John Lavery,  Wyndham Lewis,  William Roberts and Sir George Clausen, plus – inevitably – Sargent’s Gassed. If this is an over-familiar roll call to some, it won’t be to others, and if you are starting from the bottom it isn’t possible to consider, or to introduce, British art of 1914–18 without Over The Top, We Are Making a New World or Paths of Glory.Slocombe hasa sleeve-full of aces at his disposal, and he is a long way from using them up. Stanley Spencer’s  Travoys faces Lamb’s Irish Troops Surprised by a Bombardment: a natural comparison of two great paintings, and with them in the same room lesser-known but compelling works by Sydney Carline and Bernard Meninsky. One of Eric Kennington’s very finest moments, and one of the earliest great Great War paintings, The Kensingtons at Laventie, an oil on glass of 1915, has now been stabilized and continues to work its magic, with Kennington’s own self-portrait and the acutely painted portraits of his platoon, in grim surroundings.

Slocombe’s finale is an upset in the holy of holies, the IWM’s John Singer Sargent room. For years devoted to Gassed, and to watercolours of Sargent’s 1918 journey to France, the room now hosts a huge plaster by Charles Sargeant Jagger , intended for the British War Memorials Committee’s unrealized Hall of Memory, intended to contain paintings including The Menin Road as well as many of those mentioned here. Jagger’s The Battle of Ypres, 1914: The Worcesters at Gheluvelt (1919) has been stored at the IWM’s branch at Duxford and unseen in the IWM since Anne Compton’s explosive 1985 Jagger retrospective. Slocombe says he really wanted sculpture in this display, and this is as good as it gets: he includes the Jagger maquette for No Man’s Land, accompanied by dramatic portrait heads by Epstein, Derwent Wood and Kathleen Kennet (wife to Captain Scott),  supported by Clausen’s In the Gun Factory, Woolwich Arsenal,  Orpen’s To The Unknown British Soldier in France, and medallion work, received by every family with a fallen relative.

The selection of this show is nothing if not just, despite its omissions (there will be many lists), and Slocombe introduces some important and fundamental questions in his engineered face-off between Sargent and Jagger (is there some unintentional irony that allows John Singer Sargent to confront Charles Sargeant Jagger?), and the nature of commemoration and the uses of memory as epoch had followed epoch. His combination of large and small works offers enormous conceptual breadth for discussion, especially the valuable supporting material contained in the old fashioned vitrines in this room. These contain photographs of the IWM displays at Sydenham and South Kensington, the 1920s ’hang’, and the commemorative medallions mentioned above, mute throwbacks to the 1920s and beyond. The truths here are too numerous to define, and now, in 2014, Memory is a wild card, and needs to be played.

'Truth and Memory: British Art of the First World War' is at the Imperial War Museum until 8 March 2015