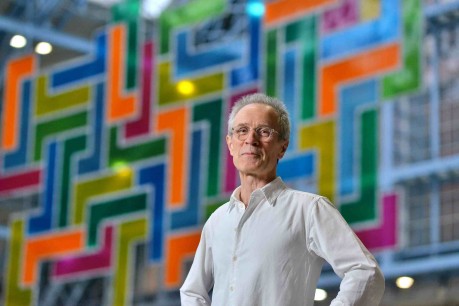 London’s St Pancras International Station boasts one of Europe’s bravest public art programmes, which sees the very best in contemporary art suspended from its enormous (243ft wide x 100ft high) Barlow shed. Now station workers and passengers have been basking underneath a bright rainbow of colour. David Batchelor’s Tetris-like creation, Chromolocomotion, is currently suspended high above the millions of visitors to the station, lighting up the concourse  with a kaleidoscope of colour. It is the latest piece of art in the rotation, and has been on view since 1 April this year.

Since 1990, Batchelor’s art has typically focused on the use of intense artificial colours and their application within the urban environment. Here he talks to Sue Ward about his work.

Sue Ward: David, do you primarily see yourself as a sculptor, artist, designer or a combination of all three?

David Batchelor: I work in several mediums – painting, sculpture, photography, drawing –so it is simpler just to call myself an artist.

SW: Can you tell us how you followed the path you are now on? Did you always want to be an artist, even as a child?

DB: It’s all rather predictable: I always drew and made things when I was a child and I was always encouraged to at home and at school. There was never much doubt I would go to art college when I was 18, but it is always much harder to keep the momentum going after leaving college. I tried out quite a few different things – teaching, research, and writing – and on a couple of occasions I tried quite to get out of art altogether. But that didn’t work too well.

SW: Where did you study art and how influential were your studies to your current work?

DB: I went to art college in Watford and then Nottingham, where I was taught by some first generation conceptual artists, mainly the Art & Language group [a group of Conceptual artists set up in 1967 in the UK]. That had a lot of influence on my attitude, my reading and my politics, but the work I make now has nothing to do with Conceptual art. I followed that with an MA in Cultural Studies, where I was taught by Stuart Hall,  amongst others. There was no discussion there at all about art, but it had a significant effect on my writing.

SW: Your beautiful installations have been sited literally all over the world. Were any of the sites particularly challenging?

DB: To be honest St Pancras was one of the most difficult sites, largely because the architecture itself is so intrinsically interesting. Most venues for art are relatively neutral and you don’t have to worry too much what is behind your work and around it. St Pancras is something else: a stunningly beautiful orchestration of steel and glass, one of the greatest pieces of industrial architecture that exists. That doesn’t make things easy but at the same time I wouldn’t have missed the chance to do something there.

SW: How did your installation at St Pancras come to be commissioned, what was the thinking behind it, and why does it take the form it does?

DB: I was invited to make a proposal by the commissioning team, led by Nicola Shaw of HS1, the company that own the station. It was a small competition, which is typical of these projects. I always begin by making drawings in a very informal way. All were made in direct response to the architecture of the station and the space above the platforms. I wanted the forms of my work to echo the structure of the steel and glass canopy but also to stand out from it. I imagined the work as a temporary, abstract, stained-glass window for a cathedral of industry. It took a long time to work out the final form; I tried all sorts of shapes – circles, triangles, rectangles – and all sorts of compositions before I settled on the interlocking ‘L’-shaped elements.

SW: Colour and light are integral to your work. As you have at least two books Chromophobiaand The Luminous and the Grey[reviewed in this issue]on these topics, can you explain just why you feel so strongly about them?

DB: Colour is a given of everyday existence but at the same time we hardly know what it is. It remains at the limit of language and understanding. So to study colour is to be reminded of what we do not know and perhaps cannot know, and I think that is why some philosophers, writers and scientists, as well as artists, have been drawn to it. It is also why many others have tended to avoid colour completely: it is immensely elusive and unpredictable and also, in its way, completely useless. We don’t really need colour to find our way around the world, and yet it remains an immensely powerful presence in our lives.

SW: It has been said that your work, while three-dimensional in form, often refers to the history and condition of painting.  What do you think was meant by this, and if you agree with it can you suggest any examples to illustrate such a statement?

DB: Almost all my work is very flat and frontal, even when it is three-dimensional and free-standing. Much of it feels like extruded painting; some of it is extruded painting. And most if not all artists who have worked with colour have worked mainly in two dimensions. A work such as Magic Hour, which was exhibited last year in ‘Light Show’ at the Hayward Gallery, is made of old lightboxes, coloured Plexiglas panels, Dexion shelving, cables and plugs; but it is presented in front of a wall and needs to be looked at straight-on rather than in-the-round, which likens it to painting as much as sculpture. Chromolocomotion is 20 metres wide and 10 metres high, but it is only 50mm thick. It is really thin, like a canvas or a sheet of paper. It’s an irregular shape but I think of that more in terms of a paper cut-out than a sculpture.

SW: A lot of the inspiration for your work comes from the urban environment, and you use found and discarded objects. Can you tell us why that is?

DB: It is the world I live in and the environment I respond to. I love big cities and dealing with the built environment. Nature of course has its moments, but after a couple of weeks on holiday I’m itching to get back to the city. And the colours of the city are quite unlike the colours of nature, which is something that really interests me. The illuminated colours of the city are always best at night, and quite a lot of my work is concerned with the relationship between colour and darkness – seeThe Magic Hour, for example.

SW: Just looking at your CV it is possible to understand how busy you are. How do you relax and are colour and light involved?

DB: I love to immerse myself in novels and movies – but even then I’m always on the look out for interesting colour references. I listen to music a lot in the studio, but that isn’t particularly about relaxing. I love to eat and drink with friends – but then they are mostly artists and writers and curators. And I go to museums and galleries to look at art.

SW: Just like Cassone readers! Thank you for talking to Cassone.

Read Howard Hollands’ review of The Luminous and the Grey in this month’s ‘Art and Artists’ section in Cassone.