Brothers in art: The Nash brothers after the Great War 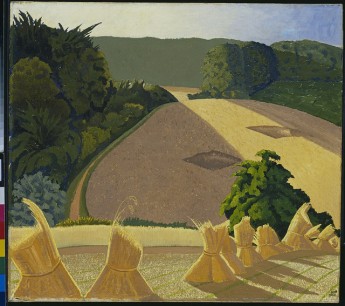 Brothers in Arms: John and Paul Nash and the Aftermath of the Great War by Paul Gough, with an essay by Gemma Brace

Paul Gough’s follow-up to A Terrible Beauty (Sansom, 2010) has been written to accompany an exhibition of the Nash brothers’ work at the Royal West of England Academy (Brothers in Art, 19 July–14 September 2014). It is not an exhibition catalogue, but in most other respects it might well be: it is well-produced, attractively priced, very well illustrated and, though packed with detail, written to be easily accessible to general readers and students. Those who want more are offered a text with very thorough footnoting, and a bibliography that accounts for all the extensive key texts on John and Paul Nash since the 1950s. If nothing else, the latter is proof of the enduring interest in Paul’s career, especially since the millennium, and Gough himself makes good a weakness in A Terrible Beauty, by addressing the excellence of John’soeuvre head-on, and by noting the deliberate omission of this information from most survey histories of British 20th-century art.

This book needed to be written for several reasons, not the least of which was the major contribution of both Nashes to British painting of the Great War, to the depiction of facets of the Second World War, and to highlight their very real, individual seams of creativity from 1919–39. Gough delivers this fraternal diptych easily enough: the nature of their respective commissions in both conflicts, their personal experiences during the Great War, and the manner in which those subjects were given expression are recounted with detailed clarity. Nonetheless, brotherly love came at a price. To give form to his subjects, Gough has had to introduce their unvarnished characteristics, some known, some much less so, and more than a few readers may find themselves uncomfortably facing a very different duo from the pair they thought they knew.

One of Gough’s fundamental inferences is that a wider audience has never properly known John Nash, and that his brother may have been in some way complicit in this. Paul was the elder and dominant Nash brother; John, without any formal training in art, has somehow come to be understood as a lesser mortal, partly because of his significant reputation as a wood-engraver of pastoral subjects, yet nothing could be further from the truth. As Gough delicately demonstrates, John’s natural facility as a painter in oil preceded Paul’s own by some years, and it is possible to suggest that the personal and professional discord between the brothers began as early as their commissioned work as War Artists c.1918. Gough draws some parallels between the Nashes and their contemporaries, Stanley and Gilbert Spencer (John and Gilbert were close friends), and the seeds of curiosity are sown.

The divergence between the Nashes is explained exquisitely in Gough’s analysis of the imbalance between their artistic aims during the inter-war period, and his (later) account of Paul’s increasingly difficult behaviour during the early 1940s. Paul’s soul-searching, not just as ‘a war artist without a war’, but, increasingly important, as a self-sustaining modern English painter, is offset by John’s self-discovery as a modern artist unusually capable of painting meaningful 20th-century British landscapes. It is fair to suggest that this is high on Gough’s critical agenda, and with reason. If readers conclude that Gough has achieved at least a partial re-evaluation of John’s output, this should be warmly greeted. His layered comparisons of Paul and John as humans, as artists, and as a combination of both are sympathetic, but there is welcome revisionism here: nothing is left out, and much added in this important account.

Brothers in Arms: John and Paul Nash and the Aftermath of the Great War

'Brothers in Art: John and Paul Nash' is at the Royal West of England Academy, Bristol until 14 September 2014