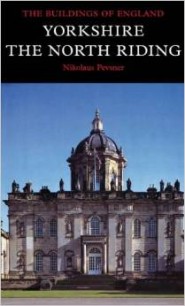 Pevsner was a major, if controversial, influence on post-war British architecture. A new book collates his many radio talks

Pevsner: The Complete Broadcast Talks: Architecture and Art on Radio and Television, 1945–1977 edited by Stephen Games

Sir Nikolaus Pevsner (1902–1983), the historian of art and architecture, gave many talks on the BBC from the end of the Second World War until September 1977. A German Jew, Pevsner had left Germany for Britain in 1933 when the rise of Hitler was making it difficult to find work. He later took British citizenship. Following a short-term research post at Birmingham University, he worked for a time as a buyer for a furniture shop. He was critical of British design and continued to write, and in 1936 perhaps his most famous single book, Pioneers of the Modern Movement: from William Morris to Walter Gropius was published (later republished as Pioneers of Modern Design). Writing, editing and lecturing became his career.

Pevsner was prolific, writing 32 of the 42 books in the ‘Buildings of England’ series himself and collaborating with other authors on the rest. His talks for the BBC included the Reith Lectures in 1955, in which his subject was ‘The Englishness of English Art’. He covered a wide range of art and architecture in his many other radio talks. In general, Stephen Games has used typescripts which remained at the BBC, and includes amendments and alterations made by Pevsner in such a way that the reader can follow how these came about and what was finally broadcast.

Pevsner’s Reith Lectures can still be heard via the BBC’s own website, but many of these talks are much less familiar and Games has done a great service in collating them in this volume.  Anyone wanting to follow up the content of a BBC talk given by Pevsner will find it here if it is still extant, from ‘Bavarian Rococo’ (Third Programme, 1954) to ‘The Dukeries’ (Third Programme, 1948), from ‘Ernst Barlach’ (exhibition review, Third Programme, 1961) to ‘Charles Rennie Mackintosh’ (Scottish Home Service, 1968). There is his review of a book on The Renaissance of the English Public House on the programme The Critics, and an appeal on The Week’s Good Cause on behalf of the Historic Churches Preservation Trust.

Also included are broadcasts in German put out by the BBC and by RIAS (Radio in the American Sector) Berlin, such as ‘New Trends in Architecture’ (Third Programme, 1957), although the texts for a number of these German-language talks are unfortunately missing.  It is, however, helpful that Games included such information as remains about the known broadcasts that are now  missing, as well as including a few scripts that were never broadcast, such as one rejected in 1961 on ‘The Medieval Mason’.

Games provides extensive introductory material for each script as well as to the whole collection, which addresses the controversial aspects of Pevsner’s career in great detail. Without wishing at all to detract from Games’ significant and much valued achievement as editor of the material in this present volume, there is a case for suggesting that this more discursive aspect of what is a substantial book might better have formed the contents of a separate publication.