Paul Nash: From the pastoral tradition to the trenches and beyond 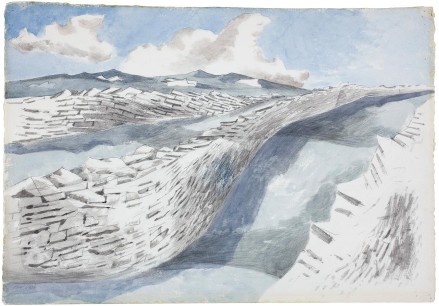 An exhibition at Piano Nobile Gallery, London (now on until 22 November) brings together 34 works on paper (almost all watercolours) from all periods of Paul Nash’s career. The exhibition includes loans from public collections including the Imperial War Museum and private collections, as well as pieces for sale.

Paul Nash (1889–1946) studied at Chelsea Polytechnic and the Slade. Before his experience in the First World War, Nash was in thrall to the pastoral tradition, especially artists such as Samuel Palmer. Watercolours from the post-Slade, pre-war period, such as The Garden at Wood Lane House, Iver Heath (1912), have an almost archaic stiffness, like a coloured illustration in a horticultural publication of a previous century. One can understand why Nash’s professors had reservations about their pupil.

The tender drawing of his sister Barbara (1910) shows that Nash was capable of portraiture, which comes as a surprise because the rare figures in his landscapes are generally awkward and unconvincing. The better works in the pre-war period are pared-down monochromatic compositions, such as those trees. During the First World War Nash’s palette became more assertive and contributes to the strength of the art. Many of these small mixed media works, most of which belong to the Imperial War Museum, were made in the trenches. These are the densest pictures in their tone and colour.

There is a rare chance to see Nash’s detailed preparatory watercolour (from a private collection) for his most successful Surrealist compositions, the Tate’s Harbour and Room (1931). River (1932) has a set of swings (which are more gallows that plaything) dominating the foreground, with a river wending away into the distance. It is reminiscent of Tristram Hillier’s work, both in appearance and atmosphere. It has the feel rather than the content of a Surrealist work, along the lines of Pierre Roy’s approach, which included everyday objects in unsettling combinations.

There is one example (cat. 23) of a painting containing organic forms, stones and wood in this case. These have always seemed the weakest of Nash’s mature works. Often Nash’s enigmatic found forms fail in pictures because – unlike Graham Sutherland  – he seems not to grasp the form as a whole and his ignorance prevents him describing the object in abbreviated pictorial form. Nash never seems terribly interested in the form, its organic qualities or the object in itself; mainly, his engagement is with the air of strangeness. Curiosity should inspire investigation. The curiousness of an object cannot be transmitted without the knowledge and technical skill that Nash so often lacks.

On the whole, Nash was at his best when he encountered a striking composition in life, rather than having to invent. Curiously for a Surrealist, Nash’s imagination was rather limited. The simple conjunction of a ship’s spars and pulleys in the foreground with a view of the Gibraltar coast in the background (cat. 25) is more effective than his fantasies. In Stone Sea (1937) – again, a composition observed rather than invented – stonewalls surge across undulating fields suggesting immense natural energy and generating a sense of exhilaration. It captures some of the power and wonder of the celebratedTotes Meer (1941). Modest in size and material though it is, Stone Sea is one of Nash’s perhaps two dozen really exciting and vital artistic accomplishments.

This display makes clear what an individual artist Paul Nash was and shows his strengths and weaknesses in depth. It was a wise decision to show only works on paper. The majority of the watercolours here are actually tinted drawings, with the pencil lines and shading providing most the description and the watercolour applied to give a finishing touch. Very few pictures rely on the properties of watercolour to achieve the artist’s intentions. Hampstead Gardens Under Snow (c.1938–9) demonstrates rare confidence in the medium of watercolour and uses unusually bold colour, leaving one wishing that he had pursued that approach. The final watercolour-tinted drawing of 1946, left unfinished at the artist’s death, is an example of greater assurance and more intuitive use of line of Nash’s last years. Overall, one sees these two pictures, Stone Sea and the scenes of the First World War and thinks of Nash’s sporadic successes and many missed opportunities.

The excellent catalogue (David Boyd Haycock, Another Life, Another World: Paul Nash Watercolours, Piano Nobile, hardback, 90pp., £30) will prove to be a scholarly resource as well as a reminder of this fascinating exhibition.

‘Paul Nash: Watercolours’ is now on at Piano Nobile Gallery, London, until 22 November 2014.