An artist in exile: Julio Larraz 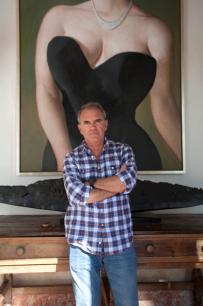 Julio Larraz, who lives and works in the USA, has developed a reputation as one of the most important Latin American artists of our time. Here he talks to Cassone’s Sue Wardabout his work

Sue Ward:  Your work includes paintings, sculptures and caricatures. Have you a particular favourite?

Julio Larraz: My absolute favourite is the one I am working on at the moment. It is a great pleasure to do art in whatever medium.

SW: Can you tell us how you came to be based in the US, and how you developed as an artist?

JL: I left my country in 1961 with my mother and my brother; my father stayed behind to make sure our trip was completed. I began to work with a friend at his studio in 1967; an artist of exceptional talent and patience. I started to work, doing caricatures for newspapers and magazines [The New York Times, Washington Post, Vogue, etc.], some of which you have mentioned, for the following ten years, till finally I dedicated myself exclusively to paint.

SW: Politically exiled from Cuba, do you still think of it as ‘home’?

JL: Cuba will always be home for me, a distant home. I am still an exile. It will be an exile until we have a democratic government.

SW: Seeing how Cuba is changing do you see yourself as ever returning?

JL:  Cuba is not changing. ‘The proprietors’ are getting older, and yes, [I see myself as] not only returning but trying to bring it back to this century, trying to resuscitate it from 56 years of decay, doing anything that is required of a citizen to help in any form.

SW:  What are the main interests and concerns that you address in your work and where do you find inspiration?

JL:  There are many, but the principal is an aim at depicting things that exalt beauty, harmony, peace, in this world of ours.

SW: You are known for your mastery of realism, can you tell us what or who has influenced your style of painting?

JL:  I think the list would not fit this page, for I have looked carefully at so many masterful works, since the cave paintings of the Magdalenians to Joan Mitchell, but the painters that have left an indelible mark have been Velazquez, Degas, Soutine, Salvador Dali, Picasso, Sargent, Edward Hopper and Andrew Wyeth.

SW:  Why are the human figures in your paintings only partially revealed, while their clothing is painted in some detail?

JL:  Sometimes I think it redundant to show a human, we all know what they look like; the clothes, ah! That’s different – they tell you all!!

SW: Your paintings involve interaction between yourself and your spectators. Is this because as a caricaturist you were used to depicting messages and posing questions in your work, and have continued this practice?

JL: My paintings never include the spectators simply because I always start with the premise, that if I like it, it is mine; so it is actually an intimate dialogue. It’s a kind of diary, that’s how it always was, before I discover the prize of fame and fortune, none of which I have, I am still thinking as when I started: That one day I will do a great painting!

SW: Can you tell us where you have exhibited and are there any places in the world where you would like to see your art displayed?

JL: I have exhibited in many cities in the United States, in France, Italy,  Monaco, Colombia, Panama, Mexico, Costa Rica and now in Contini Art UK in London.

One day I would like to exhibit in my own country, but definitely not now.

SW:  Julio  Larraz, thank you for talking to Cassone.

A number of books on Julio Larraz are available, including Julio Larraz by Edward Lucie-Smith (see Amazon link above for more information).