Malevich and the science of seeing 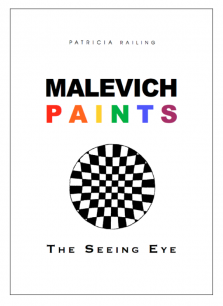 This summer, I pronounced myself  ‘President of Space’.(Malevich, 1917)

Malevich soared ahead on a trajectory of thought and vision that was unequalled in the unstoppable international race to stretch the medium of painting to its most radical limits during the first two decades of the 20th century. There were two parallel courses that he followed on this journey: there was the transcendent reach of the spirit to attain release from the  restraints of the material world, but there was also a deliberate, objective, almost scientific process of development, and this is the course that Patricia Railing takes as her subject in this important study.

It is well recognized that in the 19th century there were significant advances in the development of understanding of the scientific laws governing light and colour and the optical processes through which these are experienced by the human eye.  These theories became influential for many artists, from the Impressionists onwards.  Railing usefully visit’s the contributions to this understanding made by  M. E. Chevreul, James Clerk Maxwell and Ogden Rood but adds to these the possibly less familiar name of Hermann von Helmholtz, the German physiologist who conducted a major investigation into  how our senses operate.

Railing discusses how Malevich was guided along  the route to his radical transformation of painting by Helmholtz’s study of optics. She examines the pictorial decisions taken during his progression through the Neo-primitive and the Cubo-futurist phases of his stylistic journey towards Suprematism, demonstrating direct analogies to areas of investigation undertaken by Helmholtz. In particular, she sets out to interpret many of the diagrams in Helmholtz’s published findings as directly influential on the artist.  The two are both concerned with questions of  ‘sensation’: how lines, planes and colours are directly received by the eye and frequently misleadingly interpreted as optical illusions of relative size and distance.

Both Helmholtz and Malevich were interested in how one experiences afterimages of complementary colour after exposure to bright colour. This seems particularly relevant to Malevich when he observes the effects of his planes of saturated colour in his Suprematist paintings, astonishing himself with sensations of cosmic space: ‘My new painting does not belong exclusively to the earth’.

There are, however, undoubtedly problems with this thesis. Nowhere does Malevich record any direct indebtedness to Helmholtz and unfortunately his library and personal papers were destroyed (when Malevich was arrested and imprisoned during the 1930s, accused of  promoting ’Formalist’ art, contrary to Marxist ideology). On the other hand, he uses certain technical terms that are also employed by Helmholtz, and often his preparatory sketches are persuasively comparable to the technical diagrams. Furthermore, Malevich appears to have used painted discs that could be spun to observe dynamic effects, and projected light in the case of his ’white on white’ paintings, which he termed ‘Colourless Suprematism’, techniques also described by Helmholtz.

Whether you are entirely convinced of the author’s claim or remain sceptical is perhaps less crucial than the benefit gained from the detailed diagnostic analysis devoted to individual paintings. These are still insufficiently examined and indeed little known in comparison with the work of other major contributors to the early 20th-century avant-garde.  A further bonus is the inclusion of a number of works in private collections reproduced here for the first time in this well illustrated and well-produced book.  It marks out for itself an important place in the literature of Modern Russian Art and would also appeal to any visitors to the recent Tate exhibition who might feel the need to learn more about how these astonishing works came into being.